Like most analysts, I track a handful of key indicators to monitor the markets. The 10-year Treasury bond. The 30-year mortgage rate. Valuation metrics on the S&P 600. And I use another indicator to track froth: electric carmaker Tesla (TSLA). 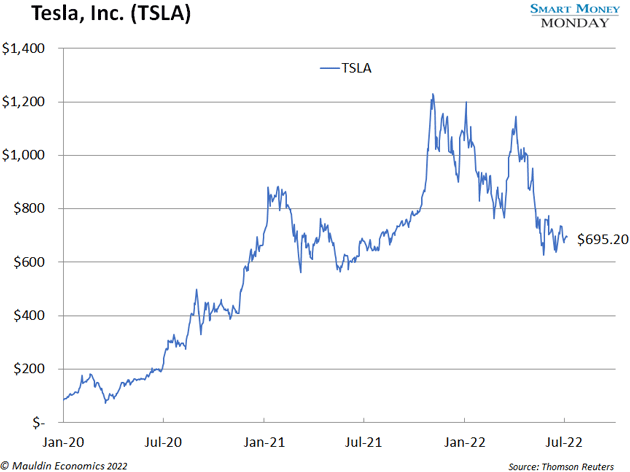 Just look at the signs. First, Tesla still has a $700 billion market cap. That makes the stock 60% larger than Facebook (META). Something is wrong there.

Facebook generated nearly $40 billion in free cash flow in 2021. Tesla generated $5 billion. (If you back out stock-based compensation, it was closer to $3 billion.) That’s a massive discrepancy. Why is Tesla’s market cap so much bigger? There’s no good reason except froth.

Musk is a charismatic visionary and a once-in-a-century entrepreneur. There’s no question about that. He works hard, and he’s created amazing companies.

At the same time, regular readers know I look for talented insiders when I buy a stock. I love companies run by ambitious owner-operators—think Warren Buffett at Berkshire Hathaway (BRK.A), Jeff Bezos at Amazon (AMZN), or Howard Schultz at Starbucks (SBUX).

But one man’s magnetism is an insufficient reason to buy a stock. You want to buy at a reasonable valuation, and with Tesla, we’re nowhere close. Yet, many individual investors seem to buy the stock as a pure bet on Musk, which continues to inflate the price.

Stellantis (STLA), formerly known as Fiat-Chrysler, says 100% of its European cars and 50% of its US cars will be electric by 2030. That’s 8 years away, but the company is aiming directly at Tesla.

Ultra-luxury automaker Ferrari (RACE) is also getting into the electric vehicle game. It expects to release one in the next few years.

Other competitors are already here. General Motors (GM) more than doubled its electric car sales last year. Ford’s Mustang Mach-E has helped it become the second-biggest electric carmaker in the US. And Volkswagen (VWAGY) CEO Herbert Diess says VW can sell more electric cars than Tesla by 2025, if not sooner.

It has plenty of room to fall before it reaches a sensible valuation.

Say Tesla were trading for 25X free cash flow. That’s a reasonable multiple for a fast-growing company. Then say it doubles free cash flow to $6 billion. At 25 times $6 billion, Tesla would have a $150 billion market cap. That would represent a wild 78% decline from here.

Now imagine Telsa were trading in line with Facebook’s valuation. It would have to fall over 90% to get there. Crazy.

Cisco was and is a great company. It generated revenue in 2000 and it generates revenue and profits today. But its dot-com era valuation made no sense. The stock crashed 84% when the bubble burst. And it still hasn’t returned to its 2000 high.

I see something similar playing out with Tesla (TSLA). That’s why I watch the stock closely to gauge how much froth is left in tech. And there’s still quite a lot.