It’s been a rough couple of months for copper.

Just look at this chart. As you can see, copper has tanked 28% since June 2. 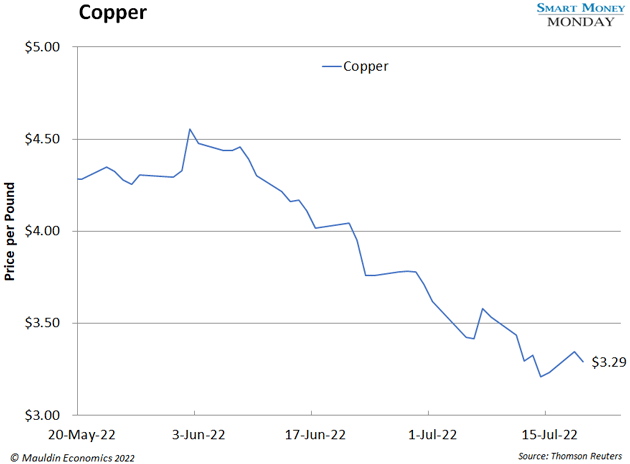 If you’ve read about “Dr. Copper” lately, it’s likely because analysts use copper prices to predict the health of the broader economy. Falling copper prices, like we’ve seen recently, point to an economic slowdown. But I’m interested in copper for a different reason…

Copper is the best conductor of electricity in the world. It’s essential to modern life. We use it in construction, appliances, consumer electronics, and transportation systems, among other end markets.

Like all commodity markets, the copper market is cyclical, driven by good old-fashioned supply and demand. Copper demand has remained steady for the past decade, coming in around 24 million tonnes last year. However, analysts expect demand to explode to 50 million tonnes by 2035.

Much of that demand will come from electric vehicles (EVs). It takes 4X more copper to make an EV than a gas-powered car.

I never miss a chance to rag on Tesla’s (TSLA) absurd valuation. But that doesn’t change the fact that the EV market is on fire. Global EV sales doubled last year, according to the International Energy Agency. And EV sales are expected to make up 50%+ of global vehicles sales by 2035.

This will boost demand for copper—for both the EVs and the power grid upgrades needed to keep them running. In fact, Goldman Sachs expects annual EV-related copper demand to jump from 1.5 million to 6‒7 million tonnes by the end of the decade.


As one executive at research firm Rystad Energy put it, “Lackluster investments in copper mining are stumping supply.” Rystad forecasts a global supply deficit of 6 million tonnes by 2030.

Even if producers start pressing to mine more copper now, it’s not the sort of thing you can do overnight. Building a new copper mine takes four to 12 years and costs anywhere from a million to a billion dollars-plus.

And that’s after the two- to eight-year exploration process—all while navigating tricky regulatory environments in countries that can be less than business friendly. (The world’s top four copper producers are Chile, Peru, China, and the Democratic Republic of Congo.)

In other words, rising prices won’t magically turn on new supply. And there’s very little new production set to come online in the next few years.

Copper prices have taken it on the chin. But copper’s long-term supply/demand picture looks robust, and prices should start creeping higher soon.

Neither is buying a speculative junior miner.

Regular readers know I focus on small-cap stocks, especially in my premium advisory, High Conviction Investor. But in this instance, I like Freeport-McMoRan (FCX) to play for higher copper prices.

Freeport is the fourth-largest copper miner in the world. Some of its big competitors like Rio-Tinto (RIO) and BHP Group (BHP) also produce a lot of other commodities. But Freeport generates 80% of its revenue from copper mining. The rest comes from gold and molybdenum (used in steel alloys).

Freeport mines copper in the United States, Peru, Chile, and Indonesia. Around 35% of its copper production happens in the US. Meanwhile, Freeport’s mines in Peru, Chile, and Indonesia employ a lot of people. Their respective governments also own 50% of Freeport’s local mining projects. So, it’s a win-win-win: the government makes money, Freeport makes money, and the employees have steady jobs.

Its debt traded at distressed levels. Many analysts thought the company would plunge into bankruptcy.

Fortunately, that didn’t happen. Today, Freeport has evolved into a much stronger company. For example, Freeport’s net debt has dropped 75% over the past year from $5.2 billion to $1.3 billion.

Instead of worrying about survival, Freeport is now focused on returning cash to shareholders. The company’s current capital return program calls for returning up to 50% of free cash flow to shareholders through dividends and buybacks. This is a smart play for Freeport, and it bodes well for shareholders.

The stock is cheap right now. It trades at around 10 times its 2023 analysts’ earnings estimates. 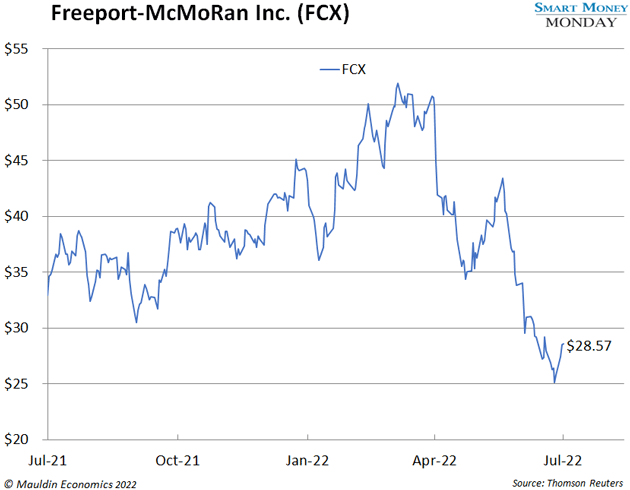 However, those estimates assume conservative projections on copper prices. If copper prices rise as I expect them to, Freeport will generate significantly more earnings and cash flow. That will flow back to shareholders, which is what we want to see.

For a long-term bet on rising copper prices, take a look at Freeport-McMoRan (FCX).