The markets, and the people who participate in them, do strange things.

In May 2020, when Swedish streaming service Spotify (SPOT) announced it was signing a $100 million deal with comedian and podcaster Joe Rogan, the stock immediately surged 36% through the end of June. And it continued to climb rapidly for months, peaking at $365 in February 2021. You can see that in the chart below. 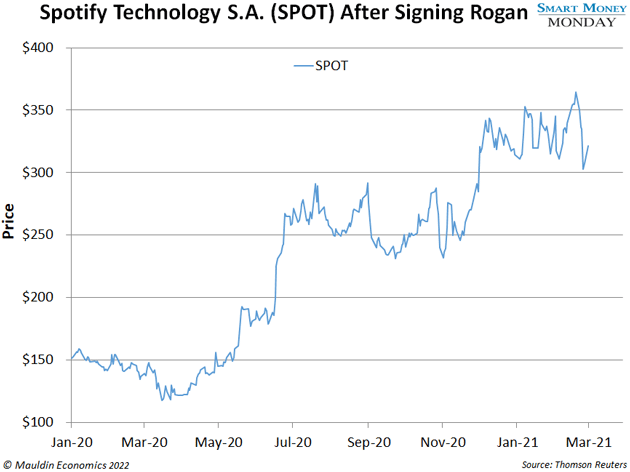 A year later, Spotify’s good fortune seemed to have turned upside down.

The stock has sunk 28% this year, as you’ll see in the next chart. And much of that decline came after folk rock legends Neil Young and Joni Mitchell announced they were leaving the platform because of Rogan’s controversial podcast. 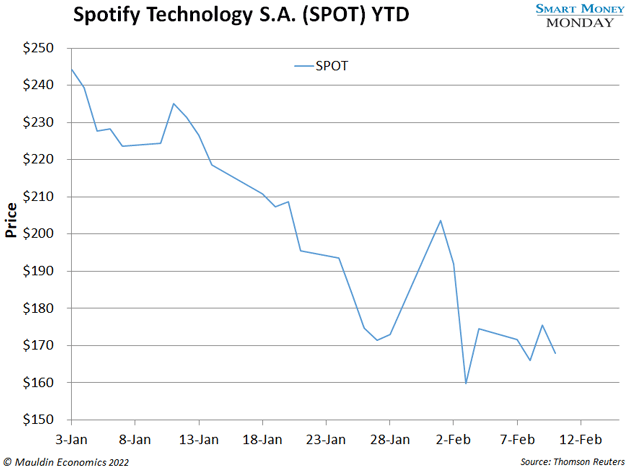 The consensus view is that Rogan is pulling the stock down. My view is different…

Streaming has, without question, transformed the music business. Revenue for the global recorded music industry peaked in 2001 at $23.6 billion. That figure includes physical record sales, streaming, and downloads. But by 2014, the business had bottomed out, with recorded music revenue plummeting nearly 50% to $14 billion.

Piracy was a big part of the problem. Why pay for music when you could get it for free?

Spotify’s business model is simple. Customers pay a flat monthly fee for access to nearly every song ever produced in human history. And at $5 or so a month, most households can afford it. That’s why Spotify has 180 million subscribers worldwide. 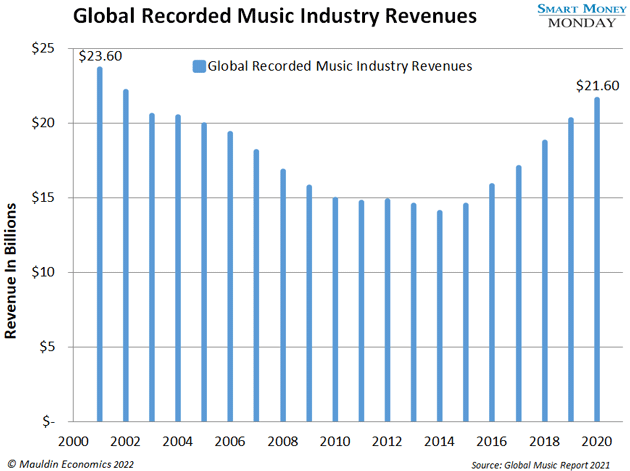 Almost all of that rebound growth came from streaming. In fact, streaming revenue surged 20% in 2020 alone, accounting for 62% of that $21.6 billion.

Surely, Spotify is raking in the dough?

All three are publicly traded. Universal Music and Warner Music are pure plays. But Sony’s record label is buried inside Sony Entertainment, which is also involved in video games, semiconductors, and other technology and media products.

The labels love this arrangement—they essentially get a royalty. For them, licensing music to Spotify delivers close to a 100% profit margin. It’s a great business.

Spotify’s business is about scale. It has 180 million paying subscribers. And it generates $2.8 billion in gross profit every year. That might sound like a lot of money, until you consider this…

In 2021, the company eked out around $110 million in operating income. In other words, for every $5 monthly subscription, Spotify’s pre-tax profit was… $0.05. A nickel.

That’s bad. The company should be making a lot more money.

Let’s do the same, and we’ll see if the stock is worth buying. Especially now that it’s tanked 47% in the past year.

Let’s assume Spotify can get to a 10% operating margin on its $11 billion in 2021 revenue. That’s $1.1 billion in operating profits. At $167, Spotify is valued at $32 billion. So, the stock is trading at 29 times my hypothetical operating earnings assumptions.

That’s still a bit too rich for my blood. Talk to me if and when it’s trading at $125—or roughly 25% lower than current prices. Then I might be interested.

As for the record labels—that’s a much better place to hunt. I’ll let you know if and when it’s time to step in and buy.