Three of my biggest winners have one thing in common…

They were all small-cap stocks when I bought them. And they delivered gains of 120%, 539%, and 850%, respectively. So, I always come back to small caps to hunt for extraordinary gains for my readers.


Energizer has been making batteries for over 100 years. Callaway has been selling golf clubs for 40 years. Both have solid track records, but they’re still 1,000 times smaller than a company like Apple, which has a $2.2 trillion market cap.

That means more potential to deliver life-changing returns. A $100 million company could grow tenfold and turn into a $1 billion company. But it would still be small enough to explode much higher. 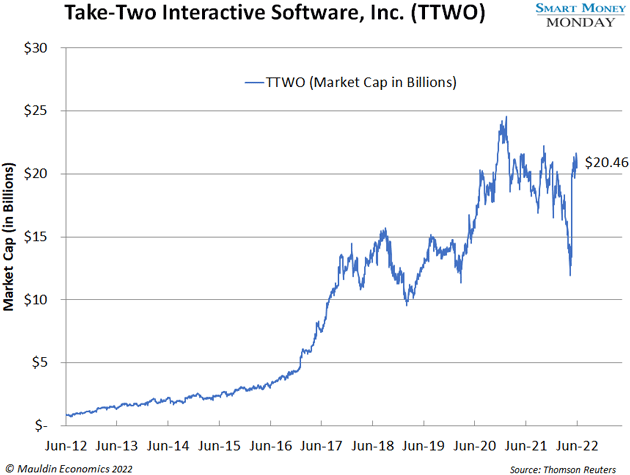 American Tower Corporation (AMT), which develops cell phone tower real estate, had a similar trajectory. In mid-2002, it had a $620 million market cap. Today, it’s ballooned to $117 billion. That’s nearly a 200-fold increase over 20 years, making American Tower one of the largest companies in the US. 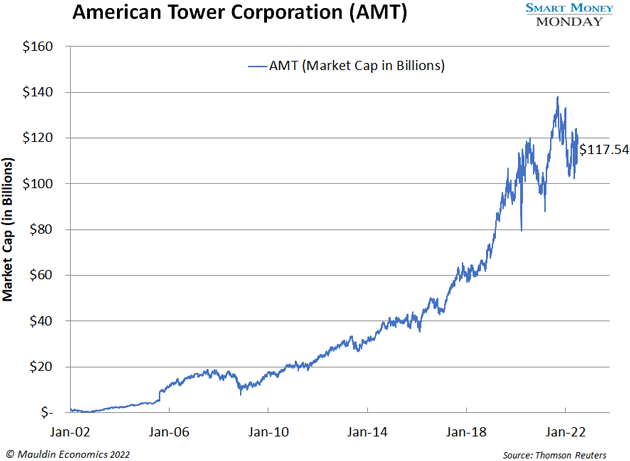 Don’t get me wrong—most small caps won’t turn into the next Take-Two or American Tower. But smaller companies often have more potential to deliver extraordinary returns.

Just think about a company that’s already huge, like Coco-Cola (KO). Sure, it’s a great stock to own. But it has a $270 billion market cap, and its business is quite mature. The stock is unlikely to double in the next year, let alone blast off like Take-Two or American Tower have.

On average, only five analysts cover each small-cap stock, according to Capital Group. Large caps, on the other hand, are covered by an average of 19. And a company like Apple has dozens of analysts following it.

When fewer analysts cover a stock, you have better odds of finding a great opportunity before everyone else does and drives the stock higher. Only a handful of analysts covered American Tower when it went public. Today, over 16 do.

It’s no coincidence that three or fewer analysts cover most of the stocks I recommend. There are simply more opportunities in that niche for individual investors who can do the legwork of analyzing the stocks themselves (or know someone who can do it for them).

First, I look for companies without a lot of debt. This can be tricky, since small caps often carry more debt than larger ones. And debt can cut both ways—it can magnify returns or wipe them out. But as a general rule, you want small caps with very little debt.

Second, I look for talented operators or investors. The best small caps often have insiders with serious skin in the game. First Citizens BancShares (FCNCA), which I first recommended here in February, is a great example of this. Chairman/CEO Frank Holding and his family own 27% of the company. It’s the largest family-controlled bank in the country. Their goals align directly with ours.

Third, I look for cheap small caps. That means quality, undervalued companies that are “on sale” for one reason or another.

Maybe the stock is having a “Chipotle Moment,” where a great company trades at a discount because of a rare, temporary problem. Maybe a broad market correction, like we have now, is pulling it down. Or maybe investors just haven’t caught on yet. Whatever the reason, you want to buy small caps that are cheap relative to the company’s earnings.

Finally, I look for growth potential. Maybe the underlying industry is growing, and the company is positioned to ride the wave higher. Or maybe it’s growing through shrewd dealmaking—again, like First Citizens.

Investors have a unique opportunity right now. I don’t have to tell you that stocks have pulled back quite a bit this year. But as I’ve been saying for weeks, this is an exciting window to buy small caps—the best in two decades… if you’re selective about what you buy. Learn more about the best small-cap opportunities I see now by clicking here.