A few years back, I was in Brussels, Belgium, enjoying a beer with a friend. The same beer they served at his primary school.

I thought he was kidding. Then he explained that Belgian teens were enjoying beer in primary schools as recently as 1991.

You can trace this quirky custom back to the Middle Ages, when monks figured out that drinking beer was way safer than drinking the water. The distillation process killed off the disease-carrying bacteria that was commonly found in the drinking water.

And it wasn’t just children. Pretty much anyone who could afford to would drink beer rather than risk their life with contaminated water.

The practice began a slow death when Belgians developed water treatment in the early 19th century. Still, the beer-obsessed Belgians continued the table beer tradition until the end of the 20th century.

The Search for Blue Gold

We’ve come a long way from the time of drinking table beer all day.

Today, almost every country on the planet has public utilities that handle the treatment and distribution of water.

Having visited 32 countries, I can say without a doubt that water quality varies by country. (Looking at you, Mexico.)

But that doesn’t change the obvious: People need and will pay for access to safe drinking water.

Water is one of those absolute essentials to sustain all life on Earth. So, it’s no surprise that the treatment and transport of water is a very stable business.

And the stability of the water business will only rise as two events collide—population growth and scarcity. As the global population expands, it must grapple with a shrinking supply of fresh water from rivers, lakes, and aquifers.

When climbing demand for a resource meets falling supply, it means the price for that commodity will rise. And that’s good news for one of my favorite segments of the water market.

A Flood of Profits for This US Water Stock

We already need every last drop of water we can find. And we're about to need a lot more.

There are 327 million people in America today. By 2050, the US population is projected to climb as high as 440 million. So, the US government is investing heavily in water infrastructure.

PricewaterhouseCoopers estimates that private spending on drinking water infrastructure will total $60 billion by 2027. Over the next 25 years, total spending on wastewater treatment alone will exceed $10 billion per year.

Steady and predictable investment like that is a key reason why American water stocks are some of the safest investments on the market. Many offer solid returns, too.

Take Middlesex Water Co. (MSEX) for example. The company is one of the oldest water utilities in the US. But even though the business started in 1897, the stock has been pumping out solid returns for years. I told subscribers of my premium investing newsletter Yield Shark about MSEX back in September 2019. Since then, the stock has delivered a solid 31% return: 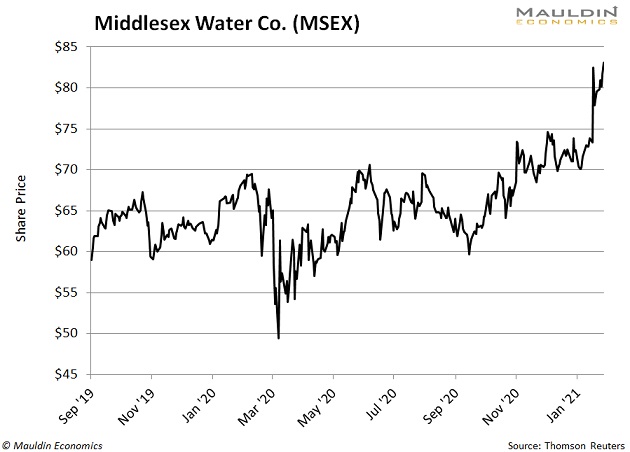 Not bad for a low-risk utility play. But there are plenty of others that are a great fit for any investor.

With the stock market trading near all-time highs, investors looking to diversify into lower-risk stocks should take a hard look at water stocks.

If you prefer to get some broad exposure to the water market, consider buying the Invesco Water Resources ETF (PHO). It holds everything from utilities to infrastructure companies, and it pays a small 0.5% dividend yield.

Personally, I usually prefer buying individual stocks because they offer more upside. And you need look no further than PHO's holdings to find three stocks that offer waves of profits.

Oil’s Going Higher… and Taking These 3 Stocks with It

How to Cash In on “GameStop Populism”

These Space Stocks Are Going to the Moon

A timely look at the stock market—with actionable ideas from our resident income expert and senior analyst. Get this free newsletter in your inbox every Wednesday!