The Nasdaq entered correction territory after its 10.1% slide in the last month.

Of course, the tech-heavy index bounced out of correction mode almost as soon as it entered it.

But there was still plenty of time for a series of "Don't Buy the Dip. Sell the Bounce!" headlines to hit the tape.

I get it. Tech stocks have been on an incredible run. 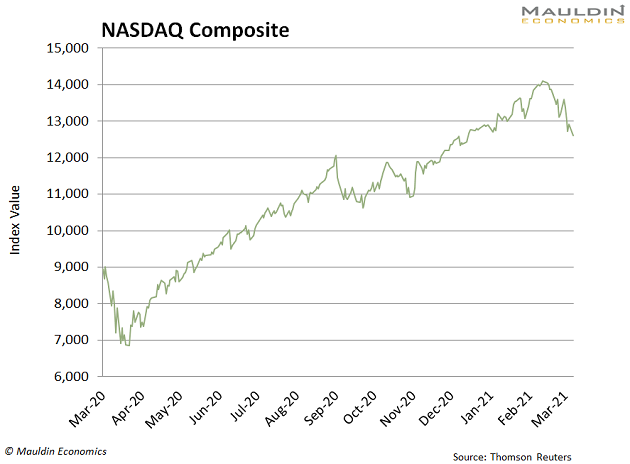 Look, I'm a fan of bagging big profits when you have them. I recently recommended that my Yield Shark members grab a 40% gain in pipeline giant Enterprise Products Partners (EPD) after just three months.

The point is, we didn't cash out because of fear. Rather, we saw an opportunity to bank a big, fast gain… and to rotate that cash into a new position with even bigger long-term potential.

What's Gotten Everyone So Spooked?

There is one culprit for the correction-causing trading action: rising interest rates.

The yield on the 10-year Treasury note has sharply to 1.56% since bottoming last August: 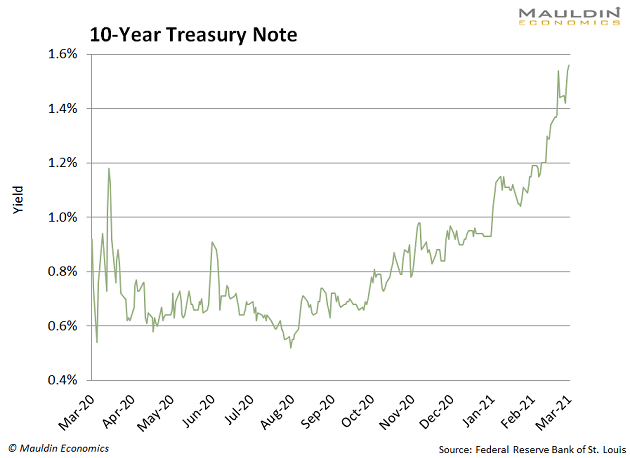 Interest rates are rising because investors expect strong economic growth in the second half of the year. When interest rates rise, the future cash flows of businesses must be re-priced to account for the new risk-free rate.

What this tells me is that anyone who gets spooked and sells the bounce is about to miss out on more upside.

The Stock Market Is Still in Great Shape

There are three main reasons I'm still bullish on stocks.

The first is that the intense selling the last few weeks has been confined to certain “high-flying” technology stocks.

It’s true the Teslas (TSLA) and Pelotons (PTON) of the world gave back 30% of their gains in the last month: 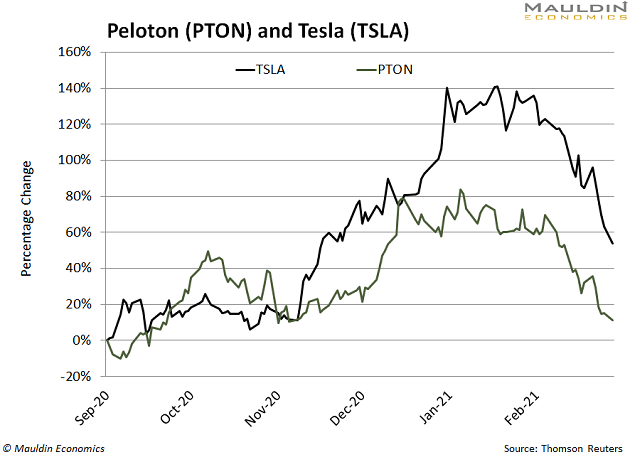 But certain “old economy” dividend payers have held up well, particularly in energy and big banks.

The Vanguard Energy ETF (VDE) and iShares US Financials ETF (IYF) are up 19.2% and 5.2% in the last month, respectively: 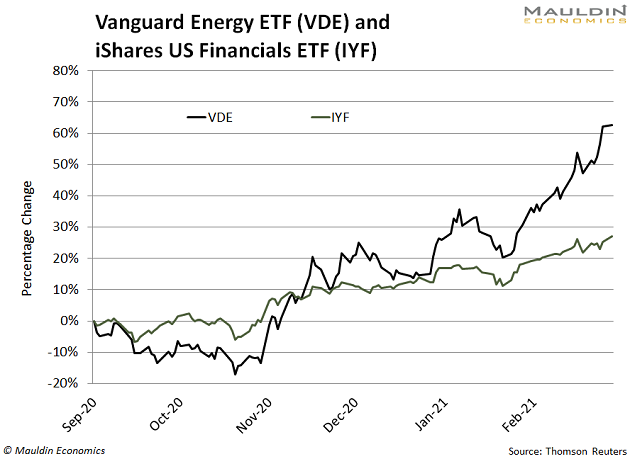 Second, while rates have surged, it’s highly unlikely they will rise much further.

While Peloton went down 30% in the last month, the 10-year Yield went up 30% in that same timeframe.

With such an attractive yield, international buyers will likely start buying US debt soon.

One of the most important ways to value the stock market is the CAPE ratio for the S&P 500. It’s like the price-to-earnings ratio, except it’s adjusted for inflation and averages the earnings (or “E”) over a 10-year period: 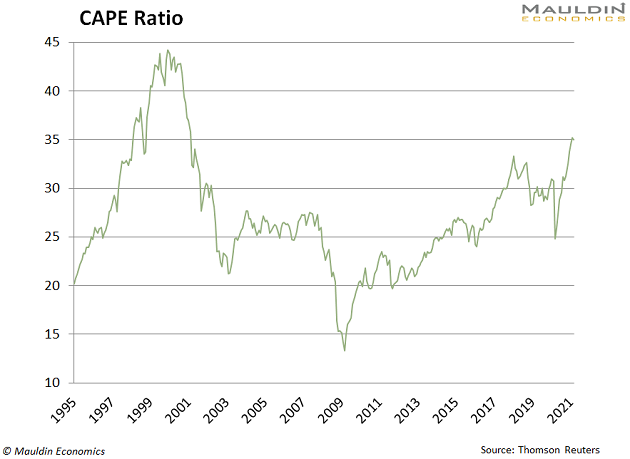 Generally, a high CAPE ratio suggests an overpriced market and low returns. But right now, the CAPE ratio is well below the highs seen during the height of the tech bubble in March 2000.

You don’t have to agree with my analysis… stocks could always go lower.

These Financial Giants Are Saying “Buy!”

David Tepper is best known for his Appaloosa fund's 132% return in 2009. While that was his best year on record, he’s still one of the most consistent and brightest financial minds on the planet.

In a recent interview with CNBC, Tepper claimed he’s getting bullish on stocks. He’s confident the move in yields is over and should stabilize “in the next few months.”

Tepper thinks Japan—which has been selling US debt for years—may start buying US bonds now that the yields are becoming attractive again.

If we start to see yields cap out or start falling, there will likely be a surge in stock prices across the board. That’s especially true since—according to Robert Shiller—stocks are reasonably valued.

In an essay for The New York Times, the famed economist explains why the stock market is reasonably priced at current levels.

Shiller won the Nobel Prize for economics in 2013 partially for his research on asset prices and the CAPE ratio.

He contends that while stock prices are currently high, they are still “fairly reasonable right now.”

A Trio of Stocks You Can Buy Right Now

A lot of people are still selling. But with some truly smart minds hitting the “buy” button right now, there are a few industries set to benefit.

I mentioned earlier how energy stocks were benefiting from the rising rate environment. The top firm on my screen right now is Magellan Midstream Partners (MMP). The company operates pipelines in the central and eastern US.

What puts MMP high atop the winners' list is its 9.9% dividend yield.

And while the three-year average payout ratio is a little high at 85%, the company’s solid free cash flow growth and balance sheet help bolster the case for the payout.

It’s also a key reason why MMP scored a respectable 84/100 on my Dividend Sustainability Index (DSI).

Next, financial stocks are shaping up to run as well, thanks to the $1.9 trillion stimulus package that’s set to pass this week. That’s great news for payment processors like Mastercard (MA).

As the world’s third-largest payments company, Mastercard processed $4.8 trillion worth of transactions in 2019. And while the company offers a mere 0.5% dividend yield, the long-term growth for the firm outweighs anything lost in dividend income.

But if you want to add a solid technology company that’s actually seen its shares rise over the last month, look no further than Oracle (ORCL).

The IT giant generates over 80% of its sales from cloud-related products. Oracle also secured a bid from TikTok—the wildly popular social media app that’s been all over the news lately.

And while the tech sector has taken a dive over the last month, ORCL has bucked the trend. In fact, the stock is up 14% in the last month. On top of that, it yields 1.4% along the way.

With stocks and inflation set to rise, these stocks are set to move higher with them.

Any would be a solid investment, but they’re an even better investment thanks to the recent pullback.