Behind Door A, you’ll find cheap, battered “value” stocks. You can buy ’em and hope for a quick pop. And if one pops, you sell and move on to the next one.

Then you’ve got Door B, where “special situations” live. This is where Smart Money Monday readers most recently took advantage with my buy recommendation on Twitter (TWTR).

(By the way, congrats to everyone who followed my guidance. I loved seeing all the reader mail flood in!)

I’m always on the lookout for special situations, and I’m ready to play them when the returns make sense.

But today’s opportunity lies somewhere else. It’s behind Door C, where a sneaky good company in a sneaky good industry is trading at a discount.

Even the greatest business in the world will be a poor investment if you overpay for it.

Right now, as you’ve likely seen, former market darlings are getting hammered. Many are high-quality companies, too, but their valuations got way ahead of reality.

Some are starting to come back down to earth, though. For example, we took a swing earlier this summer on Starbucks (SBUX). I consider Starbucks to be a high-quality business trading at a sensible valuation.

Same goes for today’s pick, which has higher margins than many market darlings yet trades at a cheap multiple of earnings.

Looking at Starbucks, every dollar of the company’s revenue in 2021 was converted to 17 cents of operating income. That makes for a 17% operating margin.

For every dollar of revenue that Microsoft generated last year, it managed to keep 42 cents of it before interest expenses. That makes for a healthy 42% operating margin. 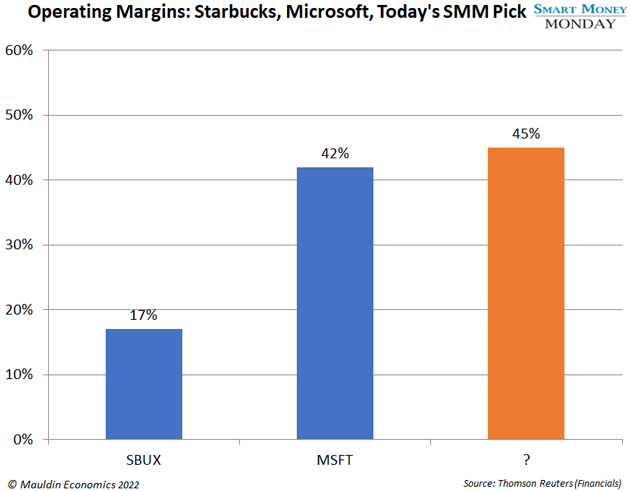 Microsoft isn’t immune to the bear market we’re in now. Its stock is down 30% year to date. Currently, it trades for 24X net earnings. So, despite being a high-quality business, it has not been a sound investment.

Again, even great companies can be bad investments if you overpay.

Microsoft might work from here. But there’s another business I prefer, and as you can see in the chart above, its operating margins top giants such as Starbucks and Microsoft at 45%.

Oh, and it trades a whole lot cheaper, too...

All About the Rails

Did you know railroads are one of America’s most profitable industries with a 28% profit margin?

Railroads are key to our way of life, with 40% of all gross tons of long-distance freight moved by rail. Plus, rail is the cheapest way to move freight and the most environmentally friendly.

North America currently has 7 “Class I” railroads. In the West, we have Union Pacific (UNP) and BNSF (owned by Berkshire Hathaway). In the Midwest, there’s Kansas City Southern (KSU). In the East, we have CSX (CSX) and Norfolk Southern (NSC). And up north in Canada, we have Canadian Pacific Railway (CP) and Canadian National Railway (CNI).

Of all the railroad stocks mentioned above, the one I recommend is CSX (CSX).

In 2021, every dollar of revenue at CSX converted to 45 cents of operating income. That makes for a whopping 45% operating margin. For a big, clunky, and “old” business, that’s incredible.

CSX certainly isn’t valued like the high-quality business it is. Despite having higher margins than software giant Microsoft, CSX only trades for 15X analysts’ estimates for 2023 earnings. 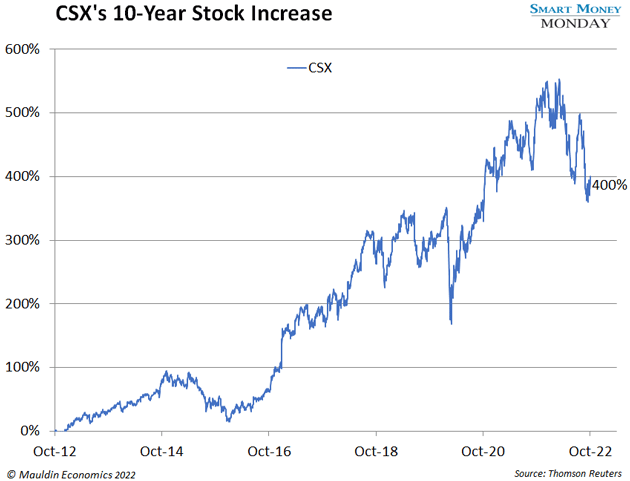 Outside of being cheap on forward numbers, I think there is longer-term upside as more manufacturing is “reshored” and “near-shored.” All of that bodes well for CSX.

Sure, there may be some near-term chop due to union negotiations. However, I believe all of that will get resolved and CSX won’t have its margins whacked. Any increased labor costs will more than likely be passed on to its customers with higher prices.

P.S. Did you see my colleague Jared Dillian’s big new prediction about the direction of the markets? If not, you may want to check it out here. From my time following Jared’s work, he’s right far more often than he’s wrong.

To see his latest big call on the markets, just click here.