Oil execs are walking on eggshells.

They’re being attacked for “price gouging” at the pump...

And all this backlash means oil execs have to be extremely careful about what they say and do in public.

They can’t be direct and blunt—it would give their detractors more ammunition!

Fortunately, we have an excellent, unfiltered source of information that reveals what these execs really think.

That’s important because not only are their thoughts very telling...

I believe it’s further proof that we’re still in the early innings of a multi-year rally in energy stocks.

Let me explain why... and share my top way to cash in.


Remember: You won’t get the full energy story by turning on CNBC...

But you will by turning to the Dallas Fed.

See, every quarter, the Dallas Fed conducts a survey of top energy executives at about 200 oil and gas firms.

Which means these execs can say how they truly feel, giving us a clear picture.

Here were some of the top quotes in the second-quarter 2022 survey:

“The government's anti-oil, anti-gas, and anti-pipeline stance has caused us to not pursue expansive projects.”

“The country’s energy policy is on the wrong path. Picking wind and solar and going faster in this direction is a mistake. The country should embrace domestic oil and gas.”

“Politics are affecting our business, with both sides pushing ridiculous agendas with no management or understanding at all.”

These executives are calling it like they see it.

There are two main reasons.

The first is government stupidity.

The consensus is that we don’t need fossil fuels anymore.

But that couldn’t be further from the truth.

Today, 83% of the world’s energy supply still comes from oil, gas, and coal. That number has barely budged in over a decade. 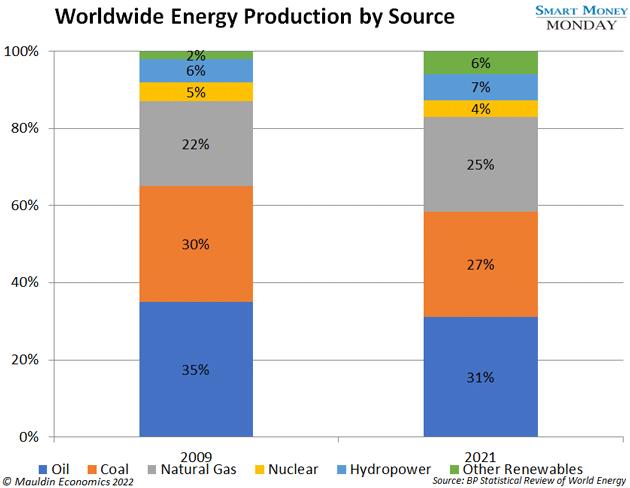 This “green” future everyone talks about is still a long way away.

Even if EVs grew to 5% of the market, it wouldn’t dampen oil demand by much. In fact, the International Energy Agency doesn’t expect global oil demand to peak until 2030.

Weeks after his inauguration, Biden took action against the energy industry... pushing a ban on new drilling leases for oil and gas on public lands and offshore waters.

As I wrote at the time, less drilling means less oil. And less oil with the same level of demand can only push the price in one direction: Up. It’s Economics 101. Remember what that top energy exec said: The government's anti-oil, anti-gas, and anti-pipeline stance has caused us to not pursue expansive projects.

Since my essay in October, the price of oil has climbed 25%. 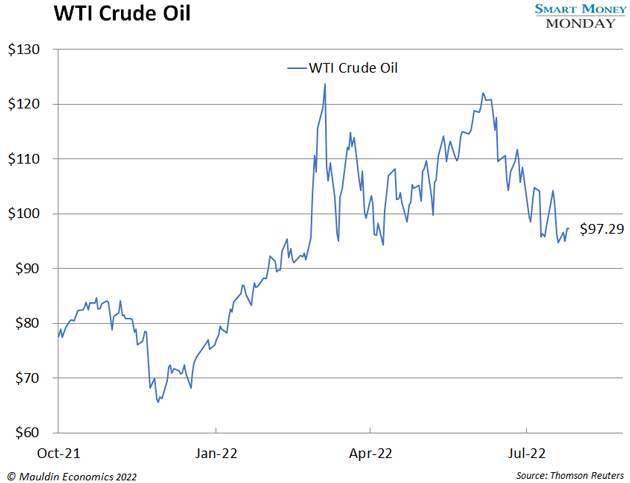 Next, I’m looking at what the energy management teams are doing.

Investors, management teams, and banks all got burned. Many companies borrowed billions they couldn’t pay back... and ultimately went bankrupt.

But now, management teams have completely changed their spending habits.

They’re returning cash to shareholders through dividends and share buybacks.

Oil majors like BP (BP), ExxonMobil (XOM), and Chevron (CVX) plan to spend $38–$41 billion on buybacks this year, according to the Financial Times.

In October, I recommended Chevron, ExxonMobil, Chesapeake Energy (CHK), and BP as smart ways to play this trend.

BP has been flat while the other three have risen 40‒50% each. Congrats on a nice call if you took advantage.

I believe this run is just getting started... And one of my favorite energy stocks today is Ovintiv (OVV), which I first recommended to Smart Money Monday readers in June. I own shares and continue to like what I see with the company. It’s profitable. It has a clean balance sheet. And it’s returning cash to shareholders.

Lastly, I expect Ovintiv to be included in the S&P 500 soon, which should provide a nice boost to the stock.