Energy has been on quite a run. 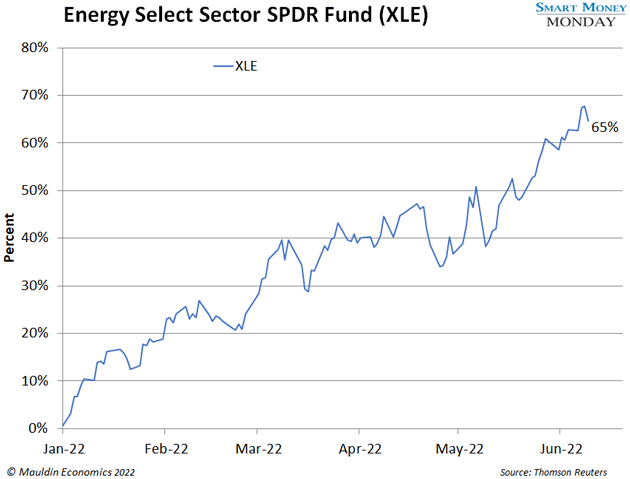 Yet energy stocks still account for much less of the S&P 500 than normal. You can see this in the next chart. From January 1990 to January 2022, energy made up 8.6% of the index, on average. 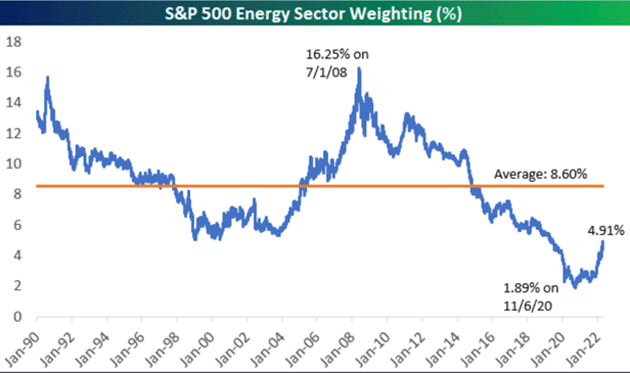 If they returned to their historical average market weight, all else equal, they would be 60% higher than current prices.

Of course, there is no cosmic force saying energy must make up 8.6% of the market. But there is a bottoms-up, fundamental reason I expect that to happen again: Energy stocks are too cheap.

That’s all well below the average S&P 500 forward earnings multiple of 17 times. Meaning energy stocks are much cheaper than your average stock, despite their recent runup.

One way to play this trend is to buy an energy index fund and call it a day. But when you buy an index, you get the average returns. Okay, but not great.

It’s the best way to capture the most upside.

I’ve written about some of my favorite energy picks in recent months. Chevron is one—I first recommended it in Smart Money Monday in October, and it’s shot up 70% since.

I also like Chesapeake Energy Corporation (CHK), a mid-sized energy firm out of Oklahoma. Shares have doubled since Chesapeake emerged from bankruptcy in 2021. It’s eliminated almost all its debt, and it’s generating loads of free cash flow—management forecasts $3 billion for 2022. It plans to pay out $1‒$1.3 billion of that in dividends.

Chesapeake has jumped 52% since I first recommended it. But at 7 times the average analyst EPS estimate for 2023, it’s plenty cheap. I own shares, and I still like the company at current prices.

Ovintiv (formerly Encana) is dirt cheap. The stock has almost doubled in the past year, yet it’s trading for 4 times 2023 estimated earnings per share.

This isn’t some small company, either. It’s not in the S&P 500 yet. But it has a $16 billion market cap, which makes it eligible. I expect the S&P to add Ovintiv by the end of the year. That would bring more buying activity since it’s the most widely held passive index in the world.

I recommend adding Ovintiv to your energy holdings. I will buy shares once my readers have an opportunity to get in first.

These companies have bolstered their finances since the last energy bull run. They’re generating lots of free cash flow. And they’re returning it to shareholders through dividends and buybacks.

Given the cheap valuations, energy could easily return to 8‒9% of the S&P 500—meaning energy stocks have a lot further to run. And, while I like the three energy players covered today, I’ve saved my top energy stock for my premium service, High Conviction Investor. It’s a small cap run by a savvy owner-operator, and it has a big leg up over its peers. Learn how to access the full High Conviction Investor portfolio here.