Remember the days of a 50¢ cup of Joe? When coffee meant the Folgers you brewed at home or the watery crud you got at a diner. That was before my time, but I’ve heard the stories.

The coffee culture I know is the brainchild of a Brooklynite named Howard Schultz. During a trip to Italy in the 1980s, Schultz became enamored with Italian espresso bars. Back in the US, he started his own coffee business, which purchased the Seattle coffee outfit he’d once worked for called Starbucks.

You know the rest—Schultz took the Italian espresso bar, Americanized it, and gave us the frappuccino behemoth. Regardless of how you feel about saying “venti,” the fact is…

It’s the world’s dominant coffee brand, with 30,000+ stores across the globe. It has huge profit margins. And its loyalty program means it effectively doubles as a big bank.

Last week, we talked about the bloodshed in the markets. The S&P 500 has dropped 19% YTD. The Nasdaq-100 has dropped 28%. And many tech names have plummeted 50%+ from their recent highs.

But the market is hammering good and bad companies alike. This creates an opportunity to buy quality companies like Starbucks at discounted prices, which is what I’m recommending today.

This is great news—Schultz has a long history of delivering value to shareholders. During his first run as CEO from 1992–2000, the stock returned 1,184%, beating the S&P 500 many times over. 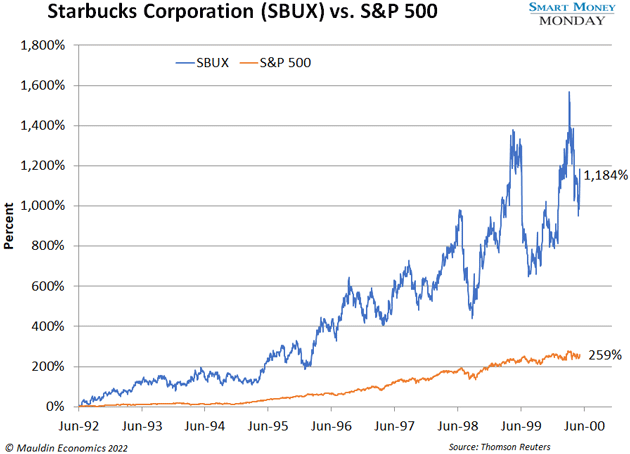 After stepping down to focus on other projects, Schultz returned as CEO in 2008. He made some big changes, added new products, and helped grow the business in China.

Now, Schultz is back for a third run. And he’s buying a lot of stock, which shows his confidence in the company’s long-term prospects. Since May 10, Shultz has purchased $15 million worth of Starbucks’ shares at or around current prices. That brings his total stake to around 37.9 million shares worth $2.7 billion.


Starbucks has a union problem. Workers at many of its individual stores are trying to unionize, some successfully. This is bad for Starbucks. A unionized workforce allows employees to dictate how things are run, which can hurt the company long term.

The tight labor market is giving unionizers a leg up right now. But the labor market should cool as interest rates go higher. As that happens, unionization efforts should fizzle.

In other words, the unionizers won’t win because Schultz won’t let them.

Operating in China presents political risks for any business. You’re at the mercy of the Chinese government, as we’re seeing right now. Because of China’s zero-COVID policy, Shanghai, the third-largest city in the world, is 100% locked down. That’s bad for every business there, including Starbucks.

This is a classic “Chipotle moment,” where a great business faces a temporary problem. Eventually, China will reopen, and Starbucks will resume full operations there. So, I’m not too concerned.

The broader market correction, plus the union push and China problems, have sent the stock down 37% YTD. However, we’re talking about a powerful brand with a rock-solid balance sheet and a strong owner-operator who’s loading up on shares.

Again, this is a great chance to buy a world-class business at beaten-down prices. At $71, you’re paying something like 20X next year’s earnings.

Starbucks is a buy at current prices.

A few of you asked about the dividend yield for Pioneer National Resources (PXD), a mid-sized energy company I mentioned a couple weeks ago.

Pioneer has a unique dividend policy, with a steady recurring dividend and a variable dividend. The combined dividend for Q1 2022 is $7.38. Multiply that by four, and the stock has a yield of 11.1%.

If you look up the company on Google Finance or Yahoo Finance, you won’t find information on the variable dividend. Those are good places to start your research, but they are notoriously incomplete. You can read more about Pioneer’s dividend in its recent earnings release here.