People keep asking me if this is the top.

When friends outside of the financial world read headlines warning that “a stock market crash is coming,” they usually turn to me for answers. I’ve been fielding a lot of those questions lately.

I get why they’re concerned. The S&P 500 has climbed 23% this year to new record highs. Surely, this can’t go on forever. 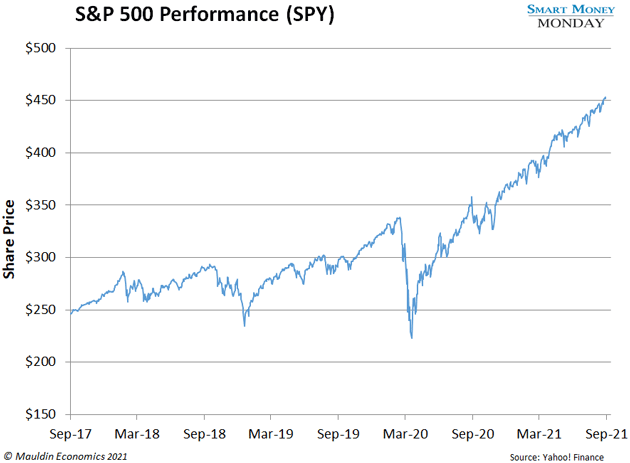 So, are we on the cusp of a bear market?

The reality is, I don’t know. And neither does anyone else. So, I don’t waste energy trying to predict the future of the entire market.

A better question, as one subscriber recently asked, is…

The short answer is: Yes.

There’s a reason I steer clear of ETFs and other forms of passive investing. I don’t want to get wiped out with the market.

Instead, I’m super picky about what we buy here at Smart Money Monday. I dig into every stock I recommend, and I make sure we buy it cheap. That’s always important. But it’s particularly important going into a bear market. It’s one of the best ways to protect yourself.

Now, by “cheap” I don’t mean the actual stock price. I’m referring to its valuation. Meaning, is the company worth more than we’re paying for it?

Now, invert that, and you could say that your savings account investment “trades” at 50–100 times earnings.

I bring this up because analysts typically value publicly traded stocks on a multiple of earnings. For example, a stock that trades at 10 times earnings would have a yield of 10%.

The takeaway here is: A stock that trades at a lower earnings multiple is cheaper. So, that’s one of the things we’re looking for when we buy.

In a bear market, the market darlings, meaning stocks trading at 200 times earnings or thereabouts, will almost certainly get whacked back down to Earth.

We saw a lot of this during the dot-com bubble and subsequent crash. Take Cisco Systems (CSCO), for example. It was trading at 200 times earnings at its March 2000 peak. When the S&P 500 dropped 9% that year, Cisco plummeted by 29%. And from its peak that year, it dropped over 50%. 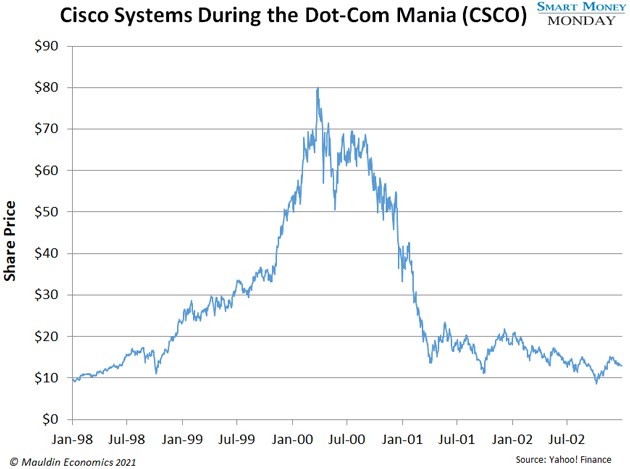 For me, a company’s earnings is my North Star. I’m not interested in alternative metrics when I value stocks.

Knowing the company that you’re buying—and buying it cheap—is one of the best ways to protect yourself in any market, not just a bear market.

When I recommended Franchise Group (FRG) in July, it was trading around 10 times earnings. That’s a very reasonable valuation. As earnings grow and CEO Brian Kahn executes his strategy, I expect the market to reward Franchise Group with a higher earnings multiple. That would translate into profits for us.

It’s a similar story with iron and steelmaker Cleveland-Cliffs (CLF). I don’t focus on commodities much. But Cleveland-Cliffs is a high-quality business, and it was too cheap to pass up—it was trading somewhere around 5 times 2021 earnings. So again, we bought it cheap, and I expect that to translate into profits for us.

A potential bear market or economic downturn doesn’t particularly worry me. Buying in at a reasonable valuation protects us on the downside.

That brings me to another great subscriber question…

In any event, my Fairfax recommendation seemed to spark a lot of questions. Another subscriber wrote…

The bulk of Mauldin Economics readers are based in the US. So, I opted to give them the ADR. You are free to buy either stock.

That said, there is one benefit to buying the USD-quoted FRFHF. It has to do with how Fairfax presents its financials. When it provides its book value per share (the yardstick I use to measure performance), it’s quoted in US dollars. Every quarter, I compare the book value per share to the price of FRFHF to get an apples-to-apples comparison.

Thank you to everyone who sent in questions. As always, you can reach me at subscribers@mauldineconomics.com.