Trust me, you’re not alone.

I’ve been warning investors for months that a correction was coming. In fact, I recently had my readers take profits on many of our stock positions to prepare for a pullback.

I also had them buy one of the safest assets in the world: gold.

Gold has historically performed well when the stock market falls. Investors often pile into gold because of its “safe haven” status.

While I understand the logic, the data simply does not support the argument.

The Market’s Wisdom on Gold Is Flawed

The thinking on gold and interest rates is that when rates rise, investors will earn a higher yield on government bonds.

Let’s say that you buy a 10-Year Treasury note that pays 3% per year. That’s double what the same bond was paying only two years ago.

Gold, on the other hand, does not pay any yield.

It logically follows that investors will pull money out of gold and put it into yield assets like government bonds.

And that would be bad for gold.

The Federal Reserve has been hiking rates since late 2015. That means that gold prices should perform poorly.

But the data tells a different story.

Here’s What Really Happens to Gold

The rise of one thing as another thing falls is known as a negative correlation.

Real world data, however, shows that gold and interest rates rarely move like that.

According to market research firm Pension Partners, gold and 10-year Treasury yields have shown negative correlation only 44% of the time since 1920.

Since 1970, the two assets have shown a negative correlation only 28% of the time.

The record tells us the belief that gold must fall as rates rise is weak at best.

But let’s take a closer look at the history of gold prices and interest rates.

What History Says About Gold and Interest Rates

But hold on, because interest rates were on the rise during this period as well. In 1971, the 10-year Treasury note hit a low of 5.5%.

If anything, this period shows that gold and interest rates often rise together.

Here’s another example. While the 1970s saw the rapid rise of interest rates and gold prices, the 1980s was the exact opposite.

Yet again, interest rates and gold moved together.

We saw this same trend play out recently as well.

Gold and Interest Rates Have a Complex Relationship

Since 2010, real interest rates have been stuck near 0% and gold did poorly. 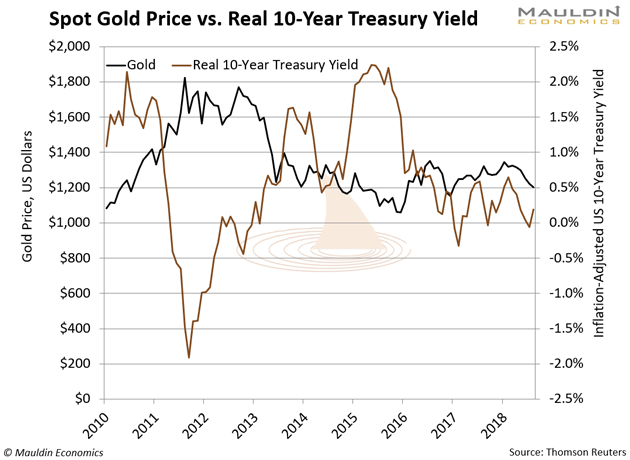 Other than their negative correlation in 2012, gold and rates have moved without any rhyme or reason for nine years. And that happened with real rates near zero.

Clearly, the correlation is not as tight as many believe.

In fact, it may be the exact opposite of what many investors believe.

Turning the Theory on its Head

Many companies sell bonds to raise money to fund their businesses. The interest paid on corporate bonds is closely tied to the interest rate on government bonds.

What’s also clear is that gold tends to perform better during periods of stock market weakness.

The Stage Is Set for Higher Gold Prices

We’re currently in the 155th month of the bull market in stocks.

That’s the longest bull market in US history.

We’ve seen stock prices become much less stable in the last few weeks. And rising interest rates is the main reason behind the stock market weakness.

If history is any guide, this means we’re entering a period when gold will perform well because:

I always keep 2% of my investible assets in gold. But during times of rising interest rates, I double this allocation to 4%.

My preferred way to add gold exposure is to own the SPDR Gold Shares (GLD) ETF.

So no matter what you do, make sure to add gold to your portfolio.

And above all else, don’t let rising interest rates deter you from doing so.