They are known as the Coca-Cola millionaires.

In the early 1920s, a Florida banker named Pat Munroe convinced his clients to buy shares of Coca-Cola (KO).

He saw that even in tough times, people would still have a few nickels to buy Coca-Cola.

Those who followed Munroe’s urgings made fortunes. His advice minted 67 Coca-Cola millionaires.

While investors reaped giant profits as the stock price climbed higher, the dividends they earned are even more impressive.

A Coca-Cola millionaire who hung onto his shares would be earning dividends miles higher today than he had been originally.

You don’t have to wait 100 years to earn massive dividend yields.

Let’s say, it’s January 1994, and you have some money that you want to invest.

But Coca-Cola has raised its dividend an average of 2.1% per year. 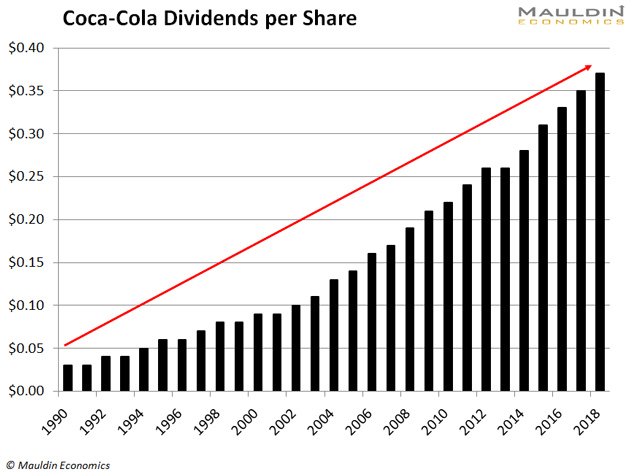 There are two reasons why Coca-Cola investors were rewarded with such impressive dividend yields:

And I’ve found a few other companies that act like Coca-Cola.

In my brand-new special report, I revealed three companies that are in growing markets. And they have a long history of boosting dividends.

They all have safe dividend yields over 5%. And if you hold them for 10 years, I think your dividend yield could easily hit 25% or higher.

Claim your free copy here and learn about these companies.

While I’m a big fan of those three companies, there is one more company I think is the best of breed.

It all comes down to knowing what people will buy no matter what’s going on in the economy.

Smartphones: The Opium of the Masses

The Coca-Cola of today’s generation is mobile data.

People can’t live without their phones, and the numbers prove it. 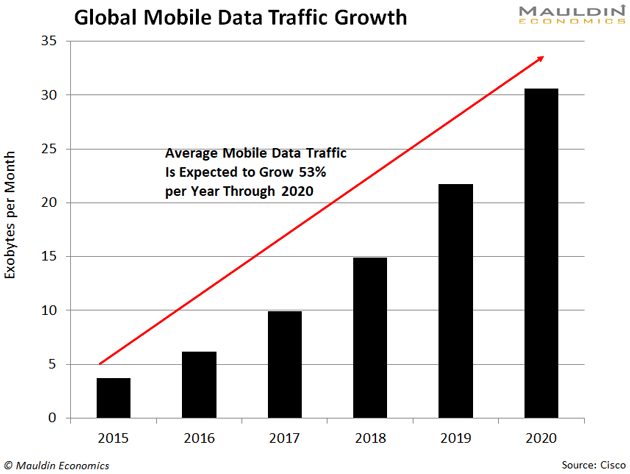 There’s no reason why this fast pace of growth will slow any time soon.

And companies that provide people with mobile internet access will keep profiting—even in a bear market.

There’s only one company in this industry that pays a safe big dividend.

AT&T Gives the People What they Crave…

The company services more than 100 million devices, including over 80 million prepaid phones.

The company gets 43% of its income from its wireless business.

This gives the company a steady stream of cash that will grow as mobile data usage grows.

AT&T is also set to be the first provider to roll out 5G technology. This next generation of wireless networks will be 1000x faster than today’s 4G.

But what I really like about AT&T is its dividend.

A Huge—and Safe—Dividend for Any Environment

My goal is to find safe and stable income investments for my readers.

Just because a company pays a high dividend doesn’t mean the company is financially sound. Too many investors make this dangerous assumption.

That’s not the case with AT&T and its 7.0% dividend yield.

AT&T has raised its dividend for 35 straight years by an average of 4.6% per year. 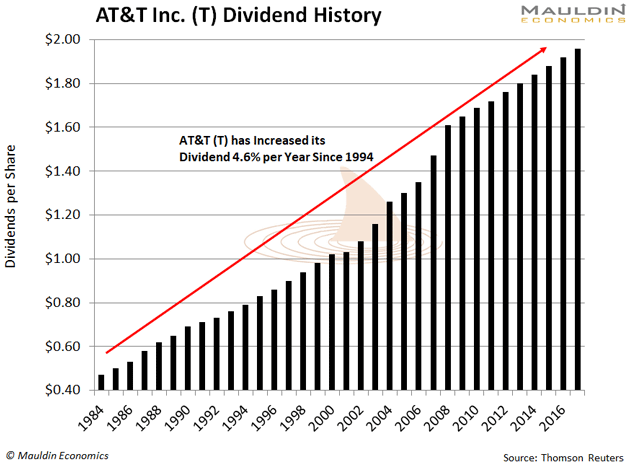 AT&T has a ton of cash and its dividend is only a small fraction of its earnings. Those two things tell me that AT&T will pay huge dividends for decades.

If you buy AT&T shares today—and the company hikes the dividend 5% a year—your dividend yield will be 11.4% in 10 years.

Think of it like planting an apple tree. The tree only yields a few, small apples when it’s first planted.

But as the tree grows over time, the more apples—or dividends—it will produce.

So plant your dividend tree today.