If it seems too good to be true, it usually is. But when I say you can juice your investment returns with the click of a button, it’s the plain truth.

I’m talking about reinvesting your dividends.

Sure, it seems like a minor thing. But if you’re not doing it, you’re leaving a lot of money on the table.

In fact, investors who reinvest their dividends can outright double their investment gains.

Let me show you how…

This Small Change Can Make a Big Difference

Every quarter, McDonald’s pays a dividend of $2.00 per share. That translates to $200 in income from your 100 shares.

When this happens, you have two options:

Now, McDonald’s trades for around $200/share. So instead of pocketing $200 in cash, you get one extra share.

Then you make the same smart choice the next quarter… and the next. True, it’s only one extra share each quarter. But over time, it makes a huge difference.

That’s because reinvesting your dividends takes advantage of compound interest.

Compound interest is the interest on your initial investment, plus interest on all interest earned. This means your interest—or in this case, your reinvested dividends—earns interest, too.

In other words, those reinvested dividends make your whole investment grow much, much faster.

Reinvesting Your Dividends Can Double Your Returns

Let’s walk through an example. 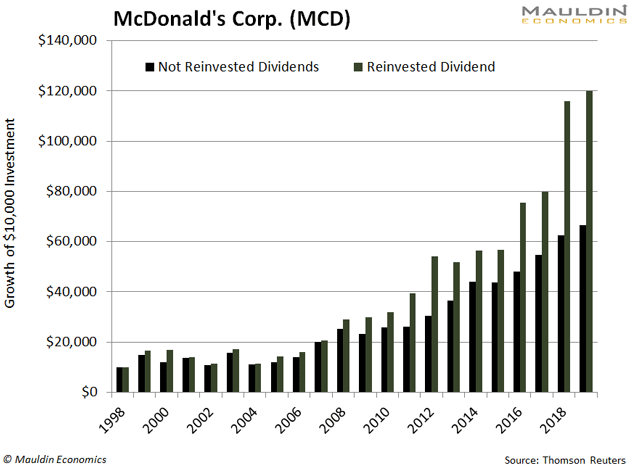 Now that’s remarkable. Your money grew almost twice as much. And the only thing you did differently was reinvest your dividends instead of taking the cash.

This Isn’t Limited to McDonald’s

Reinvesting your dividends does two things:

Over time, this leads to a lot more money.

Jim didn’t reinvest his dividends. But he still earned an annual return of 2.3%.

But you were smarter. You reinvested your dividends every quarter. So you earned an annual return of 5.3%. That’s more than twice as much as Jim earned.

This Isn’t Limited to US Stocks

This strategy is universally effective. You’ll make a lot more by reinvesting your dividends, regardless of the market.

Just look at the difference in returns from the world’s eight largest stock markets since 1993. As you can see, reinvesting dividends led to much higher returns across the board.

On average, people who invested in one of the eight major stock markets—without reinvesting their dividends—earned 4.3% annually.

Meanwhile, those who reinvested their dividends earned 7.1% annually.

The Best Stocks for Dividend Reinvestment

You can’t fight the math.

If you’re not reinvesting your dividends, you’d better have a solid reason why. Otherwise it’s like dropping $100 bills on the sidewalk. Just waste.

I think dividend reinvestment is a good idea for all investors—and at every point in the market cycle. That’s especially true when you own safe and stable stocks.

We’ve been talking about that a lot lately—the value of owning the highest quality dividend-paying stocks. Think Dividend Aristocrats and defense industry stocks. Or certain utilities and telecom stocks.

These stocks tend to do well no matter what’s happening in the economy or the markets. So when the next recession hits, something I expect in the not-so-distant future, and the broader market suffers, you will still own quality businesses that will make it through.

Plus, if you’re reinvesting your dividends, you’re getting more of a good thing, possibly at better prices. And you’re taking advantage of the magic of compound interest.

As you probably know, we’re in the midst of the longest bull market in US history. But I’m starting to see some troubling signs… particularly the Diamond Cross, an important indicator that’s preceded every recession over the past 50 years.

The Diamond Cross has a lot of readers worried. That’s why I’ll be hosting the Any-Weather Income Strategy Summit on June 24.

We’ll be discussing how to prepare and profit safely BEFORE and DURING what could be a prolonged bear market.

In reference to padd13ear’s comments, your broker should take care of all this for you. For example, each year I download my transactions from Schwab, then upload into TurboTax. (Actually, I think last year I didn’t even have to do the download/upload thing. I just imported directly into TurboTax.) Took just a few minutes. TurboTax does all the calculations.

This should never to a reason to not reinvest dividends. If your broker can’t do this for you, then get a new broker.

One reason people avoid reinvesting dividends is that (unless the stock is in an IRA) it is a tax and accounting nightmare. If you own a stock for 10 years and reinvest dividends every quarter, calculating your cost basis for when you eventually come to sell will be rather tedious (even assuming you’ve kept good enough records).