Sure, I’m biased toward US stocks—after all, I’m based in North Carolina and am most familiar with US reporting standards.

That doesn’t keep me from looking around the globe for unique opportunities, though. In fact, my hunt for value has led me to the UK, where stocks are on sale.

To get a proper read on how UK stocks are performing, you need to look at the MSCI United Kingdom Index.


This market cap-weighted index of 82 companies is listed in the United Kingdom and covers 85% of the UK stock market. You can play it in the US through the iShares MSCI United Kingdom ETF (EWU). 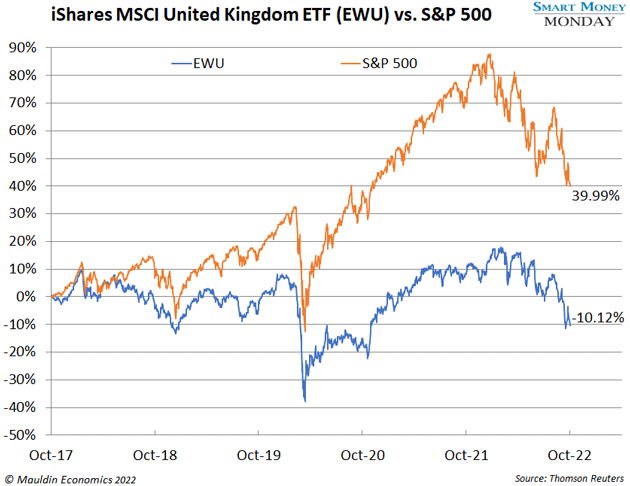 In short: 5 years of poor performance have dragged valuations in the UK down to near-record levels...

According to Yardeni Research, the UK stock market trades for just 9 times earnings. That valuation is in line with 2008 and 2011 levels, both crisis-era periods. In 2008, it was the global financial crisis. And in 2011, the European debt crisis.

Compared to other developed economies, the UK is the cheapest on a relative basis. The US MSCI Index trades for 16.5 times forward earnings. Japan: 12.1 times earnings. And the European Union: 10.7 times earnings. 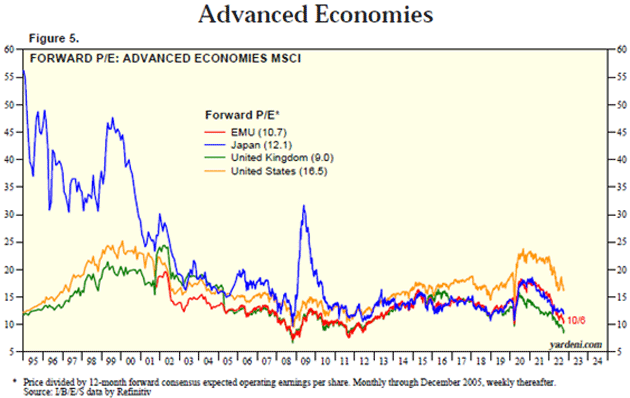 But as you may know, I don’t typically recommend buying an index. I like to own individual names.

One of the larger companies in the UK, parts of which have been around for 200+ years, is Reckitt Benckiser Group plc (RBGLY). I like to think of it as the Procter & Gamble (PG) of the UK.

Based on 2023 analyst expectations, PG currently trades for 21 times forward earnings. RBGLY, on the other hand, trades at just 16 times 2023 earnings estimates.

In 2017, RBGLY completed a transformational $16.6 billion acquisition of infant formula company Mead Johnson. It borrowed to complete the deal, which left some investors unhappy.

But that was Reckitt then. Today, Reckitt is on a much better footing…

For one, it has paid down debt and is moving toward profitable growth. Plus, Reckitt isn’t just exposed to the UK. Its revenue is evenly split between North American, European and developing markets. It’s a far-reaching company with a globally diversified business model.

That said, I’m not quite ready to pull the trigger on Reckitt. It had a recent unexpected CEO change, where former CEO Laxman Narasimhan left the company to head up Starbucks (one of my Smart Money Monday recommendations).

So, until Reckitt has some clarity on the future leadership of the company, I’m waiting on the sidelines. But it remains one of my favorite ideas to track in the UK. It’s on my watchlist, so stay tuned for a potential action to take.

A few of you wrote in about my call to buy Twitter (TWTR). The idea was straightforward: Elon Musk would be forced to complete the acquisition of Twitter at $54.20 per share.

The Wall Street Journal reported earlier this month that Elon Musk and his attorneys have informed Twitter that he intends to close the transaction at $54.20 per share.

Also, a shout-out to Smart Money Monday reader Marios, who wrote in saying, “In markets like this digging out opportunities like this is legendary.” I’m not sure about legendary, but I’ll take it. Thanks, Marios!

I’m curious: Did anyone else capitalize on this idea? If so, let me know how you fared. You can always write in at subscribers@mauldineconomics.com. I’d love to hear from you.