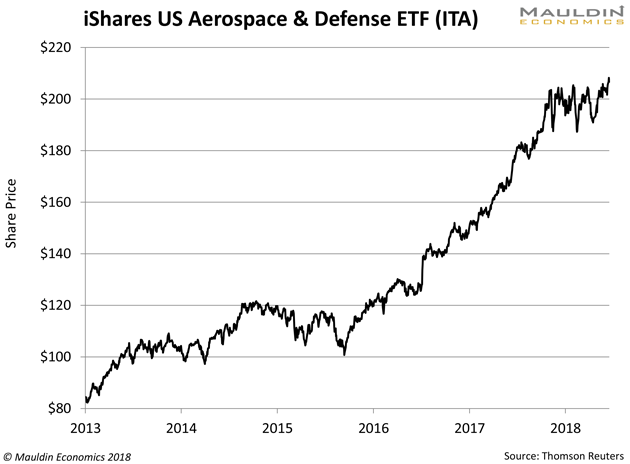 But this isn’t a one-off. iShares US Aerospace & Defense ETF has delivered a return of 56.1% over the last two years. That’s nearly double the 30% S&P 500 return over the same period.

I like defense stocks for several reasons. But above all else, the defense industry has one key advantage over all other sectors: its main customer is the US military.

The Industry that Never Quits

The US military is an awesome force.

It employs 2.2 million people. That’s more than the population of Wyoming, Vermont, and Alaska… combined.

To maintain this military force requires a lot of money.

The US spends so much on its military that the combined military budgets of China, Russia, Saudi Arabia, and India don’t equal even half the annual US defense budget.

The US spends 90% of its military budget on American companies. That means billions of dollars flow into US publicly traded defense companies.

But that’s not the only incredible thing about US military spending.

The chart below shows US defense spending with recessions highlighted in gray.

That’s very rare for any industry, and shows us that military spending is very stable.

During recessions, consumers spend less and businesses cut back investment.

That’s exactly what happened during the Global Financial Crisis. Between 2008 and 2009, US consumer spending fell 8.2% and domestic investment plunged 30.1%.

Yet, during this same period, the US hiked military spending by 12.2%.

This steady and reliable spending makes defense company profits very stable. It’s a major reason why the iShares US Aerospace & Defense ETF has crushed the S&P 500 during this bull market.

A Stock for Every Season

That’s why the defense industry is one of my top investments right now. While the entire industry is in good shape, the biggest profits are made by finding companies with the best outlook and business model.

That’s where I come in. In my premium investment service In the Money, I look for companies that have rock solid business models trading at cheap valuations.

There are a few companies in the defense industry I’m buying right now.

But one stands above the rest.

Investing Behind the Sea Wall

Shipbuilding is my favorite segment of the defense sector.

The thing is, the US has by far the largest and most dominant navy in world history. This enables the US to control both the Pacific and Atlantic trade routes. That’s a capability that Washington won’t soon give up.

To maintain this influence, the US invests heavily in its naval clout. Under the current US budget, Navy spending will rise 2.0% per year through 2022. That’s compared to the Air Force budget, which will decline 1.2% over that same period.

This stable outlook is good news for investors in shipbuilders. Since the government releases expenditures that look ahead five years, investors have a clear view of where its priorities lie. And if you follow the money, it looks like the Navy will be a big winner.

That’s why I’m having my subscribers buy a key US Navy shipbuilder.

This company has been the nation’s largest military shipbuilder for over 100 years. It accounts for half of the US market for advanced tactical warships. It is also the only company that builds and refuels nuclear-powered aircraft carriers for the US Navy.

Even better is that this company has built over 70% of the US Navy’s active fleet. That means this company is best equipped to repair and service these massive warships.

Bringing It All Back Home

This company was mentioned several times in the federal budget passed in January. In fact, the government granted this company $20 billion in new contracts.

I would love to reveal this company’s ticker today. But that wouldn’t be fair to In the Money subscribers.

If you want to try out In the Money risk-free for 30 days, click here.