You probably don’t like how your portfolio has looked over the last couple of weeks. You can thank the US dollar for that. Since April, the dollar has leapt 10% higher and wreaked havoc on stock markets around the world.

A surging dollar is one of the most disruptive things to global markets. The dollar is the world’s “reserve” currency and greases the wheels of global finance. An ample supply of dollars with a steady value tends to keep markets calm and happy.

But when the dollar jumps higher… look out. It becomes a wrecking ball that can smash stocks, especially emerging market stocks.

The Song Remains the Same

We saw a similar US dollar rally in 2014. And emerging markets were crushed when it happened, as you can see in this chart. 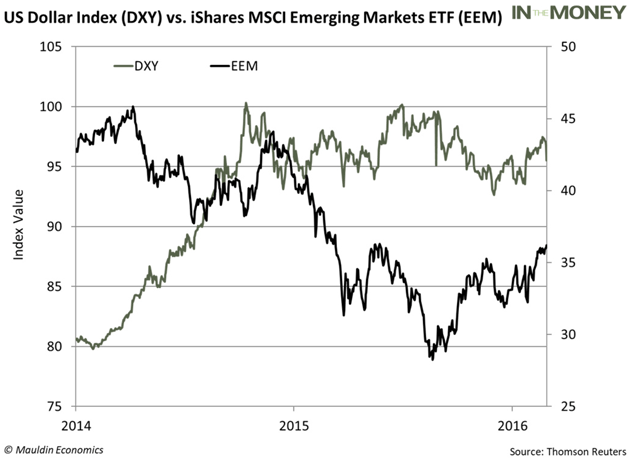 The US Dollar Index jumped 25% between July 2014 and January 2016. That caused the iShares MSCI Emerging Markets ETF (EEM) to plunge 37% over the same period.

The reason is that emerging market companies borrow money in US dollars. When the value of the US dollar rises, it takes more local currency to pay back the loans.

The US dollar is going to remain strong for the foreseeable future. My research shows that the average US dollar rally lasts 30 months. Since we’re only in the sixth month of the current rally, this is only the beginning. This means emerging markets are going to continue to struggle.

So, where can investors hide?

Many investors try to hide out in US stocks when the dollar rallies. They have the right idea, but it’s only half right. That’s because most US companies earn a large share of sales from outside the US.

The Downside of Globalization

Yet, according to S&P Dow Jones Indices, 44% of the revenue for S&P 500 companies comes from outside the US.

In fact, the Asia-Pacific and European regions account for 11% and 10%, respectively, of S&P 500 revenues.

These numbers shoot much higher for specific industries. Thomson Reuters shows that roughly 60% of S&P 500’s technology company revenue is from overseas.

I always aim to recommend safe, low-risk stocks. I do all I can to reduce risk. At this point, I don’t think we can call any US company that earns more than 30% of its sales from overseas “safe.”

The strong dollar will continue to hurt US exports. For now, owning companies with a lot of overseas business is too risky.

But with the stock market at all-time highs and grinding sideways, there are only a few industries I find attractive.

One that fits the bill is the recession-resistant pharmaceutical industry.

Rising pharmaceutical spending is one of the safest bets in investing.

It’s all linked to demographics. Every day in the US, 10,000 baby boomers retire. As they age, they will spend more on health care.

The Centers for Medicare and Medicaid Services (CMMS) expects healthcare spending to rise 5.8% per year over the next 10 years. That is well above the 4.2% average annual rate seen in 2008–2016.

And aging boomers are not the sole source of ballooning healthcare spending. More and more people are getting health insurance.

Just 27 million Americans lack health insurance today, down from 45.6 million in 2012. Despite its warts, the Affordable Care Act (ACA) drove the number of Americans without health insurance from 14.8% of the population to 8.6% in only six years.

I expect the US healthcare system and the ACA will see huge reforms over the next decade. But the goal will be to add more people to health insurance plans.

As more people are insured, they will use more medicines and medical supplies. And the companies that help meet this demand will be big winners.

The company that I recommended to subscribers of my premium investment service Yield Shark is perfect for the US dollar breakout.

It’s one of the nation’s largest pharmaceutical and medical distribution companies.

The best part is the company gets 98% of its sales from inside the US. It’s minimally exposed to foreign currency issues.  Nearly all its customers are based in the US.

Even better is that this company and its two peers control 90% of distributed drugs in the US.

They’re known as the “Big Three.” And they all have economic moats. That means that their businesses are designed to keep rivals at bay.

Think of it as a literal moat around the company’s business.

I’d love to give you the ticker of this company today. But that wouldn’t be fair to my paid Yield Shark subscribers.

To get in on this play, click here to try Yield Shark risk free.