The index has since rebounded 6.9%.

This is being cheered as a sign that the stock market correction is over.

This is wishful thinking.

The main worry behind the big market sell-off was higher interest rates.

But higher rates have only just started to have an effect on the economy.

This Is Only the Beginning…

This has more than doubled the yield on the 10-year Treasury bond.

The central bank has signaled it will hike two more times this year. 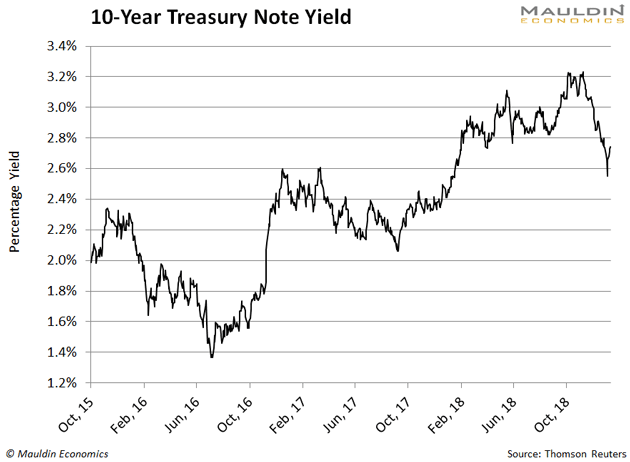 That tells me there is more danger ahead for stock investors.

When interest rates are low, it’s easier and cheaper for businesses to borrow money.

But when rates climb higher, the opposite is true. It costs more to a run a company.

This will lower a company’s earnings and drag down its stock price.

Rising interest rates are not kind to stocks. That’s a fact.

And businesses that are highly dependent on cheap credit will be even worse off.

In my experience, there are two types of stocks that pay a dividend:

In my premium investing service Yield Shark, I exclusively focus on #1. I find companies that will do well no matter what’s happening in the economy. Those are the only kind I recommend to my subscribers.

One company that fits in this basket is Coca-Cola Co. (KO).

Coca-Cola Is a Classic All-Weather Stock…

Heck, Coca-Cola has enough cash in the bank to fund its business for two years.

And it can do so without any additional revenue.

No matter what’s going on with interest rates, Coca-Cola can run its business.

As the chart shows, shares of KO have actually gained 3.9%: 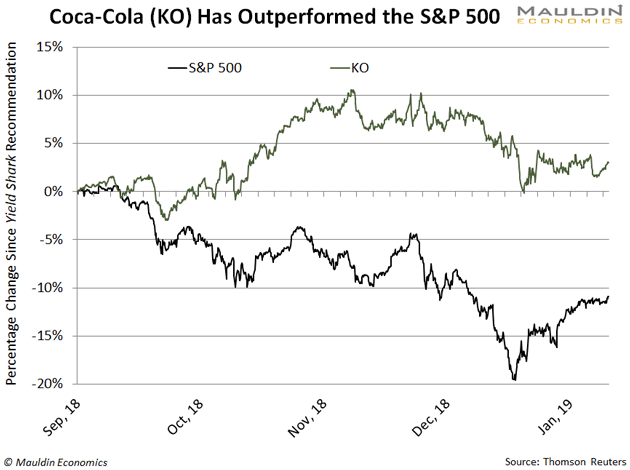 Coca-Cola is immune to rising rates, and the strength of its shares during a market meltdown proves it.

On the other hand, there are certain types of companies that aren’t so lucky.

Caught in the Rising Rates Crossfire…

If rising rates are bad for most industries, then they're really bad for industries that rely on borrowed money.

These include utilities, pipeline master limited partnerships, and perhaps most of all, Real Estate Investment Trusts (REITs).

REITs are known for paying generous dividends. Many of them offer yields of 6% or more.

That looks very tempting. But owning a REIT can be dangerous when rates are rising.

The thing is, they won't be able to pay those tempting dividends much longer.

REITs Have a Target on Their Backs…

These properties range from everything to apartment buildings, hospitals, shopping centers, and hotels.

An REIT grows its business by borrowing money and buying more property.

When interest rates are low, an REIT’s finance costs are lower, its profits are higher, and that enables it to pay a fat dividend.

From January 2009 to December 2015, interest rates were at their lowest levels ever.

But times have changed.

And just like that, REITs have lagged the S&P 500: 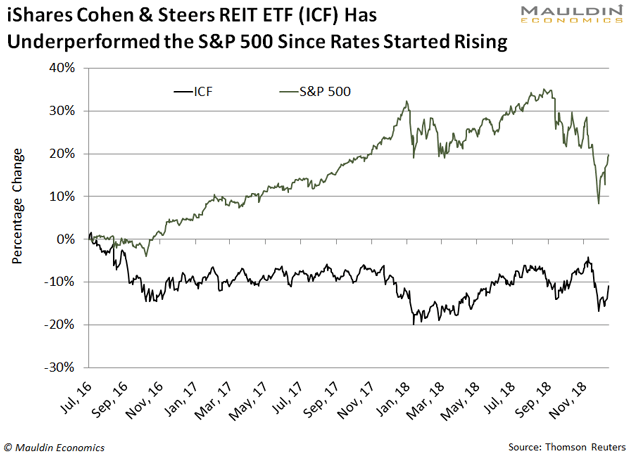 Meanwhile, the iShares Cohen and Steers REIT ETF has lost 11.4%.

I expect REITs will continue to perform poorly in today’s already rocky market.

Robert,
Just wondering- does the chart above comparing the S&P 500 to the ICF include the impact of dividends?
Thanks,
jeff harbaugh