It was the night of December 26. Earlier that day, the Dow Jones Industrial Average had surged over 1000 points.

Some people saw this as a sign that investor confidence had returned.

But big surges like this are common during bear markets.

In fact, they happen more in bear markets than bull markets.

Market Surges Can Be Deceiving…

Here’s the trick to judging market swings: never measure the market’s gain or loss in terms of points.

You should always look at the size of the move as a percentage.

The largest stock market move in history—Black Monday, October 19, 1987—was only a 500-point drop. That is half of the December 26 move when measured in points. But it was a crushing 22% loss in a single day.

The December 26 move might have been 1,086 points, but it was only 5%. And percentage moves like that are not uncommon. In fact, the 5% move doesn’t even crack the top 20 percentage gains since 1900.

When you look at the largest percentage gains, you’ll see a pattern: 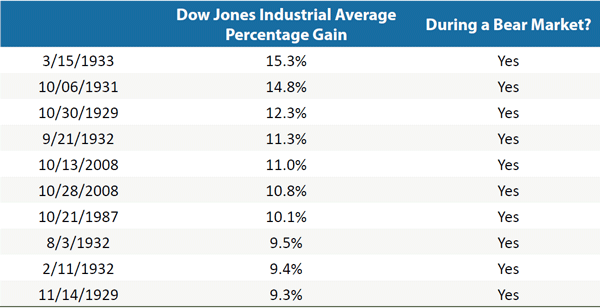 The record shows that we see bigger single-day gains in the stock market during blistering bear markets.

Greater Volatility in a Bear Market…

Don’t get too excited, though, because this pattern cuts the other way.

Take a look at this table: 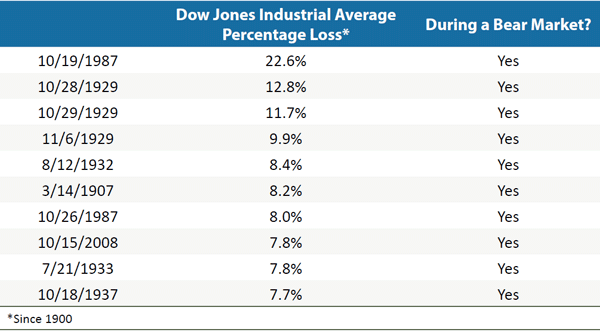 Again, history shows us that the largest one-day market declines are much more common during bear markets.

So, investors should expect higher stock market volatility—both to the upside and downside—during a bear market.

This fact has major implications for your portfolio.

Make Sure You’re Selling the Rallies…

It stands for buy the dip.

It means that when the stock market falls (or “dips”) investors should take advantage of the cheaper prices and buy.

There were thousands of people using this hashtag during the 15% sell-off that preceded the December 26 stock market bounce.

But there’s another, less-common hashtag: #STR

This stands for sell the rally.

This means that when the stock market jumps higher—like it did on December 26—investors should use it as a chance to sell their risky stocks and buy safe assets.

That’s where I come in. I’m always on the lookout for safe assets for my readers.

Way ahead of the big December sell-off, I had my readers do just that in my premium investing service, Yield Shark.

Some of Us Saw This Coming…

In my October 23 issue of Yield Shark I wrote:

“20 years of data are screaming that the likelihood of a pullback in stocks is high and may be imminent.”

Here’s what happened over the next two months: 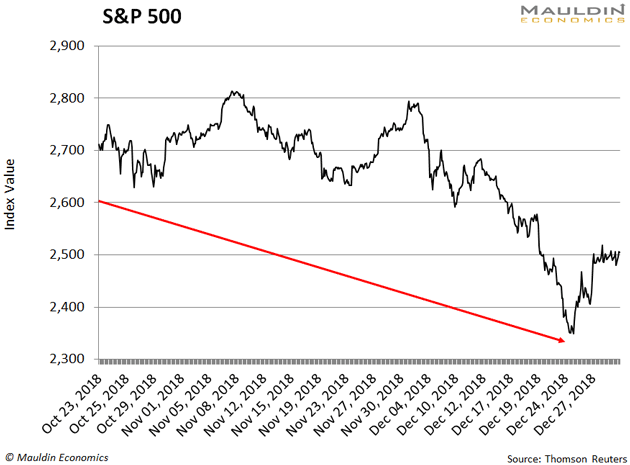 The market’s rebound of the past two weeks has many analysts thinking that the correction is over.

Not me. I’m convinced this is only the beginning.

This Is the Start of Something Big...

Big one-day market spikes are nothing to cheer. And they don’t mean the downtrend is over.

On the contrary, it tells us to prepare for more market gyrations, and that the market could head even lower.

That’s why I’ve had my readers buying ultra-safe stocks that are uncorrelated to the market.

This strategy has been working.

My recommendation from the October 23 issue is up 14% while most other stocks got hammered lower.

Gold Is a Time-Tested Hedge Against Market Turmoil…

The company is the gold and silver streaming company Wheaton Precious Metals (WPM).

Gold streaming companies are unique players in the gold market.

Here’s how the streaming business works. WPM provides cash up front to mining companies to help them run and expand their operations. It becomes something like a silent partner. In return for the investment, it receives the right to buy gold and silver from the miners’ future production at an agreed price.

You don’t want to own the market right now. You want to own individual, safe stocks that will hold up in stormy markets.

Gold streamers have shown that they do great when stock markets turn volatile. Because of that, investors flock to gold and gold companies when the outlook for financial markets turns cloudy.

But this isn’t the only asset we’re buying in Yield Shark. I have seven stocks in the portfolio that have done way better than the S&P 500 during the latest bear market.

If you want to try out Yield Shark risk-free, click here.

The Great Depression was a unique historical event that is already almost 90 years in the past. Its relevance to today’s investing climate is pretty slim. Why don’t you show the same charts for post-1945 stock market rallies and crashes? Seven out of ten of your data points are from the era before 1940 - such an analysis would barely get a passing grade in any college finance class. It’s a fact in many fields that deviations from the norm get smaller with time (e.g., baseball, with the last full season .400 hitter already almost 80 years ago). With data just from the past 70 years, your conclusions might be the same, but the believability of your analysis would be much better.