I just cut short a trip to South America.

Now that I’m back in California, I see empty shelves and people with different interpretations of social distancing and “shelter-in-place” orders.

With weeks (or even months) of lockdowns looming, people aren’t taking any chances. They are stocking up on paper goods, non-perishable foods, and water.

Did I say stocking up? I mean panic-buying!

We haven’t seen sales figures from the recent run on bottled water, but we can expect it will be big.

But do you know who was already spending a whole lot of money on water, and not just of the drinking variety? The government!

With the average American using 80 to 100 gallons of water per day, we need every last drop we can find.

The US government knows this. That’s why they’re investing heavily in water infrastructure. It’s also why… 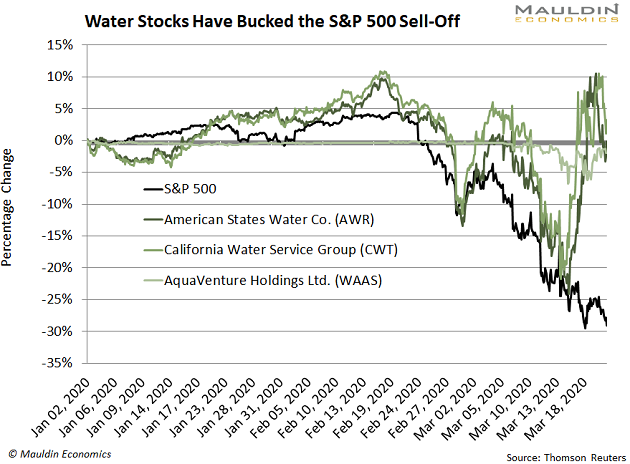 That’s right, these water stocks have fallen a fraction of the broader market.

And there’s good reason for that.

These steady and predictable investments help make US water stocks some of the safest investments on the market.

But we won’t have to wait that long to see the next waves of water-based profits.

It’s a given that water is essential to life. That makes water infrastructure indispensable.

In step, it also means the companies that operate this infrastructure are also very stable.

When times are tough, investors pile into water stocks. As I showed you earlier, water stocks have held up nicely during this sell-off. But it isn’t the first time water stocks bucked a market sell-off.

Water Stocks Held Up During the 2018 Sell-Off

I sure do. While it wasn’t as severe as the current sell-off, it gave us a glimpse as to which stocks would outperform in the next sell-off.

And water stocks performed then as well.

While the S&P 500 was in freefall, investors piled into water utilities: 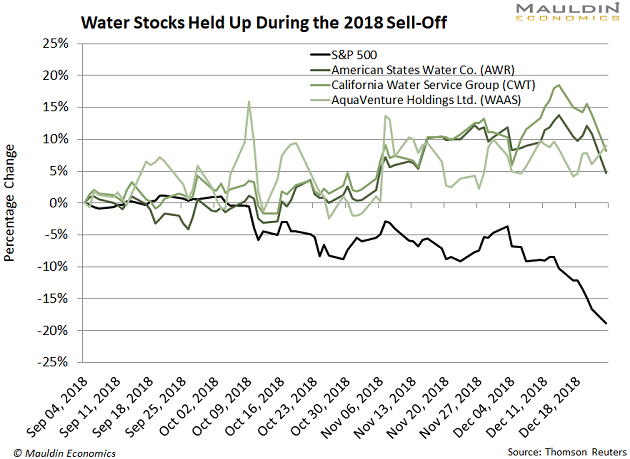 Investors sought the safety of water utilities when the stock market was spiraling.

Stocks are currently going through a rough period. But that means it’s the perfect time to add water utilities to your portfolio.

My top water utility stock is American States Water Co. (AWR). The company is one of the largest water utilities in California.

Because of constant demand from California’s growing population, AWR stock is incredibly stable. During the 2018 sell-off when the S&P 500 fell 19%, AWR stock actually rose 4.7%.

Next on my list is California Water Service Group (CWT). Just like AWR, this company is a large California water utility.

And during the last two sell-offs, it held up even better than its in-state rival. For instance, back in 2018 when the S&P 500 was in freefall, CWT was surging. In fact, shares rose 8.2% during the sell-off.

It’s been the same story this time around. While the S&P 500 has shed nearly one-third of its value, CWT is down a mere 2%.

Finally, we have AquaVenture Holdings Ltd. (WAAS). The company operates water purification and desalination plants all over the world.

Just like my other two water picks, WAAS has performed admirably during the last two sell-offs.

Want some more stocks that hold up during a market crash?

Check out my YouTube channel, where I’ll be posting a video tomorrow with even more crisis investing ideas.

You missed Duxton water!!! 6% yield trading at a discount of roughly half of net assets…

Unfortunately Aquaventure Holdings has been bought by Culligan which is a private company for 27.10$ so any investment in that one is futile unless you are in buying into takeover announcement strategies, ie collecting the 0.5$ spread between current market price and execution price.
Arne