We got some bad news about Social Security last week.

A new report says the program will cost more than it takes in by 2020. By 2035, its back-up trust fund will also run dry.

This makes sense: America is greying.

We’re having fewer children, living longer, and wages are growing at a slower pace.

That means there are fewer workers, those workers are making less money, and they’re supporting more retirees.

When Social Security was introduced in 1935, there were 42 workers for every retiree. Today, there are only 2.9. And that number is set to drop to 1 within the next decade, according to the latest report.

This means the government will have no choice but to cut Social Security benefits. If you’re under the age of 65, you should expect to collect less than previous generations. At this point, that’s pretty much a given.

There is, however, a far more stable government-backed system that can boost your retirement plans.

I’m talking about the global defense industry. And today, I’ll show you how to tap into it.

Profiting Off the World’s Largest Employer

The US military is a behemoth. It employs 2.2 million active military personnel.

The US Department of Defense, which manages the military, is the largest employer on the planet. Its workforce equals the entire population of Nevada in size.

No surprise, it takes a ton of cash to keep this machine running.

The US military budget is nearly $700 billion this year alone. That’s more than twice the military budgets of China, Russia, Saudi Arabia, and India combined.

But here’s the kicker: The US spends 90% of its military budget on US companies. That means billions of dollars flow into publicly traded US companies every year.

And it happens no matter what…

When the economy slows—as I expect it to in the next 18 months or so—people spend less and businesses scale back.

Consider the global financial crisis, for example. Between 2008 and 2009, US consumer spending fell 8.2% and domestic investment plunged 30.1%.

This was not an anomaly. Defense spending grew during five of the six last recessions.

You can see this in the next chart, which tracks US defense spending since the 1970s (recessions are highlighted in grey). 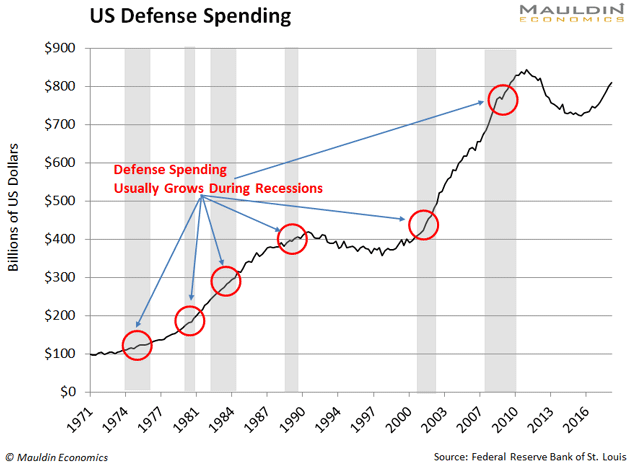 A solid 70% of the US economy relies on consumer spending. That means everything from people buying groceries to paying their energy bills. During a recession, consumers feel the pinch and spend less.

The defense industry, however, is immune to this.

There’s no shortage of reasons to spend money on the military. From countering threats abroad (both real and imagined), to supporting veterans and defense-linked jobs, it’s politically toxic to cut military spending. No one wants to touch that hot potato.

Regular readers know that dividend-paying stocks are my specialty. These are often the stocks of boring yet stable businesses. Stability is why they can pay dividends every quarter.

And, while the defense industry is certainly stable, it’s not known for its dividends.

Consider the iShares US Aerospace & Defense ETF (ITA), for instance. The ETF holds a basket of large defense stocks. But it only pays a 1.0% dividend yield. That’s only half of the 1.9% dividend yield on the S&P 500.

Nevertheless, there are individual defense stocks that pay great dividends. But you have to dig.

Let’s take a look at some of the best options.

Of these, Lockheed Martin Corp. (LMT), which makes a wide range of aircraft, naval ships, missile systems, and other defense-related gismos, enjoys the most stability from government spending.

The company is basically an unofficial wing of the US military. It also has the second-highest dividend yield on the list.

BAE Systems plc (BAESY), a UK-based defense and aerospace company, relies a bit less on US government spending. But its dividend yield is almost twice as high as Lockheed Martin’s.

If you’re looking for reliable income from the defense sector, I think buying individual companies is the way to go.

If and when Social Security dries up, you’ll be glad you’re collecting safe and reliable dividend payments from the recession-proof defense industry.

How much money do I have to invest in these, company to acquire a lot of money.

THANK YOU FOR THE GREAT IDEA… I KNOW WHERE MY INVESTMENTS WILL START TO GO NOW….

THANK YOU FOR THE BAD & THEN THE GOOD NEWS…
I HAVE HEARD IT ON LINE SO MANY TIMES, SOCIAL SECURITY IS PROBABLY GOING TO BE OUT OF MONEY IN A FEW YEARS… I AM NOW RETIRED & AM 75 YRS.“YOUNG” I THINK THAT YOUR IDEA OF BUYING STOCKS FROM COMPANIES THAT MANUFACTURE DEFENSE PRODUCTS AND USUALLY SEND OUT QUARTERLY DIVIDENDS IS A VERY STRONG WAY TO BE SURE THAT YOU WILL NOT FALL BEHIND IN INCOME & STILL GET THE CONFIRMATION THAT THOSE WHO WORK IN THOSE COMPANIES & THEIR MANAGEMENT PEOPLE ARE “THE TRUE STOCK MARKET WINNERS”...
I KNOW WHERE I WILL BE INVESTING IN THE FUTURE….THANK YOU FOR MAKING SO MUCH SENSE. RESPECTFULLY,
MARTY G.

Hi there!!!
I am now 75 yrs young…. totally retired ( due to bad heart condition…. so I guess if Social security is going to get worse..maybe it is the time to help me fix my income from social security…I must follow up on what you wrote on page one….

THANKS FOR THE GREAT IDEA.

This email that I received today will continue to be in my prayers each and every day…..as long as the LORD WANTS ME HERE ON WITH THE OTHER MEMBERS OF THIS COMMUNITY
GOD BLESS THE USA.
RESPECTFULLY,
MARTIN L. Goldmark

Back in the mid 1980’s I was a Steel Laboratory Supervisor once again facing a lay off in the steel industry. So I thought that I would get a job with one of the US Govt. national labs- they aren’t going to stop making Nuclear weapons was my thinking… INF treaty in 1987 pretty much put the kaibosh on new development of nuclear war heads for short and long range systems… Otherwise, thoughtful analysis. There’s always something!