Even the best investors have bad days.

Warren Buffett is no exception. In February, the famed investor watched one of his biggest acquisitions quickly sour.

I’m talking about Kraft Heinz, the American food giant that makes everything from ketchup to Oscar Mayer hot dogs to Kool-Aid. 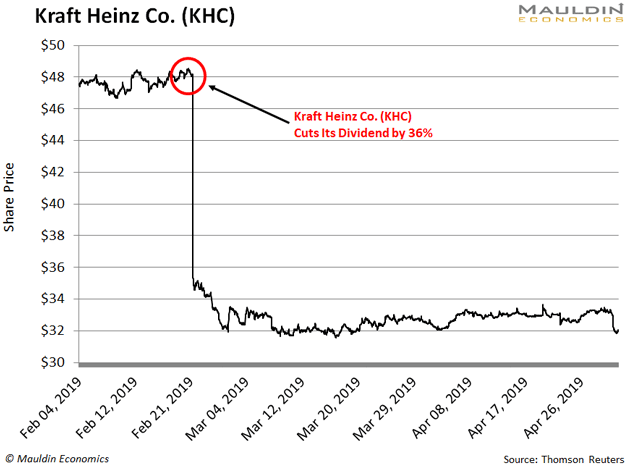 The company’s shares plummeted 30% in one day after it announced a 36% dividend cut.

This surprised a lot of people in the investment community. That’s because Kraft Heinz fit Buffett’s signature strategy, known as value investing, to a T.

Buffett has used this strategy to make billions upon billions of dollars. So people expect it to work.

Nevertheless, I think the writing was on the wall well before February. I’ll explain why—and how to avoid stocks with similar problems—in a moment.

But first, let’s look at how Buffett got into this jam…

There’s Always Money for a Coke

Value investors make money buying stocks they think are trading for less than their intrinsic value.

Imagine, for example, that a stock is trading for $20 per share. But your research says its intrinsic value is $25 per share. If you’re correct, and the share price rises, you can book a profit.

That’s how value investing works, in a nutshell. This strategy is one of the reasons Buffett acquired an 27% stake in Kraft Heinz in 2015.

It also matched his preference for easy-to-understand companies like Coca-Cola and Duracell. In theory, people buy their products no matter what’s happening in the economy.

There’s always money for a Coke, a pack of batteries, or a hot dog, even when you’re broke.

No One Drinks Kool-Aid Anymore

On the surface, Kraft Heinz looked like a stable company with a safe dividend. Then it started to show its wrinkles…

The biggest issue is that Kraft Heinz has been struggling to keep up with changing consumer trends.

This has weakened demand for the company’s core products. (When was the last time you saw someone drinking Kool-Aid?)

In fact, the company’s sales flatlined from 2015 to 2018. Earnings rose slightly, but this came from cutting costs, not growing sales. Nevertheless, Kraft Heinz kept raising its dividend.

This was a major red flag.

How to Spot an At-Risk Dividend

When a company’s dividend rises faster than its earnings, it increases a closely watched indicator called the payout ratio.

The payout ratio is the percentage of net income a company pays to shareholders as dividends. The lower the payout ratio, the safer the dividend payment.

In Kraft Heinz’s case, the payout ratio has been rising for three years. Over that period, it has averaged 94%. That means the company immediately paid out almost every dollar it made.

Again, this is a major red flag. If a company pays out all of its profits in dividends, there’s nothing left over to reinvest in the business.

With Kraft Heinz, sales were already struggling. Add in the rising payout ratio, and more investors should have been wary.

Instead, they were hypnotized by Buffett’s blessing and the company’s (former) 5.5% dividend yield.

Then the chickens came home to roost. February’s big dividend cut sent shares down 30% in one day… and cost Buffett’s Berkshire Hathaway a paper loss of over $4.3 billion.

A Better Route to Safe Dividends

Of course, I understand why Kraft Heinz seduced so many income investors. For years, it was considered a safe, high-dividend investment.

But those of you who subscribe to my premium investing service Yield Shark knew better.

All Yield Shark recommendations have to pass my Dividend Sustainability Index (DSI). In addition to a company’s debt and free cash flow, the DSI looks closely at a company’s payout ratio.

While Kraft Heinz’s 5.5% dividend looked tempting, it failed the DSI. Anyone who reads Yield Shark would have immediately looked at Kraft Heinz’s payout ratio and known it wasn’t safe.

Even so, it’s much easier to pass over iffy investments when you know where to find better, safer options.

Right now, the Yield Shark portfolio has five companies yielding as much or more than Kraft Heinz. And I’m confident they won’t be cutting their dividends anytime soon.

You can take a risk-free look by clicking here.

Like Buffet, I lost 1/2 of value in February. That stock was recommended by a major asset management firm, which I’ll never trust again.