Unemployment is the lowest it’s been in 50 years.

That means most people who want to work can find a job. It also means people are making more money and buying more stuff.

All good. More people working is always positive. But a low unemployment rate is a double-edged sword.

See, the unemployment rate is cyclical. It’s always moving up or down. And at this point—3.6%—there’s almost no room for it to drop more.

That’s where the trouble starts: When the unemployment rate bottoms out, like it’s doing now, it means the economy has peaked… and a recession is probably coming.

The Job Market Could Already Be Suffering

As you may know, the unemployment rate points to the percentage of people willing and able to work who can’t find a job.

However, it’s a lagging indicator. That means it rises and falls after major shifts in the economy, not before.

That makes sense when you think about it. For one thing, the unemployment rate is updated once a month. It doesn’t happen in real time.

Then there’s the practical aspect of letting employees go. Businesses are made up of people. And people don’t often lay off employees the first day business starts to slow. There’s a lag.

In other words, even though the unemployment rate is at a 50-year low, the actual job market may actually be much worse. The numbers just don’t show it yet.

In any case, we know what’s coming next…

We’ve Been Here Before

When the unemployment rate bottoms, it’s a telltale sign that a recession is coming.

You can see this in the next chart. Notice that every time the unemployment rate hits a low, a recession (highlighted in gray) soon follows.

It doesn’t come immediately, though.

Over the past 70 years, a recession has started an average of five months after the unemployment rate bottomed. 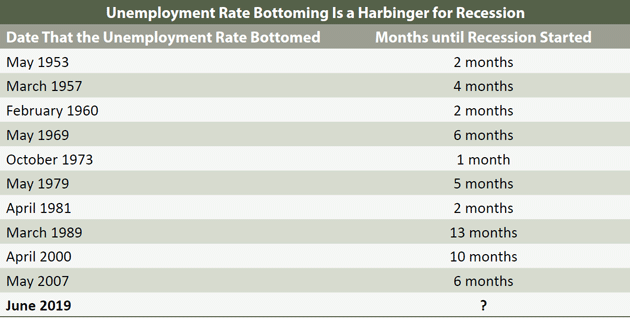 Also, remember that the unemployment rate lags behind the actual economy. So it won’t start rising until the US has already fallen into a recession—something I’ve been telling readers to expect in the months ahead.

A bottoming unemployment rate isn’t the only sign that the economy has peaked.

For weeks, I’ve been telling you that the yield curve inversion—also known as the Diamond Cross—is signaling a recession ahead.

Like the unemployment rate bottoming, the Diamond Cross has preceded every single recession over the past 50 years.

Keep in mind, neither of these indicators means a recession is imminent. And they don’t tell us how severe the recession will be. But it’s certainly coming.

So is the market downturn.

Remember, we’re at the tail-end of the longest bull market in history. So a major pullback is not out of the question. And, since stocks fall an average of 32% in a bear market, you want to start preparing your portfolio now.

That means adding recession-proof stocks and other assets that will rise when the broader stock market falls.

This Is How You Prepare for a Recession

I think dividend-paying stocks—especially in sectors like consumer staples, utilities, and defense—are some of the best ways to buoy your portfolio as we head into this recession.

Consumer staples are a great refuge when the economy hits the skids. These businesses sell things like toilet paper, laundry detergent, and dog food—things people buy no matter what’s happening in the economy.

Right now, my favorite way to invest in consumer staples is the Vanguard Consumer Staples ETF (VDC). It pays a safe and stable 2.7% dividend yield.

Utilities, of course, are about as recession-proof as it gets. People pay their power bills even when the economy tanks. So these businesses are very stable.

Then there’s the defense sector.

Regular readers know that US defense spending usually goes up during a recession. The iShares US Aerospace & Defense ETF (ITA), which pays a 1.1% dividend yield, is a good way to invest broadly in this sector.

Of course, this is just the tip of the iceberg…

There’s a lot more you can do to prepare. That’s why I’m hosting a free webinar next week… to show you how to recession-proof your income.

It’s called the Any-Weather Income Strategy Summit. And you can join me for free on Monday, June 24, at 2pm EST.

During this special event, you’ll get all the details on my favorite, high-yield, low-risk recession beating stock—including the ticker symbol.

You can reserve your spot now by clicking here.

Robert, we agree with your and John’s stance to be cautious and prepare ahead of time…like now! Howevrr, is this the time to move into an ETF? All are priced at a premium to NAV and at 52 week highs.
Suzy

Electric utilities are NOT recession proof. Businesses cut backs reduce demand for electricity.
Maybe more pronounced in future due to increase in tech.