But retirement won’t mean endless rounds of golf or trips to Tuscany for a lot of these folks, who are now 55–75 years old.

In fact, retirement will lower the living standards of 40% of boomers, according to The Wall Street Journal. That translates to a lifestyle downgrade for 15 million American households.

It gets worse: One in three boomers has zero money saved for retirement. Zilch. Nothing. And 6 in 10 have less than $10,000.

Then there’s the debt problem. The average boomer is $99,000 in debt, according to the Wharton School.

This is all pushing boomers to rethink their retirement plans. For many, that means trailer parks…

Still, I had to see for myself. So I drove up to Napa to see one of these communities.

After parking at the entrance, I walked over to a perfectly manicured mini-golf course. Behind me, kids splashed around in an Olympic-size swimming pool. About 100 yards away, a community library sat in the shade of giant palm trees.

This certainly wasn’t a “trailer park” in the traditional sense. It was downright pleasant. The allure started to make sense. 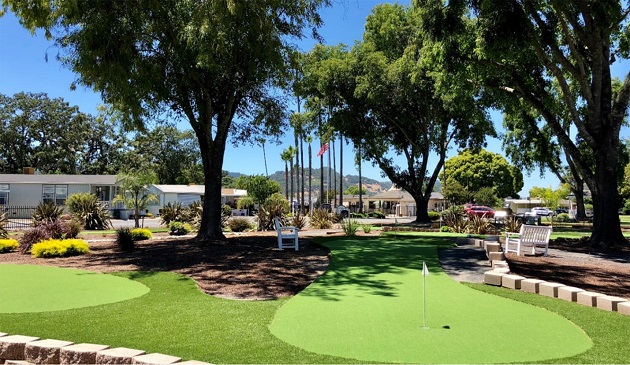 For one, manufactured homes cost nearly $300,000 less than traditional houses. For retirees worried their nest egg won’t last as long as they need, it can be the perfect fit.

John Mauldin calls this problem longevity risk. And it’s something many retirees are coming to terms with.

Most retirees simply can’t afford their dream beach house. Far from it. So they’re turning to plan B: manufactured home communities like the one I visited.

REITs own and operate real estate—everything from hospitals to warehouses to trailer parks. They trade just like stocks, but they’re required pay out 90% of their profits as dividends. So they’re great for income investors like us.

Last November, we talked about investing in two manufactured home REITs: Sun Communities (SUI) and Equity LifeStyle Properties (ELS). Since then, they’ve surged 53% and 42%, respectively. (The S&P 500 has risen 12.3% over the same period.) 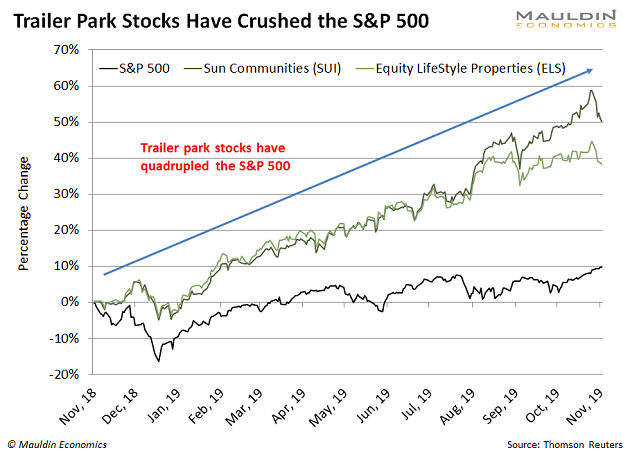 Sun Communities and Equity LifeStyle have more or less quadrupled the S&P 500 over the last 12 months. But I think these stocks are just getting started.

The Great Downsizing Is Coming

Remember, 10,000 boomers are retiring every day with nowhere near enough money. But there’s a solution: 60% of US households own a home.

"Trailer parks can be thought of as gated communities for people who aren't so wealthy,” says Becker.

In fact, manufactured homes have been the largest source of affordable housing in the US for 30 years.

Meanwhile, US home prices are at all-time highs: 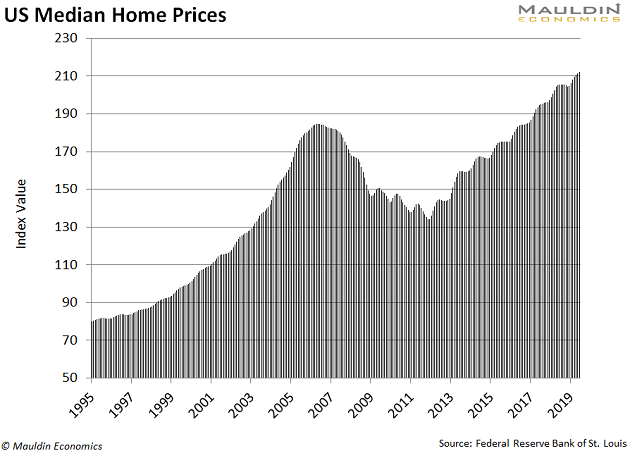 This trend is already in motion. Sales of manufactured homes are surging: 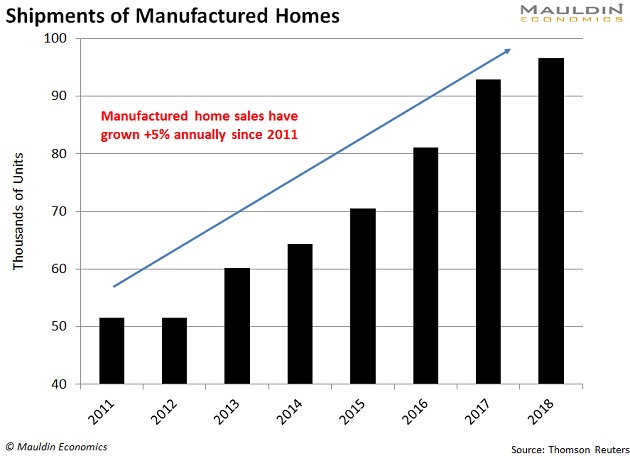 It’s no fluke that manufactured home sales started rising in 2011. That’s around the time boomers started to retire.

I’m not the only one connecting the dots here. Legendary investor Warren Buffett was an early mover in the manufactured homes space.

Buffett’s holding company, Berkshire Hathaway, bought Clayton Homes for $1.3 billion in 2003. Clayton is the largest builder of manufactured homes in the US.

One of the best parts about manufactured home stocks is they’re incredibly resilient—just like Walmart (WMT), which we talked about last week.

Sun Communities and Equity Lifestyle held up remarkably well during the freefall. Their respective stocks only dipped 2.7% and 1.5%. 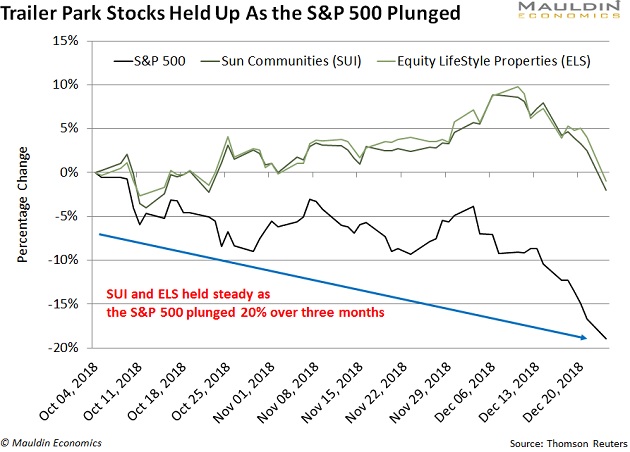 Retirees will continue downsizing into manufactured homes for at least the next decade. Meanwhile, manufactured home REITs pay fat dividends. And they’ve been rising over three-times faster than the S&P 500.

Ever better, they also hold their value during a downturn—making them a good fit for any income investor’s portfolio.

I own several rental manufactured homes in 55 and older parks here in Central Florida. I only buy where you own the lot, not a home on a rented lot.  The parks are super clean with pools, recreation facilities etc. Older Tenants don’t tear your place up, and get a really nice place to live for $795 month. I opened a self directed IRA and used that money to buy them. I’m getting a 12% return based on acquisition cost plus initial remodel to get the place to better than new condition..

When valuing a REIT, EPS is not a very good metric. A better one is FFO/share.

And if the selloff in stocks at the end of 2018 is any indicator, SUI is the perfect stock to buoy your portfolio.

How do you justify buying SUI at this time with EPS over 90 and the impending recession and I find dividends not particularly attractive at less than 2%.

Can a 401k be directed towards these stocks and still receive dividends?