One year ago, the US labor market was almost at equilibrium. April 2021 data showed 9.7 million workers looking for jobs and 9.3 million jobs available—a remarkably quick improvement from the initial COVID crash.

Many employers complained the government had caused a worker shortage by paying people not to work. Some states ended extra pandemic benefits early, and they expired nationwide in September 2021.

Yay, problem solved… except it wasn’t.

Roll forward to 2022. No one is getting extra-generous checks anymore, yet the economy has 5 million more open jobs than available workers.

So, it appears COVID benefits weren’t the main factor. Something else is happening. Something big, and many American businesses don’t know how to handle it. 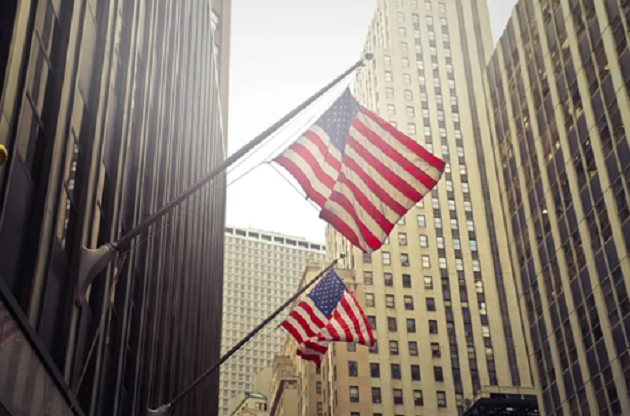 The narrative that emergency unemployment benefits were causing a labor shortage kind of made sense. Why work in a pandemic if you could stay home and make the same or even more money? It felt correct.

But feelings aren’t data. With that supposed cause now gone and the problem still getting worse, more must be happening. 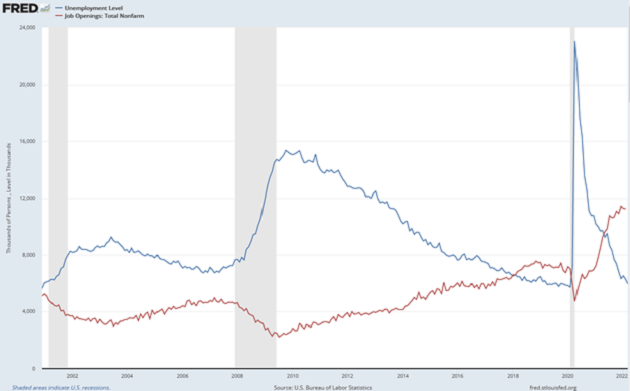 In 2018‒2019, the lines crossed. That meant employers had to compete for a limited number of workers. Many complained, correctly, they couldn’t find enough qualified applicants.

Then came COVID. Unemployment shot higher, then fell back over the next year. Meanwhile job openings rose after an initial drop. And in May 2021, the lines crossed again.

We can see this more clearly by expressing the same data as available workers per open job. When the ratio is greater than 1, the economy has more workers than jobs. Less than 1 means it has more open jobs than workers. 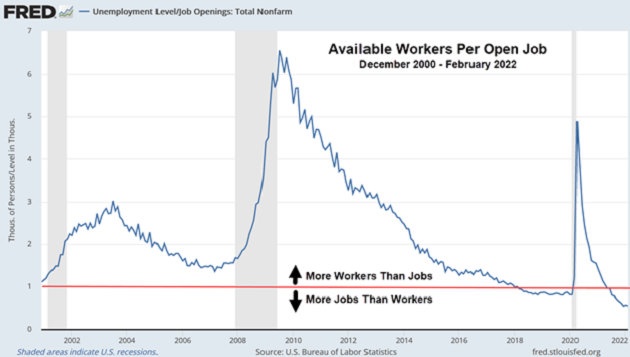 Looking at the lower right, you can see the balance is in workers’ favor and getting more so. If government benefits didn’t do this, what did?

Notice how the ratio peaked in 2010 as the Great Recession was winding down. But that’s also when the large Baby Boom generation started reaching retirement age... which I suspect is more important.

And on top of that, now COVID and geopolitical changes are making overseas production less feasible, limiting the ability to use foreign workers.

So, this “sudden” change has actually been developing for years.

Think of it like water temperature. At 33 degrees Fahrenheit, you have cold water. Drop just one more degree to 32 and you have something else.

An economy with fewer workers than job openings is radically different. Employers had a little taste of it in 2018‒2019. Now it’s back… and the ice is freezing harder.

Imagine you need a dozen apples. You go to the grocery store bin containing 200 apples. You sort through it, pick a dozen, and go home.

For employers, that’s kind of how hiring used to work. You advertise your job openings, get a bunch of applicants, and pick some. Not always easy or fair, but it was a standard process.

If we had data, I suspect we’d see an era of abundant labor began around 1980 as the youngest Boomers reached working age. It continued another 30‒40 years. Now it’s over.

This means generations of bosses face a kind of labor market they’ve never experienced. Some aren’t handling it well.

Last year, for example, workers at a Pennsylvania McDonald’s signed a petition asking for higher pay. They got this response:

“There are better ways to go about this,” the regional supervisor replied. She had been thinking about boosting pay at the Bradford McDonald’s, she said, but she was not going to give in to threats or give up control. Because of the petition, no one was getting a raise. If the workers did not like it, they could quit.

The workers did quit, and the McDonald’s franchisee ended up raising pay anyway after losing months of revenue. Management had much less “control” than it thought.

It’s not just low-wage service workers, either. Many large companies who allowed “work from home” (WFH) during COVID now want to bring staff back to the office. Some don’t want to return, at least all the time—not because they worry about COVID but because WFH offers advantages they enjoy.

Rather than adapt to this new reality, surveys say many employers are making threats:

Employers certainly have the right to do this. But in today’s labor market, competitors will probably offer what those workers want. “Back to your desk or else” orders can easily backfire.

Not Just a Phase

The more interesting part is what this says about executive mindsets. Many think the current labor shortage is just a phase, and they will regain their old power soon.

I’m not so sure of that. I think this is a long-term demographic change that will reorder the relationship between capital and labor.

Exactly how it will develop, I don’t know. Some employers think automation will solve the problem. That might happen over time, but it could be a long time.

In an ideal world, workers and business owners wouldn’t be adversaries. Each needs the other. But in the real world, demographic math favors one side or the other.

Employers had the power for the last few decades. This is now changing. Business practices will change, too.

The big question is which companies will recognize the new reality first.