Everyone loves it when the guy gets the girl, David defeats Goliath, or a pauper becomes a prince.

That's why these stories get passed down from one generation to the next… and eventually become animated Disney (DIS) films.

Just like the legend of a bow-and-arrow toting, Sherwood Forest-dwelling vigilante…

Robin Hood's story dates back to the 1300s. So this character might have only ever existed in fiction. But the idea of sharing the wealth is a very real one that traveled from Hollywood to Wall Street for a modern-day remake.

Closing the Wealth Gap… with an App

The Robinhood investing app set out to bring that sentiment to the retail investing set. 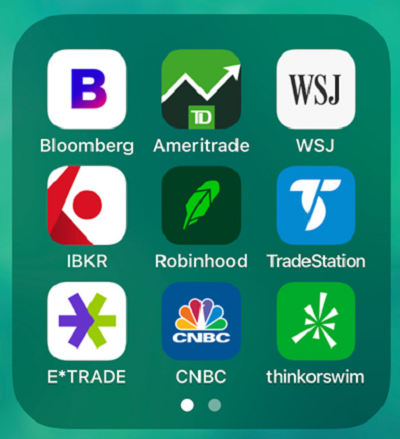 The company was founded in April 2013 by Vladimir Tenev and Baiju Bhatt, who had previously built high-frequency trading platforms for financial institutions.

Tenev and Bhatt's goal was to take some of the power back from Wall Street. They sought to provide everyone with access to the financial markets, not just the wealthy… just like the Merry Men would do with unsuspecting victims traveling through Sherwood Forest.

The idea was a hit. No one had ever offered stock trades with zero commissions. This made investing affordable for people of any age and income. Today, the app has over 13 million users with an average age of 31.

The company has no storefront branches and operates entirely online without fees… and, as customers found out last week, no customer service.

There's a Nemesis in This Story, Too

This past Friday, customers logged in to find that their shares had been liquidated and that withdrawals were pending… and not to their linked bank accounts.

When they reached out to Robinhood, they also found that it could take up to three weeks for the company’s fraud department to get back to them. A Robinhood spokesperson said this was no fault of theirs and that “a limited number of customers” were affected.

I’m not here to criticize Robinhood—I've been a customer since its earliest days.

But I am here to point out trends. And there are two big ones that we must take note of in the markets.

Robinhood set the stage for zero-commission trading, which attracted more people to investing.

When commissions were $9.99 (remember paying to enter a position and again when you exited, along with any applicable broker fees?), investors had to take that into consideration.

The added cash costs served as a good deterrent against trading with smaller amounts of money. Those fees could put a dent in your wins or amplify your losses in a big hurry. 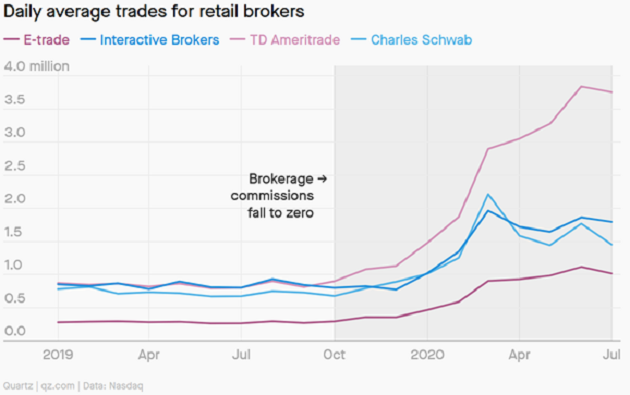 The coronavirus was the next prong in this change of brokerage culture. People found themselves with more time on their hands, $1,200 in relief money, and the need to make more cash.

So they turned to the markets.

About half of investors on the Robinhood app say they are brand-new to investing. We can assume at least some are making impulse bets… rather than using proven systems like the kinds our Mauldin Economics editors use to deliver consistent, market-beating results.

With no commissions, there’s no downside to buying and selling without a system… for the individual. But now, there are reports that some billionaires are complaining about Robinhood amateurs moving the market.

Shares of Hertz (HTZ) bounced 800% after declaring bankruptcy. The fact that the company does not have enough assets to meet its debt obligations somehow didn't raise a red flag.

And the momentum of investors continued into the summer. In June, 4.3 million shares traded each day, on average. That was about four times the numbers of trades at E*Trade (ETFC) for the same period. 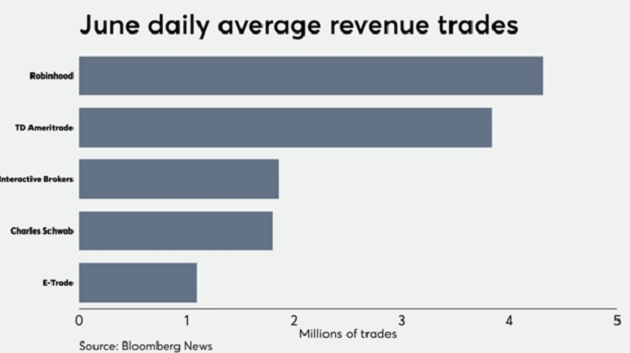 Investors don’t seem to be growing tired of Robinhood… even though it’s not perfect.

But the competition it distanced itself from has caught on. Will it catch up?

Trend 2: The Sheriff of Nottingham's Troops Are Joining Forces

Other online brokers cut their fees in rapid succession to compete with Robinhood. Of course, there are some exceptions to this rule. For example, trading on other exchanges or the over-the-counter markets (which Robinhood doesn't offer).

Fewer commissions did, in fact, mean more trades. But at the same time, it made making money more complex for the companies involved.

So, for their next act, the bigger brokers want to put their arrows into fewer quivers.

This means that Robinhood is the one setting the new standard for investing… not the giants from the past.

The Future Is Fintech

If the coronavirus taught us anything, it’s that we will be less and less dependent on brick-and-mortar locations… even for handling our financials.

It's clear that financial technology—fintech—is the future of banking and investing. But at what cost?

Most people still want to be able to reach a customer service representative when it has something to do with their money. Plus, you might want someone to call if you’re unable to place a trade due to an outage… which seems to still be an issue on Robinhood.

According to Downdetector, Robinhood has experienced outages every month so far in 2020. And the company is currently facing lawsuits due to outages in March.

And don’t forget the tragic story of the 20-year-old “options investor” who took his own life after he believed he was assigned almost a million dollars’ worth of leverage.

Could this have been prevented with a simple, answered customer service call? Sadly, we will never know.

What we do know is that trading and investing are far riskier without expert guidance—and getting help on demand (and potentially for a small fee) could go a long way.

Perhaps that might be the opportunity for platforms like E*Trade and Ameritrade to "rob" Robinhood of some of its thunder.

Tell us: What will the future of fintech look like? Do you think we'll be doing all our trading, investing, and banking in a single "super app"? If E.F. Hutton talked today, would everyone listen?

“and getting help on demand (and potentially for a small fee)”

That highlights one downside of “free” trading, there is no one to help you or, if there is, it’s after a “enter your security code, push one for English, due to high call volume, wait times will be….” experience. Then, that person will probably be a call-center, modestly trained, modestly experienced person working from a tightly circumscribed script / set of talking points that the legal department has stripped of most of its value.

The second downside is that firms still have to make money, so the fees get hidden in payment for order flow, or in up-selling to expensive fee-buried products (structured products for retail took off as commissions fell for a reason), etc. So, we’ve moved from a transparent-pricing model to an opaque one - happy?

Go back to that quote at the top. Somehow or other advice worth anything has to be paid for. What Robinhood has created is a platform for young, inexperienced investors or traders to execute trades for low cost (fees buried in pricing via payment for order flow) with no professional advice or guidance. For a minority of disciplined, able-to-self-train people - or experienced traders and investors - this will be fine, but for many, it will just be a lesson in how to lose money.

To your question, “Do you think we’ll be doing all our trading, investing, and banking in a single ‘super app’?” I’d say no. Today, the fee-based business is still a big one for that segment of the market that wants advice and is willing to pay for it. Is it changing, being pressured, consolidated, etc., yes, but many people know they need investment advice and guidance and will happily (or unhappily) pay for it.

Like many markets, there will be several “value propositions.” Do it yourself with no/low/hidden fees right up to an old-style “management fee for robust advice and guidance” model.

The consolidation we’re seeing now is, yes, a result of the fee compression. The questions I’d pose back are

- Is that really an unmitigated win for the consumer or has it led many to an advice-free environment like RH that will cost them in the long run as they don’t build core investment portfolios when they are young?

- Has it also, basically, taken away the advice option for many investors of modest means because fee compressions has made it unprofitable for firms to serve those clients?

- Has it led to more complex, high-fee products being sold as firms need to find ways to support their business models?

- Has it taken liquidity out of the market as firms, squeezed to cut every cost and risk, are no longer willing to be market makers and provide liquidity in volatile markets because their profits have been greatly reduced/eliminated by all this wonderful no-fee business?

If your biggest concern in trading/investing is commission’s - you shouldn’t be doing it !

You might want to look up the definition of “vigilante” ;)

With zero commissions, how can you afford great customer service? Bernhard Ebner

E*Trade is over-rated. Service used to be average to good but has dropped precipitously since.

I live outside the US and started trading with them in the early 1990s. Price, execution and availability of information were the main criteria for using them and I was overall satisfied with their service for trades execution.

However, after my father (co-account) passed away 13 years ago, I found it impossible to withdraw his name from the joint account. I sent officially witnessed copies of death certificates to multiple different parties within E*Trade to change the records and nothing was changed. I complained to a lot of different levels and now I cannot be bothered any longer.

Their sheer blockheadedness has stopped me from using their services to trade. I now get officially garnisheed by the US Tax system since I cannot present a certificate for my deceased father that he does not live in the US and is therefore (obviously) not liable to dead taxes.

In other words money is robbed from my account to pay taxes for a dead man.

I hope that the company and its employees go bankrupt and lose their 401K plans, retirement savings etc.

AM so over them.

Just because you can do something doesn’t mean you should.

Where Will the Future of Work Take You?