Regular readers know we look for strong insider ownership in the stocks we buy here at Smart Money Monday.

It signals that management wants the same thing we do: for the stock to climb higher.

This is one of the reasons I like Vistra Corp. (VST), the Texas-based utility I recommended last summer. CEO Curt Morgan purchased nearly $1 million worth of shares in May 2021. So, we know he’s confident about the stock’s long-term potential.

Like Vistra’s recent buyback announcement, for example. A reader asked me about it recently:

I bought VST after reading your article. VST is up 10% since then due to the $2B share buyback program and preferred stock announcement. What do you think about this move from management and how it will impact the stock?

This is great news for Vistra shareholders. It means management thinks the stock is undervalued. And the buybacks will cut the number of shares available, which should push the stock much higher.

Vistra has ticked up 2% since I first recommended it in July 2021. It’s still a buy at current prices. 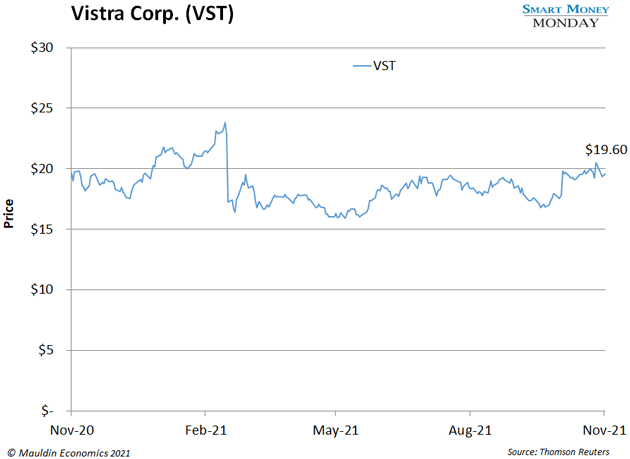 Fairfax is the “Canadian Berkshire Hathaway” I recommended in August. Another reader wrote in asking about it:

I bought Fairfax Financial. I would appreciate an update on his long-term outlook for this stock.

Fairfax is still cheap. In fact, it’s so cheap that the company announced a “normal course issuer bid.” That’s essentially a Canadian buyback. It gives the company flexibility to repurchase more stock.

Right now, Fairfax trades for less than 0.8X book value per share. That’s too cheap for a high-quality insurance conglomerate. It should really trade around 1.2X book value—which would put the stock 60% higher than it is today.

AT&T is a battleground stock, for sure. The old CEO set a pile of money on fire. And the new CEO is still rehabilitating the company.

Great article on T, thanks. But what's with the dividend? Isn't it going to be reduced by 40% upon completion of the WarnerMedia dump?

Yes, AT&T will reduce its dividend when it spins off WarnerMedia, which will merge with Discovery Communications (DISCA). However, shareholders will also get a piece of that new company (called Warner Bros. Discovery). The “value” of that should be around $7 per share (based on DISCA’s current price).

Keep in mind, these are ballpark figures, since we don’t know how the market will price the new Warner Bros. Discovery yet.

One thing has kept me back: Money managers don't like to show at year-end that they owned stocks that didn't go up… Do you think it might be better to wait until the new year to pick up some T? I enjoy your articles.

This reader is referring to something called “tax loss harvesting.” Money managers hate sticking their clients with big tax bills. So, they might sell some losers to offset realized capital gains. 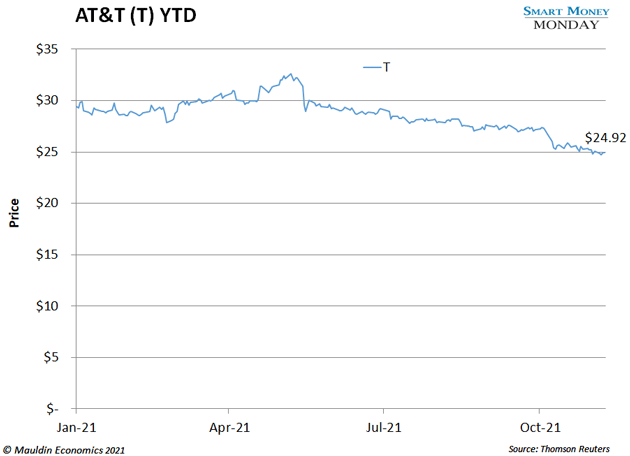 I can’t speak to anyone’s specific tax situation (that’s what your tax pro is for). However, in general, it might be better to buy after tax loss harvesting… if you could time it perfectly. But no one can.

As one reader put it…

Thank you for your sharp and accurate words… So far, my only worry is about the follow-up… [Will you] let us know when to buy more or sell these stocks?

Great question. Every week I share a new investment idea in Smart Money Monday—often an overlooked small cap stock or a specific investing strategy. In other words, an idea to help you make money.

Occasionally, I will update you on those ideas, like I have today. But we’re not building a formal portfolio here.

I have a new premium advisory in the works, though. It will focus on my highest-conviction small-cap stocks. And that’s where you’ll find the most time-sensitive buy/sell guidance. You’ll hear more about this new service in the coming weeks.

So, thank you all for your questions—and stay tuned.

You’re probably familiar with my colleague Jared Dillian. He recently launched a new podcast called BE SMART, and it’s great… kind of like having a fun, rapid-fire chat with Jared about money twice a week.

I’m also tuning into Jared’s Live Q&A this afternoon at 1 pm ET. You can still grab a spot at this live video event by clicking here.