“The problem with being bullish is it’s harder to sound intelligent.”

A former colleague told me this a few weeks ago, and it’s true: doom and gloom get clicks. But I’d much rather make the right call than the scary one… 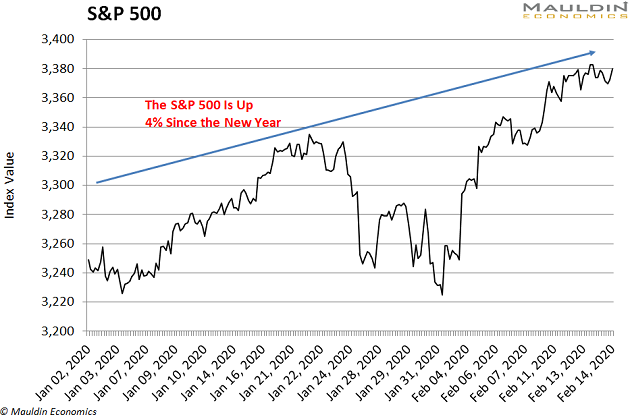 Utilities are leading the way here, as we discussed last week. Technology stocks are also doing well, with the tech-heavy Nasdaq up 8.6%.

International Business Machines (IBM), which I recommended on January 8, has bested both the S&P 500 and the Nasdaq: 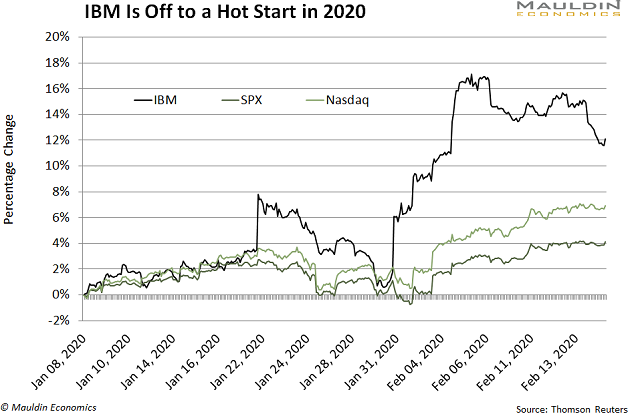 The best part of all this is that stocks still have more room to run.

You likely know that US stocks are in the longest bull market of all time. The S&P 500 has climbed an impressive 330% since February 2009: 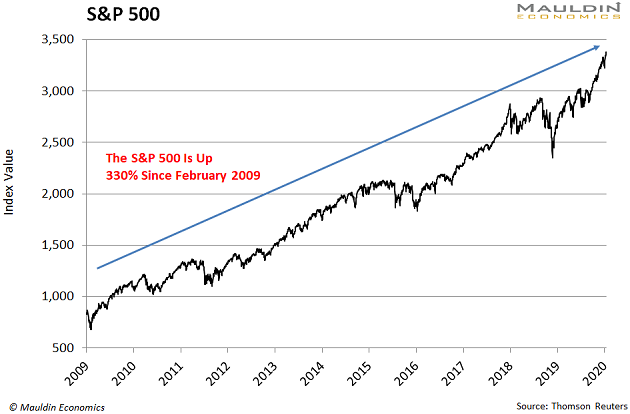 The longer this goes on, the more investors think, “this just can’t last.” They get nervous about the inevitable pullback—and they end up missing out.

Let me put you at ease. Yes, this is the longest bull market in history. But it’s far from the most profitable. For perspective, take a look at the S&P’s last five bull runs: 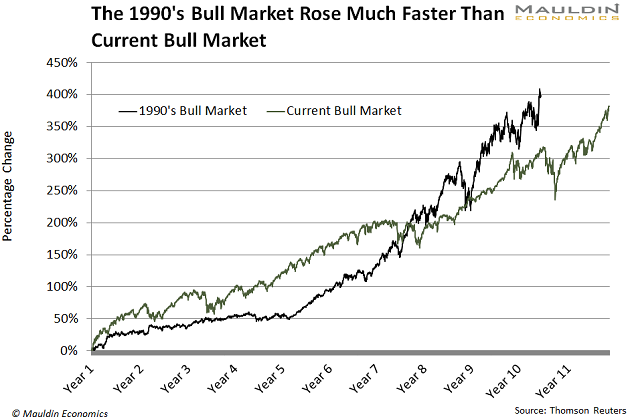 The takeaway here is this bull market isn’t as unusual as some pundits would have you think.

There’s no cosmic law requiring bull markets to fizzle out at a predetermined point.

After the initial 330% gain, the S&P rose another 90% over the next three years. 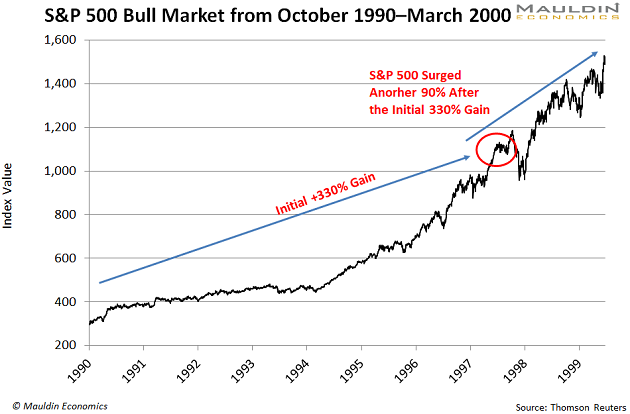 In other words, stocks could rocket a lot higher without flying into uncharted territory.

Even so, you should still be picky about what you buy. Longtime readers know I think safe and reliable dividend paying stocks are your best bet…

Stocks with the highest dividend yields have quadrupled in value during this bull market, according to Bank of America. That beats the S&P 500, which has essentially tripled.

That means dividend-paying stocks outperform in bull markets. And since I expect this bull market to march higher, it makes sense to buy these three dividend payers now.

The greying population is a big plus for Medtronic. In the US, 10,000 baby boomers are retiring every day. These folks will demand more medical care as they age. This is one of the reasons Medtronic’s stock price and 2.0% dividend yield are so safe and reliable.

Next up is trash kingpin Waste Management (WM). Waste removal stocks like WM are some of my favorite stocks. As the US population and economy grows, people will naturally create more trash. That’s a guarantee.

Waste removal is also highly regulated. That means it’s very difficult for companies to break into this market. And since Waste Management (WM) is the largest player, it has the most leverage in the industry. So the stock and its 1.9% dividend yield are rock solid.

Finally, we have Goldman Sachs (GS). The global investment banking giant has risen right along with In the Money holding JP Morgan Chase (JPM). And for good reason: The banking sector is benefitting from the newly invigorated US stock market.

That translates to higher fees for investment banks. And since Goldman Sachs is also one of the key players in the rising blockchain market, the company and its safe 2.1% dividend yield have a lot to offer.

Speaking of Goldman Sachs, we’ll have one of the firm’s former general partners as a presenter at the upcoming SIC 2020: Leon Cooperman. He has one of the sharpest minds in the business, and I can’t wait to see him on stage.

If you are interested in rubbing shoulders with the most accomplished and famous people in finance and economics—like keynote speaker Sam Zell and other big-name presenters—I suggest you secure your tickets ASAP. By registering today, you’ll save $800 off the retail price, but this priority pricing won’t last much longer. Click here to get all the details and register.

Ginny is out as IBM’s CEO as of a few weeks ago. Shares are up 15% since the news, which came a few months after I recommended readers buy the stock. Their new CEO is the former head of IBM’s fast-growing cloud computing division.

And I’m a big fan of Ben Hunt and his thought process. I enjoy his analysis, particularly his writing on financialization. It’s this theory, in part, that informs my outlook as to why stocks have room to run.

While I disagree with the financialization of our equity markets, complaining about it is a fool’s errand. You play the cards you’re dealt. And if you’ve been playing them as I’ve advised, you should have a lot of green in your portfolio.

While Bull Markets don’t come with an expiration date, recessions and bear markets do happen and this Bull Market will end someday and as I read John’s letter, it will end badly.
With regard to Medtronic - ok, it’s a good company.  But, while 10000 boomers are retiring each day, how many are dying.  Seems to me the ones closer to dying need more of their product until they don’t.

Likewise with Waste Management, another good company but I would like to see some stats on whether we are generating more trash.  Don’t think the younger generations are.