It’s been a long time coming.

PIMCO, the world’s largest bond hedge fund, has been warning investors about this for months. So has Federal Reserve Chairman Jay Powell.

Ford’s share price dropped 3% on the news. But don’t let the relatively small drop fool you. This is the start of something much bigger.

A recent Moody’s report suggests as many as 47 companies are teetering on the edge of the “BBB cliff,” just barely above junk bond status. Ford was likely the first of many Fortune 500 companies that will fall over the edge in the months ahead.

As I’ll explain shortly, a mass downgrade of corporate debt could force institutional investors to dump hundreds of billions of dollars worth of bonds, leading to a crisis in the bond market.

Of course, we mostly focus on dividend-paying stocks here at The Weekly Profit. So you’re probably wondering what this all means for us.

To start, it’s fairly common for at-risk companies to cut their dividends to stave off a credit downgrade. And a full-blown crisis in the bond market would also tank US stocks. (One more reason it’s so critical to only hold the most resilient dividend-paying stocks.)

In a moment, I’ll tell you about three of the highest-risk companies. If you hold any of these stocks in your retirement account, you should sell them fast.

Let’s Talk About the “BBB Cliff”

Remember, when you invest in corporate bonds, you’re effectively loaning the company money. The company’s credit rating indicates how risky its bonds are—specifically, how likely the company is to stiff its lenders and default on its bonds.

BBB is S&P’s lowest possible investment grade rating for corporate bonds. Everything below that is considered “junk.”

This is what investors are referring to when they talk about the “the BBB cliff.” It’s the last stop before junk bond status. 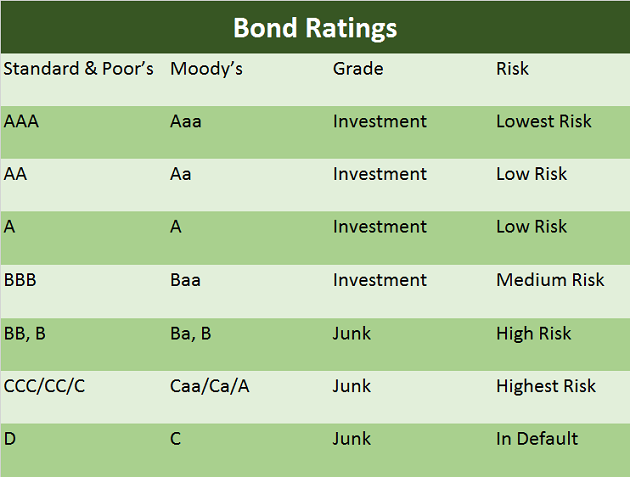 Of all the investment-grade corporate debt, BBB-rated bonds are the most vulnerable to a junk downgrade during a recession.

Historically, this hasn’t been a big problem. For a long time, BBB-rated debt only made up a small sliver of the bond market.

However, in the last 10 years, BBB-rated bonds have gone from 34% of the investment-grade bond market to over 50%. 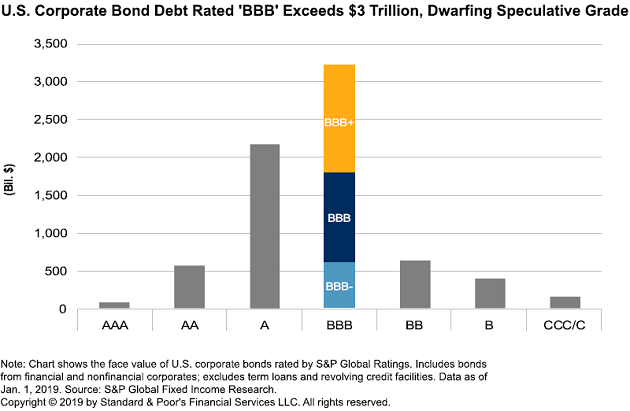 Today, the BBB debt market is worth $3 trillion—up from $800 billion in 2008. A decade of ultralow interest rates has fueled this massive increase.

Now, we’ve been talking about recession signals a lot lately. If the economy rolls over and interest rates rise—as they do in every recession—a lot of this BBB-rated debt will get downgraded to junk.

At the same time, pension funds and mutual funds hold huge amount of low-grade debt. But they typically can’t hold junk bonds. So a mass downgrade would force them to dump their BBB-turned-junk bonds on the market.

This Poses a Huge Threat to US Stocks

Think back to the days just before the housing crisis. If only a handful of people had defaulted on their mortgages, it wouldn’t have mattered much. But millions of people defaulted, and it triggered a crisis that spread far beyond the housing market.

The same logic applies to the BBB cliff.

When one multi-billion-dollar company like Ford is downgraded, the junk bond market can absorb its bad debt.

But 50 multi-billion-dollar companies at once? That would be a disaster.

Pension funds would be forced to sell the downgraded debt on their books (even at a loss). And all of these new junk bonds would overwhelm the market.

Keep in mind, this isn’t just a problem for the bond market. A mass downgrade would also tank those companies’ stocks… and potentially the entire stock market.

And, considering that Moody’s took the unusual step of downgrading Ford without putting it “on watch” first, there could be wave of similar downgrades with little to no notice.

Like I said, the Ford downgrade didn’t surprise me.

I’m always on the lookout for safe and reliable dividend-paying stocks. And Ford’s stock is anything but. With a lot of low-grade debt and an unstable 6% dividend yield, it was an obvious target.

But remember, there are at least 50 or so other companies at risk of falling off the BBB cliff. Let’s take a closer look at three of the riskiest…

Semiconductor giant Broadcom Inc. (AVGO) is the largest of the bunch. Before 2018, Broadcom was a pillar of financial responsibility. Then the company surprised investors and bought software company Symantec for $10.7 billion.

Ever since, Broadcom’s BBB-rated debt and its dividend have been on shaky ground.

US industrial giant General Electric (GE) is also at risk. Moody’s downgraded GE’s bonds last year to three notches above junk. Since then, the company’s stock has plunged 28%.

If GE is downgraded to junk, it would instantly increase the junk bond market by 10%. That’s how large its debts are.

Then there’s cell tower behemoth American Tower Corp. (AMT). The company has been on a full-blown debt binge lately. It issued $1.3 billion in low-grade, BBB-rated bonds in 2019 alone.

Like Ford, it’s at risk of being downgraded without warning.

All of these companies are hanging on the edge of the BBB cliff. Once the economy starts rolling over, these bonds will become toxic. When that happens, it could crush their stock prices.

If you own Broadcom, GE, American Tower, or any of the other 50 or so at-risk companies, it’s time to sell before their share prices plummet.

I am curious why AMT would make your list of three (The other two seem more obvious).  The stock has performed very well and tower fundamentals seem to be fairly positive, even with the Sprint/T-Mobile overhang.

When the moment arrives, there will be blood in the street. To me, this suggests a buying opportunity on the horizon for both the stocks and bonds.