Last week, I told you that the stock market does not care who’s president.

The trading action since then has proved it!

We just saw the best election week for stocks since Roosevelt beat Hoover in 1932.

The S&P 500’s 2.2% return last Wednesday was also the best-ever post-election gain in history. And its 7% return for the week was its second-best showing in 2020.

That Wasn't Even the Remarkable Part

Rather, it's that this happened while the votes were still being tallied. 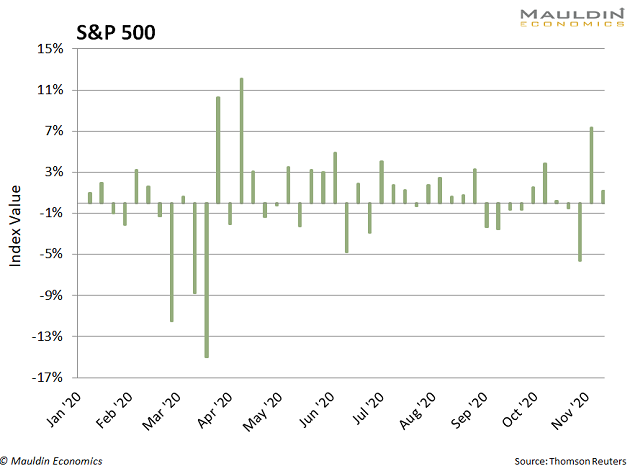 We know that markets hate uncertainty. Yet, stocks rallied without a clear winner at the top of the ticket.

The Associated Press didn't call the presidential election in favor of Joe Biden until Saturday morning.

But investors were already sure of one thing…

2 Years (at Least) of Gridlock Are Now Assured

Stocks rallied on expectations of a divided government.

On Wednesday morning, it was clear Democrats would keep control of the House and Republicans would likely retain Senate control. While the latter won’t be confirmed until two Georgia run-off elections on January 5, investors are betting that Republicans will win both of those Senate seats.

Because of that, it didn’t matter who controlled the White House. With the legislative branch divided on party lines, neither party would be able to pass sweeping legislation.

This kind of gridlock has been historically good for stocks.

Big legislation—like raising corporate and capital gains taxes—causes uncertainty. So, markets were thrilled with the expectation that there won't be big changes in store.

While this is good news for the S&P 500, there are a few sectors that benefit more than others from this political gridlock.

Will This Divided Government Be Good for Your Stocks?

Every market cycle is different. As a result, the data on whether a divided government is good for stocks is mixed.

Yardeni Research notes that the S&P 500 finished the year higher 60% of the time when neither party had full control of the government. But the extent of those returns varies.

As it stands, the incoming Senate is 48-48. Whatever happens in Georgia in January, stocks will still win.

But based on last week’s rally, it’s pretty clear investors were happy to avoid potentially higher taxes and more regulation.

And one sector was more exuberant than others.

If Tech Stocks Are in a Bubble, It’s Only Getting Bigger

Technology stocks have been on an incredible run. The Nasdaq 100 is up 159% over the last five years alone. 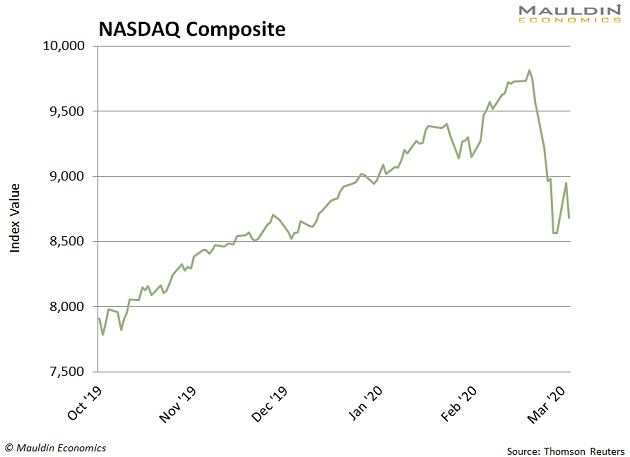 Despite the lofty performance, I don’t believe we’re in a tech bubble.

If you compare today's tech stock prices to their March 2000 peak, they are not expensive: 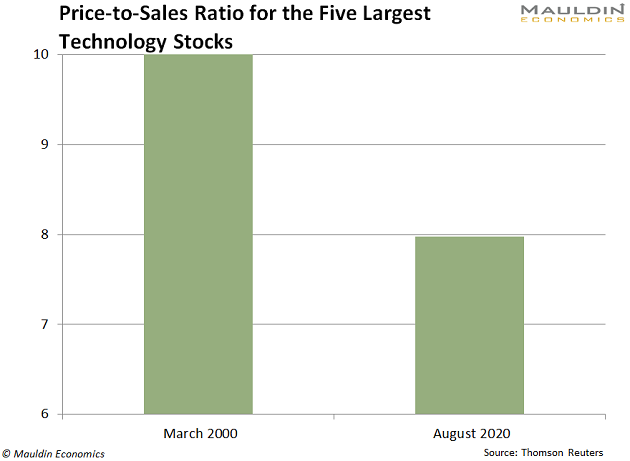 The five largest technology stocks are 20% cheaper than they were in March 2000.

And that’s with the Federal Reserve’s easiest monetary policy in US history.

With a divided Congress incapable of slapping any significant antitrust legislation on the sector, I expect tech will continue its run.

These 3 Techs Have Plenty of Room to Run

I’ve been saying for months that technology stocks are not in a bubble. Since I first brought that to your attention in September, the tech-heavy Nasdaq has run up 9%: 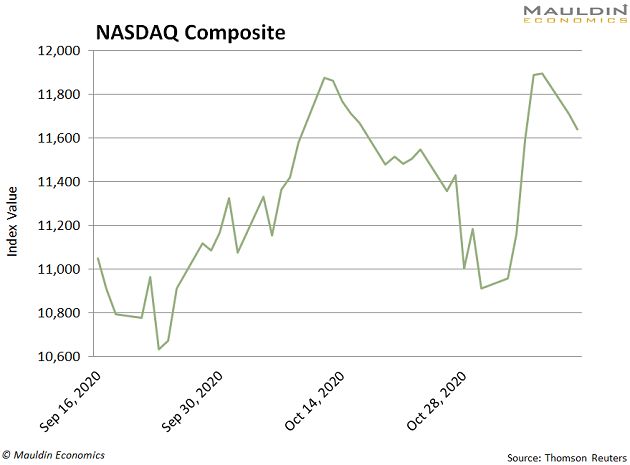 With a divided Congress, Hewlett Packard Enterprises (HPE) should continue to outperform. The company is a solid player in the booming cloud security market—and I think we can all agree that our dependence on the cloud is only going to grow in the next four years.

Plus, HPE’s 5% yield scored an impressive 86/100 on my proprietary Dividend Sustainability Index. This tells me its huge dividend won't get cut anytime soon.

Another big winner will be Walmart (WMT). This classic brick-and-mortar retailer has become one of the fastest-growing e-commerce companies in the US.

Walmart grew its e-commerce sales 74% over the last year. And many people who never dreamed they'd shop online now can't picture themselves returning to crowded stores. 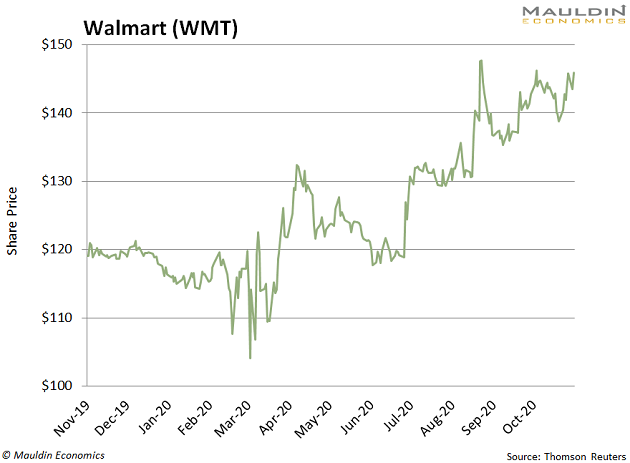 There are few better options than Walmart for income investors. This Dividend Aristocrat has raised its dividend for an incredible 47 years in a row.

The company pays a modest 1.7% dividend yield, which my Dividend Sustainability Index tells me is safe AND set to grow over the longer term.

Last on my list is IBM Corp. (IBM). The 109-year-old company has broad exposure to the red-hot technology market.

Big Blue controls 90% of all credit card transactions and 50% of the world’s wireless internet connections. On top of that, it generates lots of sales from cloud security. So it knows a thing or two about securing data for individuals and corporations.

IBM also pays a hefty 5.5% dividend yield. And with a near-perfect 99/100 score on my Dividend Sustainability Index, this huge dividend isn’t getting cut anytime soon.​