The city is dealing with a crippling housing shortage. Not to mention a staggering number of homeless people. But instead of tackling these issues, it’s worrying about “vaping.”

In late June, the city government voted to ban e-cigarette sales completely. That means no brick and mortar sales. And no e-cigarette deliveries for online purchases.

Many cities already restrict vaping and e-cigarette sales. But San Francisco is the first major US city to ban sales outright.

Granted, it’s a cultural and political outlier. But other cities are already considering similar laws. So this looks like the start of a bigger trend that could weigh heavily on certain tobacco companies.

Now for the good news…

Despite that threat, tobacco stocks are still a great, recession-resistant investment. I’ll explain why in just a moment—and share the one tobacco stock that could even benefit from a clampdown on e-cigs.

The 800-Pound Gorilla of E-Cigs

E-cigarettes hit the US a little over a decade ago. Now it’s a $25-billion market.

The e-cig explosion has been a big boon for certain tobacco companies.

Juul is the 800-pound gorilla of the e-cigarette world. It has a 70% market share. (Ironically, it’s based in downtown San Francisco.)

Juul expects sales to grow by 160% to $3.4 billion in 2019. But if other cities follow San Francisco’s lead, this figure—and Altria’s 35% cut—could shrink dramatically.

It would hurt other e-cig-dependent tobacco companies as well, like UK-based Imperial Brands (IMBBF). Imperial generates around 3% of sales from its e-cigarette line. That sounds small. But e-cigs made up 40% of the company’s sales growth over the last two years.

Then there’s British American Tobacco (BAT). The company created its own vapor brands, including Vuse and Vype. While British American’s core tobacco sales were flat in 2018, the vapor segment grew 19% over the last year.

Governments will likely continue to restrict vaping and e-cigarette sales. This shouldn’t be all that surprising.

E-cigarette use among minors has doubled since 2017, according to a recent survey from the National Institute on Drug Abuse. It was the largest year-over-year jump for any substance ever measured by the 44-year-old survey.

That sort of thing makes parents panic. And panicked parents can push local governments to “do something,” even if the overall public health benefit is questionable.

As Dr. Steven A. Schroeder, a professor of health at the University of California, San Francisco, put it, “It’s really smart politics but dubious public health.”

Nevertheless, more e-cig restrictions could stifle a major growth driver for tobacco companies. But that’s not the end of the world for Big Tobacco.

And there’s a good reason for that: Cigarettes are highly addictive. That’s one of the reasons tobacco stocks are such a great any-weather investment.

You only have to look back to the global financial crisis to see this.

US stocks fell 27% between August 2007 and August 2010. But tobacco stocks held up remarkably well.

Altria and British American, which are a good proxy for tobacco stocks, grew 7.9% over the same period, as you can see in the chart below. 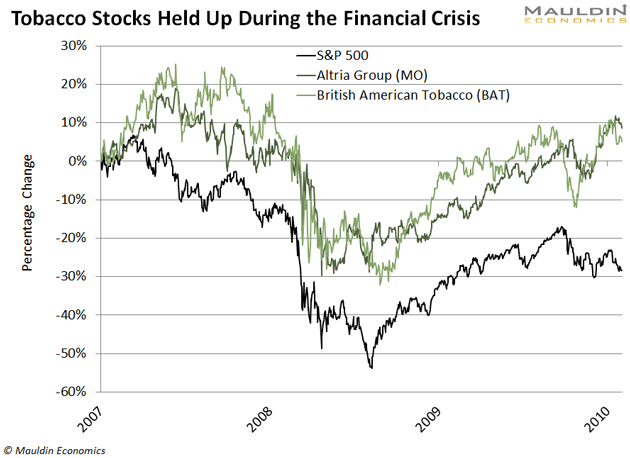 This wasn’t a fluke, either.

In other words, while vaping bans don’t bode well for certain tobacco companies, that doesn’t necessarily matter for us. Many tobacco stocks are still great, recession-resistant investments.

It doesn’t have so much as a toe in the e-cigarette market. So e-cigarette regulations can’t hurt the company. (Perversely enough, they might even help, as smokers return to traditional cigarettes if and when e-cigarettes become harder to buy.)

This is part of the reason Universal Group is the best tobacco company to buy right now. And for dividend investors like us, it offers a safe 5% dividend yield.

Don’t Get Smacked on the Way Down

Here at The Weekly Profit, we’re focused on finding safe and stable dividend-paying stocks. These are companies you want to own no matter what’s happening in the economy or the market.

Frankly, most investors take on too much risk. This leaves them vulnerable when the market heads south.

That’s especially true right now. As you likely know, the stock market is near all-time highs. And the US economy is nearing the end of a decade-long expansion.

Meanwhile, several closely watched indicators are pointing to a recession in the coming months.

That’s why you should start preparing your portfolio now. After all, nothing goes up forever. And you don’t want to get smacked on the way down.

Yes, I know tobacco companies make addictive, unhealthy products. So does Coca-Cola (KO). And Pfizer (PFE). And a slew of other companies.

My job is to help you find the best dividend-paying stocks—not to play morality cop. We’re all grown-ups here. You can decide for yourself if investing in tobacco is something you’re comfortable with.

But bear in mind, the industry’s profits are almost guaranteed. So it’s at least worth a look.

P.S. One of those “closely watched indicators” I mentioned is called the Diamond Cross. It’s a once-in-a-decade event that signals a looming recession. But there’s a silver lining… it’s actually a great sign for one ultra-resilient sector. When the Diamond Cross showed up in July 2000, a recession struck shortly after and dragged the S&P 500 down 17%. Meanwhile, this sector soared 28% over the same period. Get all the details on this ultra-resilient sector by clicking here.