Regular readers know me as the safe income guy.

I’m always on the hunt for the safest and most stable dividend-paying stocks.

But today we’re looking at something a little different…

The best way to ride Bitcoin’s current bull market without taking on a lot of risk.

You probably know that Bitcoin is a digital currency, or “cryptocurrency.” It’s decentralized, meaning you can trade it for goods and services anywhere in the world without going through a bank.

Bitcoin is the best known of thousands of different cryptocurrencies that have sprung up in the past decade.

It’s also a polarizing topic. Some economists think Bitcoin’s value should be $0. Others think it’s as revolutionary as the internet.

But one thing is certain: The price of Bitcoin is incredibly volatile. This makes it a non-starter for most income investors.

Fortunately, I’ve zeroed in on a company that actually benefits from Bitcoin’s volatility. It’s a safe and stable way to profit from Bitcoin without exposing yourself to a lot of risk.

More on that company in a moment. But first, let’s take a closer look at Bitcoin’s wild price swings…

Bitcoin Is Far Too Risky for Most Investors 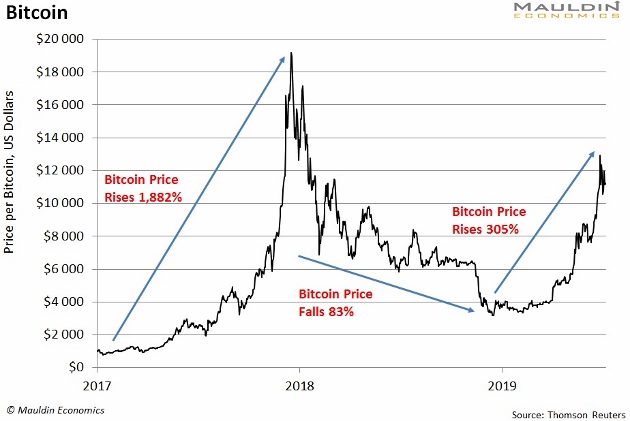 Now we’re back in a Bitcoin bull market. Over the last six months, Bitcoin’s price has rallied over 300%.

I’m not sure about you, but most people can’t stomach that much volatility. And frankly, they shouldn’t. Buying Bitcoin is simply too risky for most investors.

The Low-Risk Way to Profit from Bitcoin’s Volatility

Instead of buying Bitcoin directly, we’re looking at companies that benefit from Bitcoin’s volatility.

One of the best ways to do this is through Bitcoin’s “picks-and-shovels” stocks.

The term comes from the California Gold Rush. Most of the miners who flooded into California during the 19th century never struck it rich. And many went broke. But smart businessmen figured out that selling picks, shovels, and other essentials to the miners was much more profitable—and far less risky.

In the Bitcoin universe, the best picks and shovels stock is CME Group (CME). The company operates the leading Bitcoin futures exchange. (It’s also one of the only exchanges of its type.)

At its simplest level, futures contracts let people bet on how much the price of something will rise or fall.

Futures contracts also act as a form of insurance. For example, say you own one bitcoin. You don’t want to sell it. But you want to protect yourself in case the price falls. You can do that through a futures contract. It lets you lock in gains and limit your losses.

CME Group is the leading company offering this big plus. And that means big money for the company...

A Billion-Dollar (Plus) Record Day

When Bitcoin’s price is on a run, as it is right now, CME makes a lot more money.

See, every time someone buys or sells a CME Group Bitcoin contract, the company takes a small fee. So when trading volume goes up, so does CME’s bottom line.

And volume is on the rise. In fact, the company reported record volume on its Bitcoin future exchange on May 13. It processed 33,700 contracts, equal to $1.35 billion.

Volatility Is Good for This Company

Remember, we focus on safe and stable dividend-paying stocks here at The Weekly Profit. And CME fits that bill.

Back in February, I even recommended CME Group in my premium investment service Yield Shark.

The plan was to buy CME to profit from rising stock market volatility. That’s because CME doesn’t just benefit from Bitcoin’s volatility. It also benefits from stock, bond, and currency volatility.

Our position in CME is up almost 14% since I recommended it. That’s more than double the S&P 500 return over the same period: 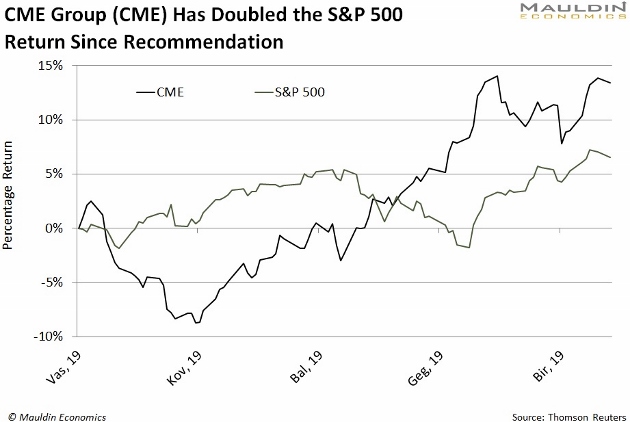 It’s been a great trade so far. But it still has more room to run…

With trade war news rag dolling markets and stocks at all-time highs, now is a good time to hold companies that benefit from volatility.

While Bitcoin futures only make up a small part of CME’s business, the rising interest in cryptocurrencies—which are now a $350-billion market—should continue to drive interest in their platform.

So, while Bitcoin is too risky for most investors—remember that 83% price drop—you still have an opportunity to profit from Bitcoin’s bull run by investing in a safe and stable company like CME Group.