I am going to melt your brain today. Vanguard has an ETF that allows you to get long world stock markets. The ticker: VT.

Well, if you got long the human race circa 1880 or so, you have done pretty well. It is hard work being short human ingenuity. But there have been some big drawdowns along the way! We had a huge depression in the 30s and a die-off in the 40s. Global stock markets have certainly not gone up in a straight line—although they are today. 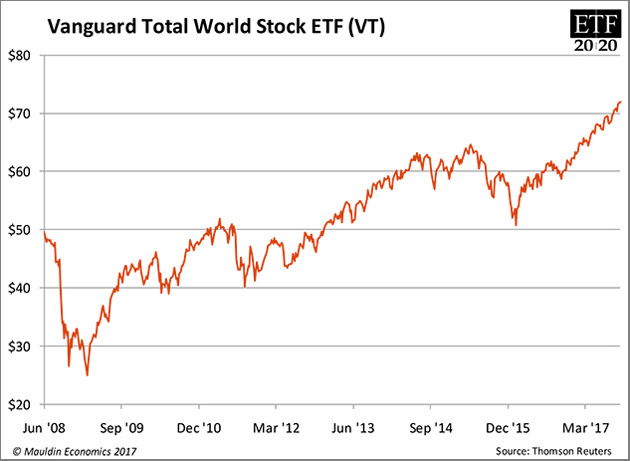 I can’t see myself getting long the human race because there are pockets of humanity that I am very pessimistic about. I am pessimistic on Canada, Australia, and Sweden, with their giant credit bubbles. I am bullish on Chile, which is making positive political change. I am bullish on Bangladesh, which has incredible demographics.

What I am essentially saying is that I am smart enough to pick and choose countries that are going to outperform. Which shouldn’t be super controversial—most national economic wounds are self-inflicted. It’s not hard to distinguish between good policy and crappy policy.

So really the only reason you would buy VT and get long the world is if you think that efficient market hypothesis (EMH) applies to global stocks—the idea that you can’t beat the world market by picking and choosing countries.

I have no idea if there has been any research to support that statement. I can tell you from personal experience that I have had no trouble beating VT by making targeted investments in individual countries (usually with ETFs). But if EMH doesn’t apply to countries, why would it apply to stocks?

I told you I was going to melt your brain. I’m going to leave that question unanswered for now (partly because I am not smart enough to answer it)—and instead talk about the audacious idea that one might actually want to short human progress.

Selling short VT is the ultimate act of pessimism—you are saying that things, in the general sense, are going to get worse. Looks like most of you think that is going to be the case.

I kinda feel like doing it just to make a point.

Let’s dig deep into this. As I mentioned earlier, if you bought world stocks in 1880 and stayed long, even throughout the nasty bits, you are pretty happy. But in the grand scheme of all human history, that is a pretty small sample size. We had a stretch of several hundred years that was pretty dark. We called them the Dark Ages.

What was the defining characteristic of the Dark Ages? Unreason. The opposite of the enlightenment. The use of physical force over mutually beneficial trade.

Could we go back there? Maybe not all the way back. But whenever it looks like ignorance is making new highs and trade and capitalism are making new lows, I get anxious.

None of this is quantifiable. But you might have noticed in the last political cycle that flat-earthers made a comeback(!) It should not come as a surprise that the flat-earthers were not too keen on global trade.

The stock market has gone straight up under Trump, but it won’t forever—especially if he gets his way and starts a trade war with China (and everyone else). If you were wondering what I thought a global sell signal might be, that is it.

For the optimists out there, by all means go out there and start lifting offers on VT. Never mind the fact that it trades at a 22 P/E. Never mind that it has all the dirtbag countries with the good countries. You just want to get long people. There you go.

In my mind, if you buy an ETF like VT (and correspondingly, SPY) you have just given up. Given up picking stocks, yes, but also you have given up having an opinion on anything. It is a common misperception that stocks are going up forever, no matter where you are in the world. Maybe not—what about Iceland? If you dollar-cost-averaged there, you are still underwater. 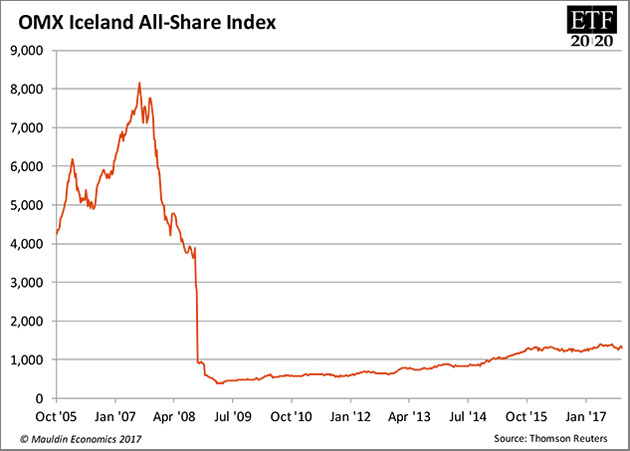 As you probably saw, the special offer for ETF 20/20 expired yesterday, so if you missed it, I can’t really help you out. But the good news is that, even at the regular price of $79 per year, it is still cheap!