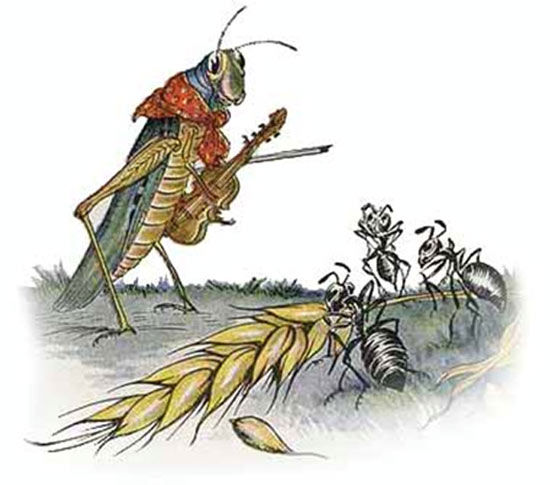 This tweet was getting retweeted all over the place last weekend. Apologies for the bad language. 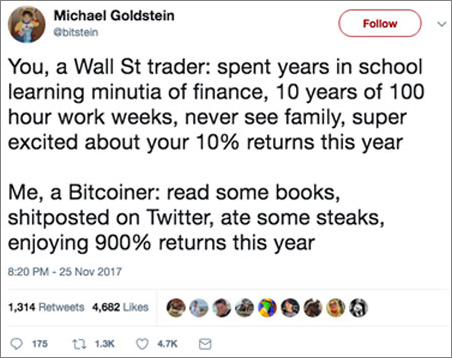 For starters, the guy’s Twitter handle is “bitstein.” But anyway. This is the fable of the grasshopper and the ant.

The grasshopper is a “ponzi monkey hitting refresh 50 times a day,” according to Twitter user @prestonjbyrne. We’ll see who’s got something to eat when winter comes.

At the top of the cycle, there are always people who look down on the working stiffs, the ants. Actually, it seems like the loudest voices in finance these days are people who tell you to be long SPY, Amazon, or even bitcoin—unhedged. I don’t think we should be denigrating people who think it’s prudent to wear a seat belt.

Getting Rich Slow (with an Option)

I am channeling Taleb here. A wonderful portfolio strategy is to put 90% of your money into safe assets with a stable return—and to speculate on long shots with the remaining 10%, stuff that can give you 10x or 100x or 1000x returns.

Of course, bitcoin falls into that category, but you could argue that the bitcoin ship has sailed—we’re in full tulipmania now. 2014 would have been a nice time to have that idea1. Now, it is too late.

It is too late for a lot of longshots—venture capital, cryptocurrencies, Internet stocks… the 100x returns have already been made. Yes, there is always a bull market somewhere, but the trouble with investing in 2017 is that there are bull markets everywhere.

But that sentiment—anything is possible—is not always present. There are some points in history where it seems like nothing is possible. That was the case not long ago—in 2009.

If you know a little bit about finance, you know that valuing equities without dividends can be tricky, and a lot of it depends on your assumption of what a “terminal value” might be. This also depends heavily on interest rates, which happen to be low.

So, lots of ebullience + easy monetary policy means these moonshots have very high valuations. With a little foresight, we might have been able to predict that these conditions would develop—but I think no reasonable person thought it would go this far.

You may think watching other people get rich is bad. But there is nothing quite like the smug satisfaction of sitting on a pile of grain in the winter, with the grasshoppers starving outside, and knowing that all the schlepping paid off.

Sure, some people just have a higher tolerance for risk. Their life isn’t complete unless they are watching their net worth rip around at a rate of 15% a day. There has always been a fine line in this business between investing and speculating. Reflect a little on which one you have been doing.

1Someone actually pitched me on Ripple (XRP) few years ago and I was sold on the idea. I fully intended to do the heavy lifting on how to buy some of that stuff, but life intervened and I never got around to it. Shame on me.

Well, my dermatologist told me on my visit yesterday he is buying Bitcoin. Need we say more.
Reminds me of when a friend with no financial education was “making it big” flipping condos before the crash. She quit her job to do that full time…..
Or the time I saw a guy dressed in a gold suit outside a pawn shop holding a sign saying “we buy gold” running up and down the street dancing.
Each time, I say, yes, we are close to the top. Hold on and wait….It is hard to do at times.
Thanks for reminding me.