PetMeds Express Inc. (PETS) was one of the world’s best-performing stocks last week.

Regular readers might recall that I recommended PetMeds, which pays a +4% dividend, back in June.

Shares have soared an incredible 71% since. 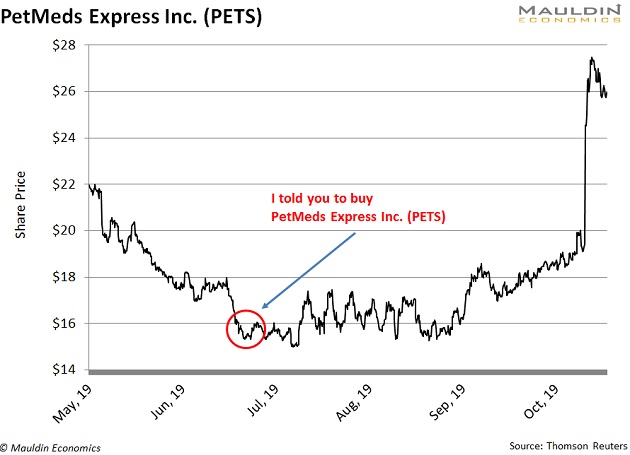 PetMeds isn’t the only pet health company on a roll…

Zoetis Inc. (ZTS) is the world’s largest manufacturer of anti-infectives, vaccines, and other animal health products. I recommended the stock at the same time as PetMeds. It’s climbed 12% since—more than triple the return on the S&P 500 over the same period.

The third stock on our June “buy” list was Pets at Home Group (PAHGF), a UK veterinary services company. Shares have shot up 23% since then.

The best part about all this… the pet health boom is far from over.

This figure has grown around 2% annually since 2011. But spending on those pets has increased almost 7% annually.

Spending on veterinary care is growing especially fast. From 1991 to 2015, it shot from $4.9 billion to $35 billion. That’s three times faster than US GDP grew over the same period.

This rapid increase in spending is a big reason why companies like PetMeds and Zoetis are crushing the rest of the market. And they’re not alone.

Ever take your dog to the vet for shots? The special needles they used probably came from Idexx. 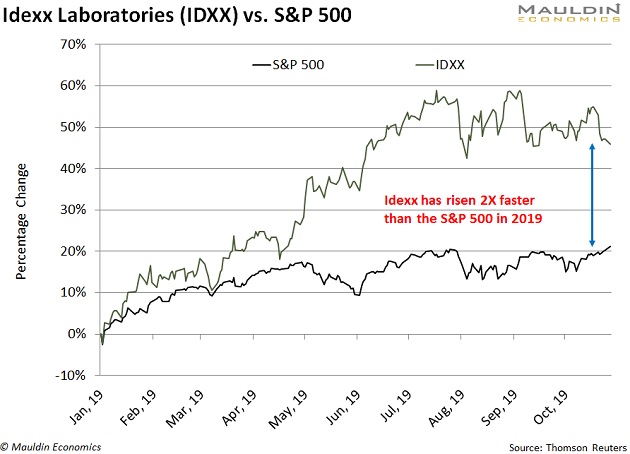 Spending on pet health is rising for a few simple reasons.

To start, American family formation is near all-time lows, according to Yardeni Research.

This isn’t just a US phenomenon, either. Worldwide, the number of cat and dog owners is expected to grow 20% through 2024.

And, as we discussed earlier, people are spending a lot of money on these pets.

It’s rare to find an industry where sales actually grew during the last two recessions. But pet health is one of them. 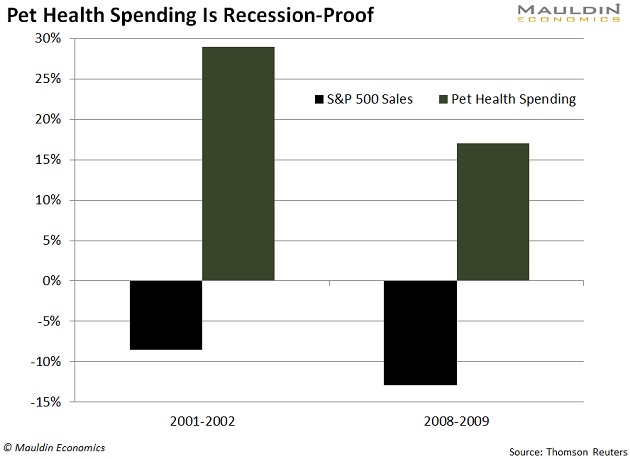 There’s a straightforward reason for this pattern: people spend money on their “fur babies” no matter what. After all, pets are “part of the family” now. So things would have to get pretty ugly to make you skip Fido’s heart meds.

Mauldin Economics founder John Mauldin expects 2020 to be the most volatile year in stock market history.

We’ve already seen signs that volatility is picking up. The S&P 500 rose or fell 1% or more on 5 days in August alone. That might not sound like much, but it’s pretty significant. It only happened on eight days during all of 2018.

Meanwhile, the S&P 500 is in its longest bull market in US history. And the US economy is enjoying its longest growth streak since World War II.

Eventually, this party will end. The economy will slip into a recession and most stocks will pull back.

I’ve mentioned before that I expect a recession sometime around September 2020. So now is a good time to start stocking up on recession-proof stocks if you haven’t already.

You already know about PetMeds, Zoetis, and Idexx Laboratories.

They’ve all had an incredible run over the last six months. But at this point, they’re also expensive.

If you don’t have a position in these companies already, there are other options to consider…

Dechra Pharmaceuticals PLC (DPHAY) is at the top of my list right now. The UK company sells drugs for dogs, cats, and horses in the UK and US. It also has a safe and reliable 1.5% dividend yield. So you’ll earn steady income while riding the pet health trend.

Next up, Virbac SA (VRBCF). The French company is the world’s eighth-largest pet pharmacy. Virbac focuses on antibiotics, vaccines, diagnostic tests, and similar products for cats and dogs. It also has a stable 1.2% dividend yield. So it fits nicely into an income portfolio.

My last pet health pick is Patterson Companies Inc. (PDCO). The company distributes diagnostic and surgical equipment for the veterinary industry. It has a very high 6% dividend yield and a low payout ratio, making it a good fit for any dividend investor’s portfolio.

I’ll be frank: there’s nothing sexy about these companies.

But we’re not interested in flash here at The Weekly Profit. We like safe stocks with juicy dividends that keep making us money, month after month, year after year—stocks that can hold up during a recession or market downturn.

So here’s the thing to keep in mind… the best place to find these kinds of stocks is usually in boring industries like pet health.