“Tell it to me straight: Is the sky falling?”

A friend asked me this a couple of weeks ago, after the Dow Jones Industrial Average plunged 800 points in a single day. It was the worst day of the year for the index.

A lot of people outside of the finance world asked me similar questions, too.

Of course, I understand why. If you don’t know how to read the signs, it really did look like the sky was falling.

So let me put you at ease…

First the “scary” part: The stock market plunged because of a serious economic warning sign called a yield curve inversion.

A yield curve inversion is a canary in the coal mine for the economy. It’s happened before every recession in the last 50 years.

However, there’s no reason to panic.

An inverted yield curve does not mean a recession is imminent. In fact, the last five times the yield curve inverted, stocks actually rose for the next 12–18 months.

Why This Inversion Spooked Investors So Much 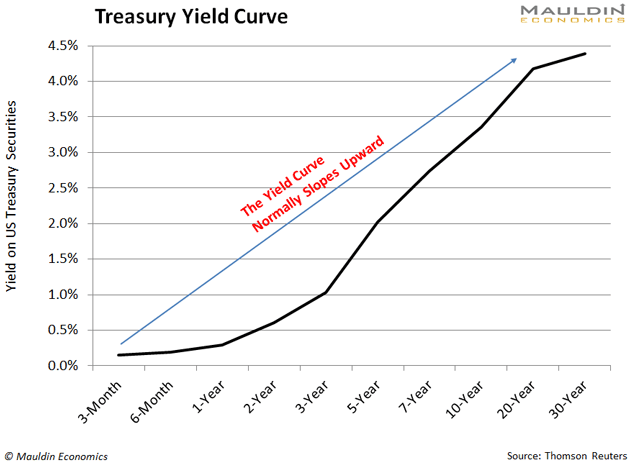 But sometimes, things aren’t so normal.

The last time this part of the yield curve inverted was in December 2005—two years before the financial crisis.

So it’s pretty rare. That’s why the August 14 inversion spooked investors so much… and US stocks suffered their worst day of the year.

A Recession Is Coming, but Not Tomorrow

There’s no way around it: The August 14 inversion means investors expect the economy to slow soon.

Remember, the yield curve has inverted before every recession over the past 50 years. 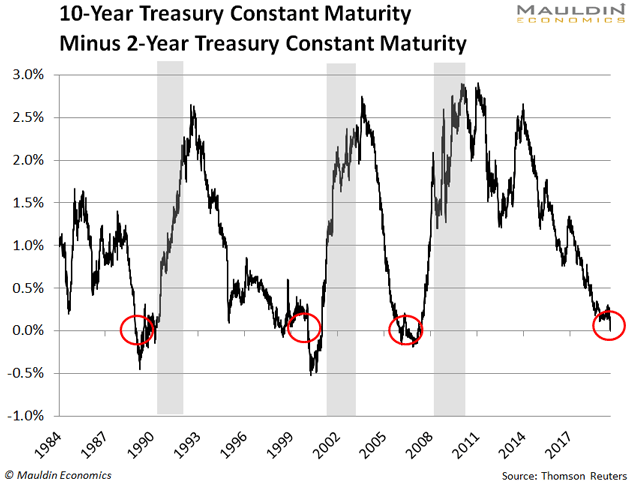 But here’s the thing: Those recessions weren’t immediate. They happened 12 months later, on average.

In other words, we’re probably headed for a recession, but not tomorrow.

If the pattern holds, stocks should continue to rise until about September 2020.

This Isn’t the Time for More Risk

History says the stock market should perform well for the next 12 months. But 12 months can go by quickly.

At this point, buying risky stocks is like picking up pennies in front of a steamroller. You might make solid gains at first, then get squashed and lose a big chunk of money.

Most investors take on too much risk anyway, even in normal market conditions. But with the stock market near all-time highs and the recent yield curve inversion, this is truer than ever.

That’s why, if you buy anything, you want to buy safe and reliable dividend-paying stocks.

Investors buy gold when stock market risk rises. So when stocks eventually do hit the skids, gold and gold-linked companies like Wheaton will benefit.

We saw this at the end of last year. When the S&P 500 fell 15% from September to December, Wheaton Precious Metals rose 23%.

I’ve been beating the drum about Walmart a lot lately. And for good reason. The company has a growing stronghold in the surging e-commerce market, and its stock is safe. Case in point, when the S&P 500 fell 20% at the end of 2018, Walmart's share price actually increased.

That’s exactly the type of company you want to own right now.

CME operates the largest futures exchange in the world. Investors buy futures contracts to bet on whether the price of something will rise or fall. When stock prices go up and down a lot, CME sells even more contracts.

In other words, the company actually benefits from a more volatile stock market.

If history is any guide, stocks should continue to climb for the next 12 months or so. Still, whether it comes 6, 12, or 24 months from now, you want to prepare your portfolio for a pullback now.

That means steering clear of risky, overpriced stocks and adding safe and reliable dividend payers like the three I just mentioned.