If you watch shows like Billions or movies like The Big Short, you see a bunch of super-rich guys flying around in private jets making deals.

And while that’s true for some top hedge fund managers, this popular image is largely a myth.

Hedge funds are a special type of investment company. They raise money from many investors and use complex… and oftentimes aggressive… strategies to invest millions or even billions of dollars.

But as history shows, the average hedge fund performance is often lackluster. In fact, between 2010 and 2019, hedge funds actually underperformed the S&P 500: 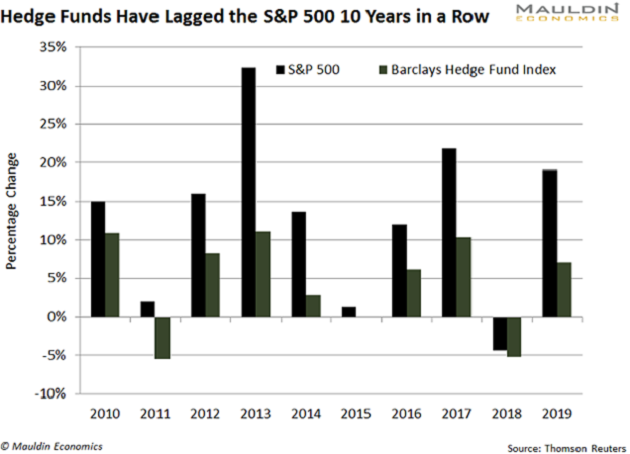 From 2014 to 2019 specifically, the Barclay Hedge Fund Index returned 3.4% annually, barely beating US government bonds. And it severely lagged behind the S&P 500, which grew 10.7% annually during that period.

During this period, you could have simply bought the S&P 500 and beaten those “rich guys on private jets.”

But in the aftermath of the COVID-19 pandemic, hedge funds have regained some of their shine.

The $3 trillion hedge fund industry bounced back in the first quarter.

For instance, data from Hedge Fund Research shows that the average fund was down 7% in the first quarter. That’s compared to a 20% loss for the S&P 500. 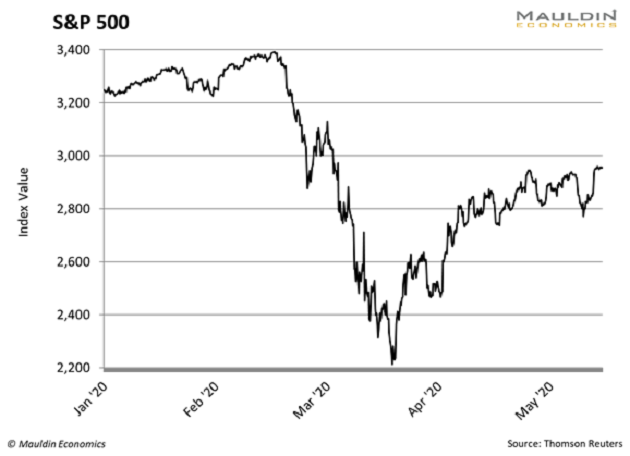 It’s safe to say that hedge funds perform better during times of chaos.

Some of the best-known hedge funds, like Ray Dalio’s Bridgewater Associates, manage $100 billion-plus in assets.

But over the last five years—and throughout this year—these mega-funds have underperformed. For instance, Bridgewater’s All Weather fund tumbled as much as 14% in the first quarter.

While that was better than the 20% decline for the S&P 500, it was twice the average loss for the hedge fund industry.

The investor has been on an incredible run in 2020. He made over $2 billion shorting US stocks earlier this year. After closing his short positions, he put that $2 billion to work with a handful of stocks and lightened up on some others.

One of his top buys in Q1 was Warren Buffett’s Berkshire Hathaway (BRK.B). Ackman boosted his stake in the company, which now makes up 15% of his entire stock holdings.

That’s in addition to biotechnology company Agilent Technologies (A). Ackman upped his stake in the company by 9% in the first quarter. Now, the life sciences firm makes up 16% of the entire Pershing Square stock portfolio.

And while Chipotle Mexican Grill (CMG) remains 11% of Ackman’s total portfolio, he decreased his stake by 10.4% in the first quarter.

This Legendary Investor Increased His Bet on These 2 Stocks

Next on the list we have billionaire Stanley Druckenmiller’s Duquesne Family Office.

“Druck” is famous for outperforming his fellow fund managers. So it’s a good idea to keep an eye on what he’s buying (and selling).

And while he recently said the market is extremely overvalued, that hasn’t stopped him from adding to his stock portfolio.

For instance, Druck has been a major buyer of technology stocks over the years. And the recent sell-off seems to have only increased his conviction. Druck increased his positions in both Amazon.com (AMZN) and Netflix (NFLX) in the first quarter.

After these purchases, the two companies now account for 14% and 13% of his entire stock portfolio, respectively.

But not all his positions made it through the sell-off. For instance, Druck trimmed his position in JPMorgan Chase (JPM).

This Whale Is Avoiding the Same Stocks We Are

While the fund is often focused on beaten-down companies and bonds, the fund’s stock portfolio has served as a source of strong returns over the years.

And this famed investor has been adding to his stock positions this year. While the S&P 500 was cratering in the first quarter, Tepper was a major buyer of US stocks.

His largest buy last quarter was social media giant Twitter (TWTR). This isn’t a huge surprise, as Tepper has long been a fan of high-growth technology stocks.

But what’s most interesting is what he’s selling. For instance, Tepper was a major seller of casino giant Caesars Entertainment (CZR).

It’s possible that Tepper still has a major position in Caesars and is hedging his bet. But with most casinos in bad shape, it wouldn’t surprise me to see him cutting his exposure to the struggling industry.

Keep in mind: All these moves happened months ago. There’s no guarantee any of these funds still hold these positions, as all this data is from March at the latest.

Investing like a top hedge fund requires a lot more than just scanning through regulatory filings. You have to know when to buy, when to sell, and how to position these stocks as part of a comprehensive portfolio that can safely and consistently beat the market—along with a slew of other things most retail investors overlook.

That’s where my premium investment service, Yield Shark, comes in.

The Yield Shark portfolio has done six times better than the average health fund in the past two years. And we’ve done that with a lot less risk than you’d take on by simply investing in the S&P 500.

P.S. My colleagues Chris Wood and Jake Weber are giving away their top biotech stock pick right here–complete with the name, ticker symbol, and target price. This stock doesn’t look like it’s anywhere near Wall Street’s radar yet, but that could all change at any moment. They will tell you why, and what that could mean for your portfolio. Click here for all the details.