“I can’t remember the last bad year for defense stocks.”

One of my Mauldin Economics colleagues mentioned this last week, and he makes a good point.

Yet a lot of investors have ignored defense stocks. That is, until the US killed Iranian general Qasem Soleimani earlier this month. Investors rushed into the space after the news came out.

Since the strike, the iShares US Aerospace & Defense ETF (ITA) has jumped 2.5%. That’s more than quadruple the S&P 500 return over the same period: 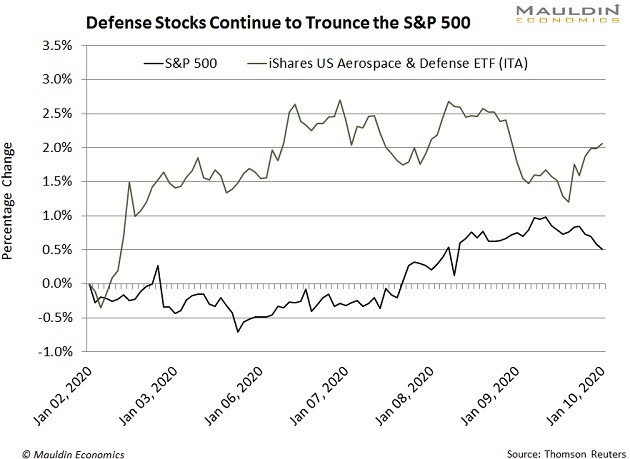 Defense Has Been High on My List for Months

I shared two defense stocks high on my buy list back in May: Lockheed Martin (LMT) and BAE Systems (BAESY). Both have more than doubled the S&P 500 since: 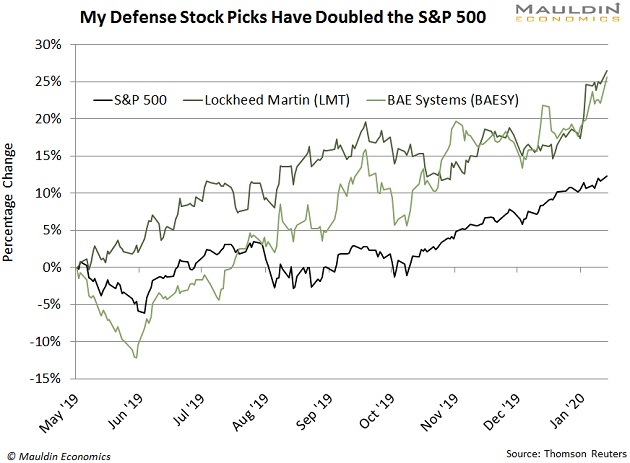 And both companies would still make great additions to any income investor’s portfolio. I’ll also share two more options with you in a moment. But first, let’s look at why the defense industry is so strong.

It Starts with a $700 Billion Budget

The US military is giant.

It employs 2.2 million people. That’s more than the population of Wyoming, Vermont, and Alaska combined.

It takes a lot of money to maintain this massive operation. The US will spend nearly $700 billion on the military this year alone. Even the next biggest military spenders lag far behind: China will spend $168 billion, and Saudi Arabia $82.9 billion.

For perspective, the combined military budgets of China, Russia, and Saudi Arabia are less than half of the US defense budget.

And, no surprise, the US spends 90% of its defense budget on US companies. That means billions of dollars consistently flow into US defense companies.

It’s a very predictable money train, and there’s almost nothing that could stop it…

When the economy slows—as I expect it to in 18 months or so—people spend less and businesses scale back.

Consider the global financial crisis, for example. Between 2008 and 2009, US consumer spending dropped 8.2% and domestic investment plunged 30.1%.

This was not an anomaly. Defense spending grew during five of the six last recessions. You can see this in the next chart, which tracks US defense spending since the 1970s.

Recessions are highlighted in gray. 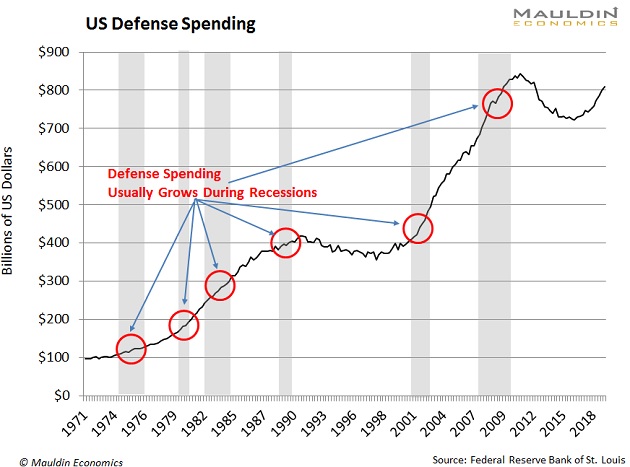 A solid 70% of the US economy relies on consumer spending—everything from people buying groceries to paying their energy bills. During a recession, consumers feel the pinch and spend less.

The defense industry is immune to all that.

There’s no shortage of reasons to spend money on the military. From countering real and imagined threats abroad to supporting veterans and defense-linked jobs… it’s just politically toxic to cut military spending. So it almost never happens.

That’s why companies that do business with the US military earn very stable profits.

The entire defense industry looks attractive, but the best options for us are rock solid defense companies trading at cheap valuations… companies like Raytheon Co. (RTN).

Raytheon is one of the largest missile defense companies in the world. The company generates most of its sales overseas. And as tensions flare in the Middle East, surrounding countries—particularly Saudi Arabia—will continue to buy its weapons.

Raytheon also pays a solid 1.8% dividend yield on a low payout ratio. That makes it perfect for any investor’s portfolio.

Huntington Ingalls Industries (HII) is also high on my list.

Huntington has been the nation’s largest military shipbuilder for over 100 years. It accounts for half of the US advanced tactical warship market. It’s also the only company that builds and refuels nuclear-powered aircraft carriers for the US Navy.

Even better, the company has built over 70% of the US Navy’s active fleet. So it’s the best equipped to repair and service these massive warships.

Like Raytheon, Huntington has a safe and reliable 1.5% dividend yield. It also has a low payout ratio. So it should continue paying steady dividends for years to come.

I recommended Huntington to subscribers of my premium investment service, In the Money, some months back. We’re up 23% on the position, but this stock still has plenty of room to run.

I’m also adding another exciting defense play to the In the Money portfolio later this month. You can access the full portfolio risk-free by clicking here.

Glad you enjoyed the article! I do have a basket of lower share priced stocks I trade regularly for subscribers of my “In the Money” premium newsletter. But unfortunately, I need to save those ideas for paying readers.

That said, certain brokerages let you buy fractional shares. So you could always go that route with LMT and other higher share-priced names.

Robert,
I enjoyed this.  Have been enjoying the climb in LM. (They have an expanding facility here in Atlanta).  Do you have some recommendations/ideas on how to particpate in the defense play with lower priced stocks??  I have a couple of small accounts that are for grandkids so not able to trade these stocks.
Thank you
Jay