The first generation of wireless—called 1G—rolled out in the 1980s. The only thing you could do with it was make a phone call. And the call quality rivaled that of two tin cans connected by a string.

Since then there’s been a new generation of wireless tech about every 10 years. 1G gave way to 2G, then 3G and 4G—each generation faster and more reliable than the last.

Now we’re arriving at 5G. The rollout should be complete around June 2020.

This new technology will let phones and computers communicate 1,000X faster than 4G. It will also make everything from self-driving cars to remote surgery possible.

As with any new technology, investors are clamoring for the “best” way to profit from this trend. That means different things for different people…

The Safest Way to Profit from the 5G Revolution

Some investors are looking for that “moonshot” stock. You know, the one that might quickly shoot up 100% or more.

Of course, those kinds of wins are great. If one of my stocks shoots up 100%, I’m thrilled.

But let’s face it, they’re called moonshot stocks for a reason: They’re not all that safe. You might make a lot of money. But you might lose a lot of money, too.

That’s not what we’re after here at The Weekly Profit.

Instead, we’re focused on safe and reliable dividend-paying stocks. But that doesn’t mean we have to sit on the sidelines.

The First Company to Roll Out 5G

It was also the first provider to start rolling out 5G technology. The company expects to complete its 5G nationwide network in 2020.

AT&T will also directly benefit as other wireless providers roll out 5G.

See, around a third of Americans are AT&T customers. And all of their data will be transferred on the company’s infrastructure. So the more data transferred—the more people call, text, download YouTube videos, and do the thousands of other things we now do on our phones—the more money AT&T will make.

But that’s not the only reason to like AT&T, especially if you’re an income investor.

It’s also part of an elite group called the Dividend Aristocrats. These are companies that have increased their dividends for at least 25 consecutive years.

AT&T has increased its dividend 34 years in a row now. That’s incredible. In fact, only 40 companies in the S&P 500 have raised their dividends longer and more consistently than AT&T.

Safer than the Competition

Over three decades of consistent dividend increases means AT&T’s dividend is certainly reliable. But it’s also safe, as I’ll show you in a moment.

That’s extremely important. If a company cuts its dividend, its share price is going to crater.

The DSI looks at three key things: payout ratio; debt-to-equity ratio; and free cash flow. I’ll walk you through each one.

The payout ratio tells you how much of a company’s net income it pays out to shareholders as dividends. The lower the payout ratio, the better.

Next is the debt-to-equity ratio. No surprise, the more debt a company has, the harder it is to run a business. That includes paying the dividend.

The last thing the DSI looks at is free cash flow. This is the amount of cash the company has left after it pays expenses.

AT&T excels in all three categories. For perspective, I compared AT&T’s DSI score to three major competitors, and it blows them out of the water: 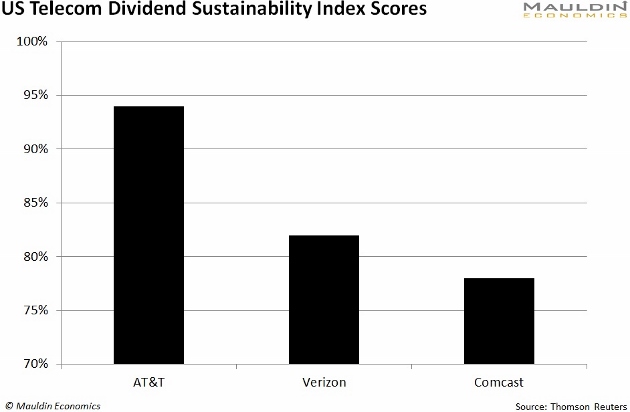 Not only does AT&T pay a higher dividend than these companies, its dividend is also safer.

AT&T Is a Rare Bird

Back in December, I told readers of my premium investing service Yield Shark to buy AT&T.

Only time will tell which “moonshot” 5G stocks soar and which ones plummet. As income investors, we’re not interested in those kinds of risky gambles.

Instead, we’ll play the 5G trend by investing in safe and reliable dividend payers like AT&T.

As a ratio, are you using debt to net worth or tangible net worth? Have you looked at both ratios, and if so, have you noticed a difference in performance?

Does AT&T’s massive debt worry you?
Both my wife & son work for the company & they are watching regular surplussing of their fellow employees.
I agree that on paper T looks good, but peeking under the covers, not so much.