Looks like an interest rate cut could come as early as next week.

Now investors are pricing in a 100% probability that the Fed will lower interest rates when it meets next week, according to global brokerage company CME Group.

This would be the first rate cut since December 2008, when the Fed cut rates to effectively zero and kept them there for seven years.

The Fed started raising rates in late 2015. Then it pumped the brakes after the stock market fell 20% at the end of 2018.

This is good news for US stocks. And healthcare stocks in particular…

As you might know, the Federal Reserve lowers interest rates when it’s worried about the economy.

A lot of the worry here stems from weak manufacturing, housing, and jobs numbers that have come in recently. In these cases, the Fed often lowers rates to try to boost economic activity.

In any case, lower rates are good for stocks across the board. The last six times the Fed cut interest rates during an economic expansion, the S&P 500 gained almost 10% on average over the following three months.

Healthcare stocks did even better. They outperformed the S&P 500 by an average of 7% in the nine months after a rate cut, according to Barclays.

Even when the S&P 500 pulled back 20% from October to December last year, healthcare stocks only fell about half as much. You can see this in the next chart. 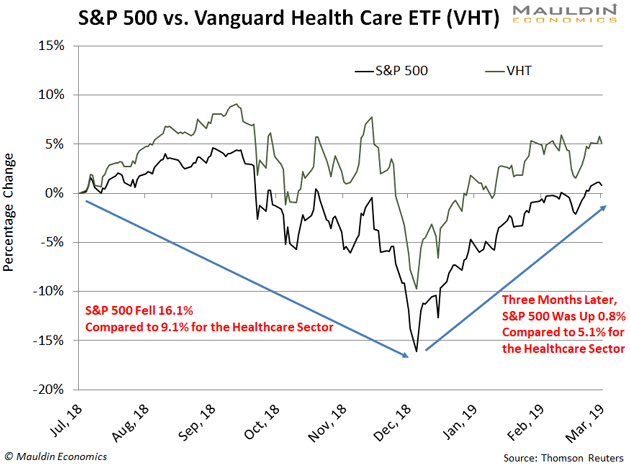 There’s good reason for this. Investors buy healthcare stocks during periods of economic uncertainty because the healthcare industry is remarkably consistent.

For the most part, people spend money on healthcare no matter what. That means healthcare companies enjoy stable revenues. And their stocks can pay reliable dividends.

Nothing Stops People from Buying Tylenol

America’s aging population is a part of the reason healthcare is such a safe bet.

It’s simple: 10,000 Baby Boomers are retiring every day. These people are getting older. And that means they need more medical care.

This translates into very consistent spending on healthcare. In fact, the Centers for Medicare and Medicaid Services (CMS) says US healthcare spending will grow 5.5% annually through 2027. 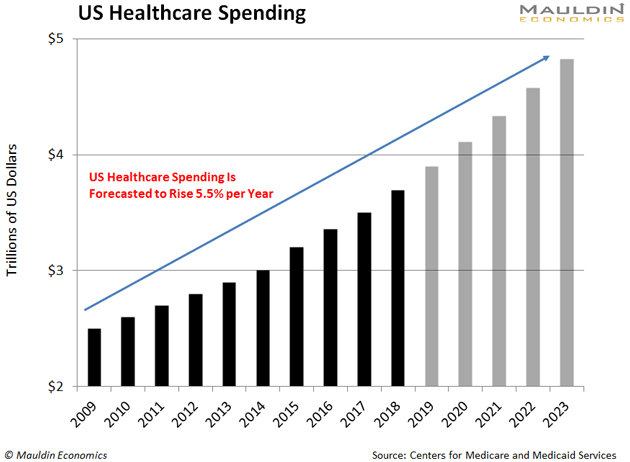 There isn’t much that could stop that growth.

Think about it… the weak manufacturing numbers I mentioned earlier won’t stop anyone from buying Tylenol, or arthritis cream, or diabetes medication.

This kind of reliable spending is why investors buy healthcare stocks when the economy is weakening. People pay for healthcare—period. That means healthcare companies earn stable profits no matter what.

So investors buy in, and stock prices go up.

On top of that, healthcare stocks often pay safe and reliable dividends…

Regular readers know I’m always hunting for the safest and most reliable dividend-paying stocks. And healthcare stocks fit the bill.

See, the predictable growth in healthcare spending means healthcare companies can pay consistent dividends. Plus, many of these companies have long histories of increasing their dividend payouts.

Johnson & Johnson is the largest health company in the world. It sells everything from knee replacements to Tylenol, Band-Aids, and baby shampoo.

Johnson & Johnson pays a 2.9% dividend yield. That’s respectable. But the really impressive part: It’s increased its dividend payout for 47 years in a row. Only 19 companies can top that.

And, with a low payout ratio of 66%, it’s very safe. (Remember, a company’s payout ratio is the percentage of profits it pays as dividends. A lower ratio points to a safer dividend.)

Next on my list is AbbVie Inc. (ABBV). The company is one of the largest suppliers of immunology and cancer drugs in the world.

AbbVie pays a large 6.3% dividend yield. With a three-year average payout ratio of 79%, the company should have no trouble servicing the dividend.

Abbott’s 1.5% dividend yield is small. But the company has increased its dividend for 45 years in a row. With a payout ratio of 79%, it’s almost guaranteed to increase the payout again in 2019.

As Close as It Gets to “Free Money”

While the dividend yields on these three companies are relatively low, their dividends are all safe and reliable.

Buying companies like these and holding them is the key to dividend investing. As I’ve mentioned before, when you reinvest your dividends, you can more than double your returns over the long run—without doing much of anything.

Reinvesting your dividends takes advantage of the power of compound interest. Frankly, it’s as close as you get to “free money.”

So don’t overlook it.

P.S. I talked about another healthcare company in the latest issue of my premium investing letter, Yield Shark. The company pays a safe and reliable 2.1% dividend yield. And it’s increased its dividend 41 years in a row.

As much as I’d like to tell you the name, I have to save the absolute best picks for my paid subscribers. That’s just good business.

But if you want to get this stock pick—as well as the 17 other buy-rated stocks in the Yield Shark portfolio—you can start your risk-free trial by clicking here.

Even though all the things you’ve said about JNJ are true, what is also true is that JNJ is in deep trouble with regard to litigation and their NAV has been dropping like a rock.  While it may be prudent to buy JNJ once the litigation issues are resolved, it won’t be any time soon.  This stock is a sell for the foreseeable future.