This persistent myth likely stems from the 2008 Obama-McCain race. It played out during one of the worst stock market collapses ever. 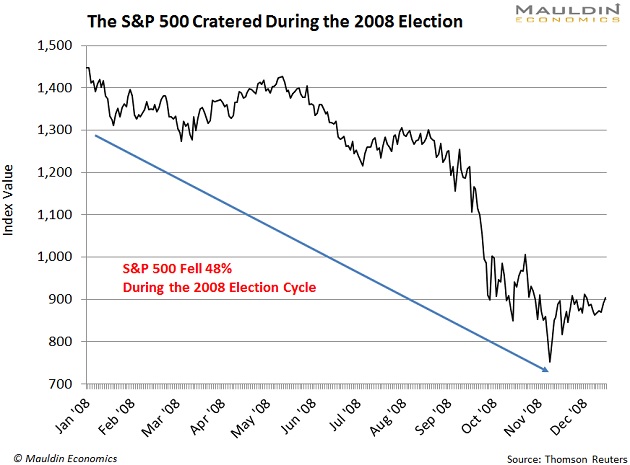 The fallout was terrible. A lot of people watched their jobs, homes, and retirement plans flush down the toilet. Those things stick with you.

The good news is 2008 was actually an outlier. For the most part, stocks tend to climb higher during presidential election years.

A Century of Evidence

Plus, the gains were even higher when an incumbent was running—like Trump is now. (I haven’t forgotten about the impeachment trial. But the outcome is already baked in given the Republican majority in the Senate.)

Regardless of political preference, all investors like one thing: certainty. So they’re less cautious when the sitting president is running for office.

So incumbent presidents have pretty good odds. This tempers investor uncertainty, since they know the sitting president—and his administration’s policies—will likely stay in place for the next four years.

This greater level of certainty shows up in the stock market. Since 1952, the Dow Jones Industrial Average has climbed 10.1% during election years when an incumbent was running. But it’s dipped 1.6% when the candidate field was wide open.

Stocks Get a Double Boost

The incumbent election year should give stocks something of a double boost.

At the same time, we’re already in the longest bull market in history. And, as I’ve mentioned recently, it looks like it’s accelerating.

This all makes now a great time to own stocks… especially in a handful of sectors that really outperform during incumbent election years.

I looked all the way back to 1928. And financials, energy, and industrials were among the top performers during these periods. 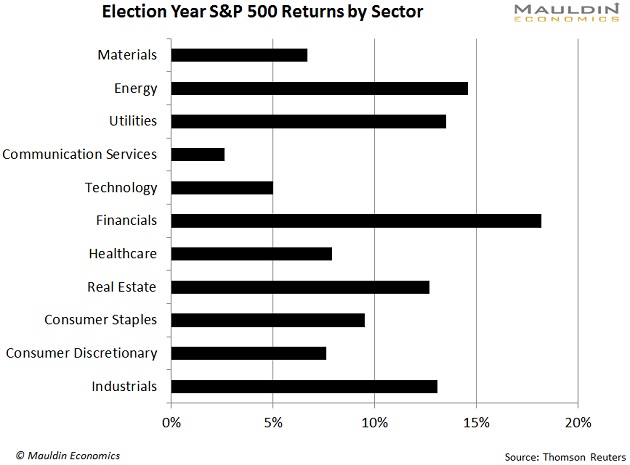 This is great news for us, since all three sectors also pay safe and reliable dividends.

Financial stocks have surged 18.2% on average during these periods. That’s over twice the S&P 500’s long-term average return of 9.0%.

A financials ETF like Vanguard Financials ETF (VFH) is a great way to profit from this trend. It holds a basket of some of America’s most recognizable financial companies, including JPMorgan Chase (JPM), Bank of America (BAC), and Berkshire Hathaway (BRK).

And, with a 2.2% dividend yield, it’s an excellent option for income investors.

Industrial stocks also rank high on our list. They include construction and housing stocks, as well as defense stocks. (Regular readers know defense is one of my favorite sectors.)

The industrial sector has returned 13.1% on average during incumbent election years.

With those kinds of historical gains, it’s a good idea to add the Industrial Select Sector SPDR ETF (XLI) to your portfolio. It’s a who’s who of industrial companies, including Boeing Co. (BA), Honeywell International (HON), and Union Pacific (UNP). It also pays a modest but stable 2.0% dividend yield.

Finally, we have energy stocks. Now, energy has been struggling for the last few years. It was actually the worst performing sector in 2019.

That’s going to make some of you nervous. But energy’s slump also means these stocks are very cheap. Since businesses and individuals will always need oil, natural gas, and alternative energy sources, these stocks will eventually bounce back.

And if history is any guide, it could be this year. The sector’s average election year return is 14.1%.

My top pick to ride this trend is the Energy Select Sector SPDR ETF (XLE). The fund holds many household names like Exxon Mobil (XOM), Chevron (CVX), and ConocoPhillips (COP).

Even better, it pays a massive 6.7% dividend yield. That’s over three-times higher than the yield on the S&P 500. And, with strong and stable dividend payers in its portfolio, XLE’s high yield is very safe.

I’m sure you have your preferred candidate by now. We all do, but we’re focused on one thing here at The Weekly Profit… making money the safe way.

The election itself bodes well for stocks. And historically strong sectors like financials, industrials, and energy are a great way for income investors to profit.

How did you get a 6.7% yield on XLE, looks to me to be a little over 4%.  Are you including the one time payout at year end?

But this incumbent has consistently had an approval rating below 50% and has been impeached though likely won’t be convicted by the Senate. His reelection is by no means assured. Losing a few thousand votes in key electoral states will defeat him. Does this idea hold up in these circumstances. The Presidents that did not get re elected also stumbled. I think investors might not think things will roll along in the same direction if the Democratic candidate is seen as a strong challenger.