America turns 244 years old this weekend. But like a lot of us who’ve turned a year older recently, Lady Liberty’s celebration will be more muted than in previous years.

Cities are largely skipping their traditional holiday parades, festivals, and concerts. Family cookouts may feature fewer people and even more novel meat. And for the 36 million people traveling in America this weekend, wearing a mask might be the least strange part about their trip.

The Year of the Road Trip

AAA expects we will take 700 million trips this summer. That’s about 120 million, or 15%, fewer outings than we embarked on last summer.

That sounds like good news for the economy until you realize that 683 million of those trips will be in a car. Airlines, cruise ships, rail, and other forms of mass transportation are missing out—with business expected to come in at 86% below last year’s levels.

The restaurant industry also relies heavily on tourism. But a lot of eateries—from unique, locally-owned popular spots to national franchises—just aren’t there anymore. 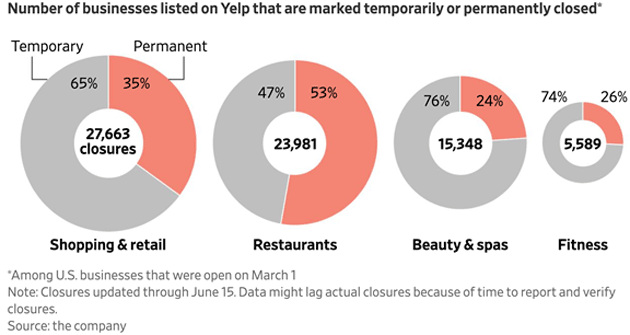 Data from business-review app Yelp (YELP) shows that, as of mid-June, some 140,000 US businesses that closed in March are still closed. And about 41% have closed for good.

For restaurants, that permanently closed figure is 53%. You can imagine what that means for a big chunk of the 2.2 million restaurants that exist all over the world.

The most-searched-for destinations on AAA’s TripTik site this spring were Denver, Las Vegas, and Los Angeles. In reality, many of the folks who do decide to travel will take a “staycation”—traveling mostly locally, or at least avoiding states that require a 14-day quarantine (a la New York, New Jersey, and Connecticut).

If you are hitting the road, be sure to do a Reality Check so you don’t hit any surprise roadblocks on the way to your destination.

If you’re looking to visit beaches, museums, etc., call ahead to see what the local ordinances are. And no matter where you are, you can enjoy socially distant entertainment:

2020 doesn’t look the way any of us thought it would. All around the world, we’re hearing a lot about new coronavirus cases and hospitalizations. And we’re watching protests happening in towns large and small across America.

For many, this is an emotional time. And a sobering one. So it’s easy to feel pressured to make our holidays and weekends feel as traditional as possible.

Whatever you do, stay safe, be well, and do what you can to enjoy this time of celebration… even if that means doing as little as possible.

And, as always, let us know how you are, where you are, and what you’d like to read about here in Reality Check. Our inbox is open 24/7—we love hearing from you! Drop us a line anytime at realitycheck@mauldineconomics.com.

You Have Questions… We Have Answers

Last week we talked about some of the fun technology that “The Jetsons” predicted that’s already here or en route, like flying cars.

Readers sent us some great emails. We’d love to share some of those with you today…

I would like to thank you for this article on the drones. My uncle was Bill Hanna, and he would have been very proud to be remembered in this article. He was a very forward and talented thinker and doer. P.S. He patterned Yogi Bear after me.

RC: Wow! We had no idea when we tipped our hats to William Hanna and Joseph Barbera’s amazing imaginations that we would receive this wonderful note. Thank you for helping to bring so many smiles to our childhoods and to our present, as well!

I am quite sure that the Federal Aviation Administration (FAA) will require the operator of an aircraft to have a federal license. As for ski taxis that transport people, there will be air traffic issues when operating in airspace around airports.

RC: Hi Jim, thanks for your interest in our letter. The article explores the latest advances in autonomous drones, meaning they operate with no human interaction. As we explained, the FAA is overseeing the development and licensing of autonomous drones for commercial use in airspace that is shared with manned aircraft. So, the licensing involves the sense-and-avoid system, the drone itself, and the company managing the use of the autonomous drone.

For drones that are operated remotely by a pilot—where the drone is operated beyond the pilot’s line of sight—the FAA requires a license known as a Part 107 Certification. See details here.

A company called Draganfly were supposed to have a huge government contract to build a ton of drones. The company was also reportedly testing a drone for scanning crowds to detect temperature and possible COVID-19 infection. Does that fit into the drone story?

RC: Good questions. We could not find anything about a big drone contract with the US government. The temperature-scanning drone pilot test was canceled in April 2020 due to concerns about the accuracy of the system, and negative feedback from the community (testing was to be conducted in Westport, Connecticut) and the ACLU.

Thank you, Frank, Jim, nsnodgrass13, and everyone who helps us keep these conversations going. You can do that, too, by emailing us here.