The “Quarantine 15” myth appears to be largely that—a myth.

These days, we may be less active and more stressed. But judging by our recent grocery receipts, we may be offsetting those effects by eating more veggies… whether or not we planned it that way.

And it looks like some of these recent changes in our diets may become a welcome addition to our old routines, when we can finally resume them.

Planting the Seeds of Change

Our dive into the world of meat and meat shortages—whether real or perceived—evoked some great questions from readers like Annie Z. and Vince W. They asked about the shift to plant-based protein and the outlook for those providers.

Even if you have a hard time digesting the idea of alternative meat, the potential for some of the companies in this space can be pretty mouthwatering.

The plant-based meat market had just under $1 billion in sales last year. IDTechEx forecasts the “novel meat” market to top $30 billion by 2030.

But like many other trends, the coronavirus will likely pull that figure into view a lot sooner.

US shoppers—stuck at home and wondering what’s for dinner… or perhaps stuck in stores with limited quantities of conventional meat—have flocked to meatless alternatives. We bought 264% more meatless meats since March.

This is the kind of investable trend we love. Especially when visionary companies are on standby, ready and waiting to feed that need.

The whole story is that the supply chains for beef, pork, and chicken have been massively disrupted. The wholesale meat supply channels to restaurants dried up due to forced business closures. Meanwhile, meat demand at retail grocers zoomed higher.

The result was a supply-demand mismatch and temporary meat shortages across the country. These will contribute to American meat consumption falling by 4%, or about 10 pounds, in 2020.

Will We Keep Our Appetite for Novel Meat?

The fractured meat market has been a boon for companies like Beyond Meat (BYND), Impossible Foods, and Tofurky. If you couldn’t find the real deal, these were the next best thing.

And JBS S.A. (JBSAY)—the company we covered in the May 12 edition of Reality Check—has also thrown its considerable weight into the plant-based meat arena.

Beyond Meat is by far the most notable player and winner. Its shares are trading about 10% above their February 19 high, but still 40% below the July 2019 peak. 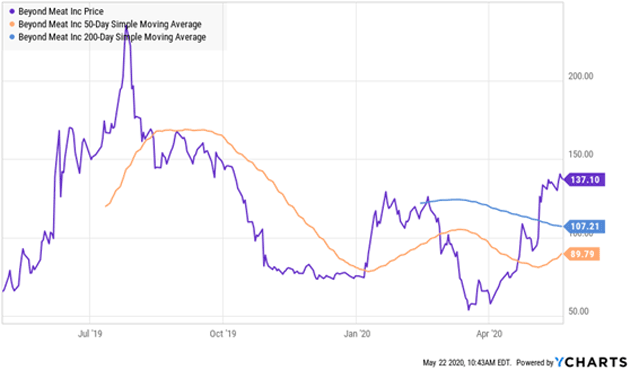 Great caution is the name of the game here. The median analyst estimate for 2020 earnings is around 20 cents. That pegs BYND’s forward P/E at an oxygen-starved 650!

Plus, Bank of America analysis pegs a pound of Beyond Meat at $12, versus $4 for regular beef, which may be hard for some families to swallow right now.

The plant protein story does not end here, however.

The High-Tech Future of Meat

Now, the little known “cultured meat” industry has thrown its hat in the ring.

Cultured meat is meat grown in a lab from cultivated animal cells.

And this is not some kind of harebrained idea. The industry has raised millions of dollars.

The California-based food technology start-up Memphis Meats recently raised $161 million. It is the largest investment in the cell-based meat industry to date.

Another start up in the cell-based meat space is Future Meat Technologies. The company raised $14 million to fund its plan to supply the hardware and cell lines to the manufacturers of lab-grown meat.

It is still very early days in this niche market, but there is one way to play it: Tyson Foods (TSN).

Tyson has invested in Future Meat through the venture capital arm of the company. 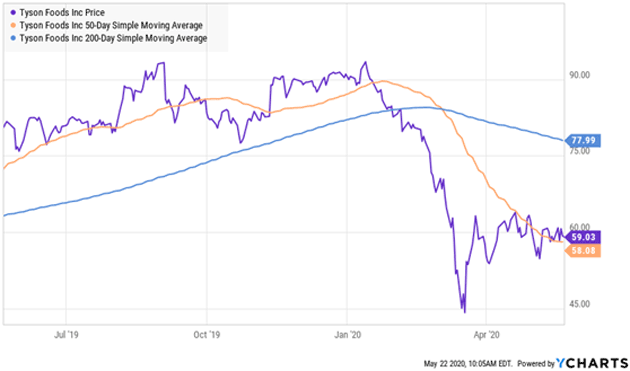 This makes Tyson the largest US meat company to enter the space with its own brand.

Shares are off 36% from their recent high. At $60 per share, that puts its P/E at a very reasonable 11 (ttm), and the stock offers a dividend yield of nearly 3%.

What do you think about a plant-based protein revolution? Does it have legs, or do the products fall short of what’s really appetizing for consumers and investors?

Look for more meatless protein options from Kellogg (K) with its “Incogmeato” burger, Nestle (NSRGY) with its “Awesome Burger,” and Tyson’s plant-based shrimp via its investment in San Francisco-based startup New Wave Foods.

Fun fact: Tyson invested in Beyond Meat in 2016 but sold its share last year. Could faux shellfish be its next prescient bet?

Here are some other juicy nuggets in the news.

No mention of what’s actually in this faux meat. It’s not real food.

Anyone who thinks, for example, that Canola oil (“CANada Oil Low Acid, as in erucic acid, otherwise known as rapeseed oil) is a healthy alternative just doesn’t know the science.  No where in here to you address the issue of the QUALITY of this stuff.

At least Beyond Meat doesn’t use soy, but it’s still grain and bean based.  No thanks. And they ADD iron.  Yikes.  That would have been one ingredient they could have left out to the benefit of males with heart issues and postmenopausal women, as excess iron is a cause of far more cases of heart attack than you’ll ever know.

If you’re imagining a world increasing supplied by phude from a lab vs from nature, you might want to also imagine a world filled with even more chronic illness than we have already, because that’s exactly what you’ll get

Not that eating feedlot beef or factory chicken is a good idea.  Real food raised the right way ... that’s the answer to meeting our nutritional needs while creating a sustainable agriculture system.  NOT faux meat.

You omitted a very large player that has it’s product in 7500 super markets like Whole Foods, Gelsons, and Kroger, and is also providing plant based meat products to Burger King as well as many other fast food chains.  This is Impossible Foods. They have raised close to $500 million dollars and I am an investor in the $500 million Series E last round bringing their total capital raised to $1.3 Billion to date.  If you are doing research for a newsletter please try to give all of the facts.  Below is an article available with a Google search that gives the details

.Impossible Foods, the privately held meat replacement challenger to publicly traded Beyond Meat, said it has raised roughly $500 million in its latest round of funding.

The new investment brings the company’s total haul to $1.3 billion since it was founded nearly nine years ago.

According to a statement from the company, the funding will be used to boost its manufacturing; expand its distribution in supermarkets and other retailers domestically and internationally; and speed up the commercialization of its new line of products: Impossible Sausage made from plants and Impossible Pork made from plants.

“Our mission is to replace the world’s most destructive technology — the use of animals in food production — by 2035,” said Dr. Patrick O. Brown, M.D., Ph.D., founder and CEO of Impossible Foods,  in a statement. “To do that, we need to double production every year, on average, for 15 years and double down on research and innovation. The market has its ups and downs, but the global demand for food is always there, and the urgency of our mission only grows. Our investors not only believe in our mission, but they also recognize an extraordinary opportunity to invest in the platform that will transform the global food system.”

The company also said it was going to change its operational practices to adapt to the COVID-19 pandemic.

Impossible Foods instituted a mandatory work-from-home policy for workers who can telecommute (through the end of April); it also instituted restrictions on external visitors to company facilities and its co-manufacturing partners. In addition, the company said its facilities were undergoing daily sanitizing, disinfecting and deep cleaning of all workplaces to ensure hygiene and safety standards.

“With this latest round of fundraising, Impossible Foods has the resources to accelerate growth — and continue to thrive in a volatile macroeconomic environment, including the current COVID-19 pandemic,” said Impossible Foods chief financial officer, David Lee .

“Our No. 1 priority is the safety of our employees, customers and consumers,” said Brown. “And we recognize our responsibility for the welfare of our community, including the entire San Francisco Bay Area, our global supplier and customer network, millions of our customers, and billions of people who are relying on food manufacturers to produce supplies in times of need.”

As the financing closes, Burger King has committed to sell the Impossible Whopper in all of its 7,000 stores. And DoorDash has launched a dedicated “Impossible Cuisine” category to feature restaurants that offer impossible Foods items.

The sales surge Burger King experienced in 2019 forced the company to quadruple production at its manufacturing facility in Oakland, the company said.

According to Seeking Alpha the Insider selling of shares by Beyond Meat officers in Q1 was $17.6 million and is over $76 million to date in Q2/2020.  On that basis I recently elected to sell my shares (still up 62% from November last year).

What about Ingredion (INGR) as an invest-in-the-picks-and-shovels-instead-of-gold play? They create food ingredients and are very actively working on meat substitutes.