Here’s a quote I picked up on Twitter a few weeks ago—it’s attributed to Richard Russell (paraphrasing):

“A bull market is a bull. It tries to throw off its riders.”

We tend to forget how hard things actually were… 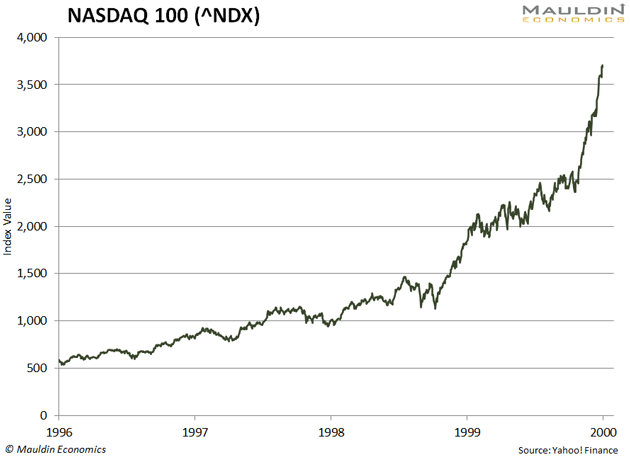 As you can see, there were a lot of bumps along the way. Not the least of which was the LTCM/Russian debt default crisis, which was responsible for a 20% drawdown in the NASDAQ 100 (^NDX)—in the context of a bull market! Not to mention 1997 and all the other associated volatility along the way.

There were plenty of opportunities to panic out of that trade, take your profits because you had made “enough” money, and sit and watch helplessly as the bubble got even bigger.

Another Opportunity to Panic

I bring this up because we’ve had a sizable correction in the inflation trade… concurrent with getting some economic data that we have even more inflation than we thought!

There are some other things going on, like a surge in infections and the (scary music) “delta variant.” With regard to COVID, I would like to draw a parallel with the early 2000s and our fear of terrorism.

The terrorist attacks on 9/11 obviously had an enormous impact on the markets. For the next five years or so, anytime a firecracker went off anywhere in the world, a bomb threat was called in, or a suspicious package was reported, it set off convulsions in the financial markets.

With the Madrid bombings in 2004, and the London bombings in 2005, the impact on the financial markets became more and more attenuated until the market simply stopped caring.

The markets actually closed up on the day of the London bombings, after a furious rally.

Likewise with the virus. The first time around caused a crash. The second time around, it’s causing a small correction. The third time around, the market will rally.

I read a few minutes ago that even Bill de Blasio isn’t mandating masks again in response to the infection surge. Maybe somebody cares, but I don’t know who.

For sure stocks are expensive, and for sure there is a lot of speculation there. I’ll make a rare falsifiable statement: I’ve seen a bunch of crashes in my career, and they usually don’t start out like this.

Of course, things are stupid, and they’re undoubtedly going to get more stupid.

One day in 2003, my mom came to visit me in the city, and I took her to the Lehman Brothers trading floor. I logged into my computers and posed for a picture. It’s some of the only photographic evidence that I ever worked at that place. 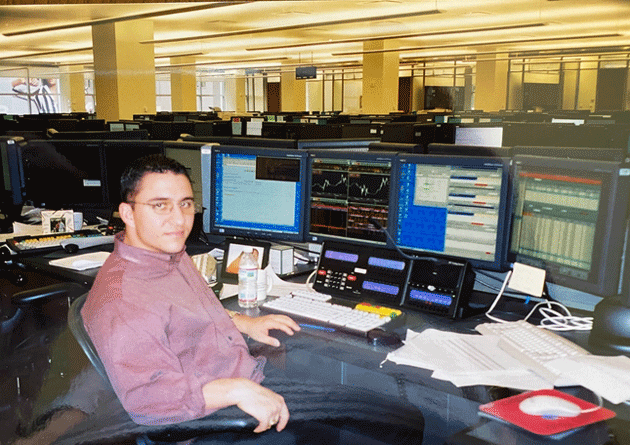 This was before I was running the ETF desk, back in my days of index arbitrage.

I posted this picture on Twitter and a few people commented that I have become better-looking over time. It’s true.

I showed this picture to my wife, and she said I looked sick. I was sick—I was severely bipolar and completely untreated. I wouldn’t get treatment for three more years.

Anyway, the context here is that after three years of eating dirt, the stock market ultimately put in its last bottom in March 2003 and began to march higher.

Hard to tell from the picture, but I believe this was the summer of 2003. I was still bearish, having survived an 80% correction in the NDX and a few rounds of layoffs.

At the time, my time horizon in the market was measured in seconds—the amount of time it would take me to launch a basket of stocks in the program trading terminal and get them filled on the floor of the Merc in the futures pit.

I was the closest thing you could get to being an HFT algorithm without actually being a computer. In short, I didn’t have a lot of perspective.

Perspective is important, and you get perspective from experience.

We’re all staring at the screens, watching the stocks tick every second. But you have to zoom out and look at the market in the context of many decades, so you can tell the difference between the beginning of a generational bear market and a garden variety correction.

Obviously, the point here is that we’re experiencing a garden variety correction, one of many in the context of a long inflationary bull run.

I’ve been writing about the history of inflation and the Fed in The Daily Dirtnap a lot lately—you should check it out.

Conviction is dependent on price—when a trade moves against you, you usually feel a little less enthusiastic about it. Not me, not this time. But if interest rates would stop going lower, that would be great.