At the end of last year, my wife and I started talking seriously about building our dream house.

Our original idea was to buy 20 acres out in the country, without utilities, and start from scratch. But that would have been a lot of work.

One evening, she showed me a listing for a piece of land that was 15 minutes down the road from us. It was almost nine acres and just a stone’s throw from the beach, in the nicest development in the area. It was listed for $480,000.

We looked at each other and said, “Is this too good to be true?”

First of all, where on the Eastern seaboard can you get nine contiguous acres of land? Second of all, it only costs $55,000 per acre? Something’s not right here.

We did some digging, and that was indeed the right price.

I was a trader for nine years. Trading is in my DNA—it will be a part of me for the rest of my life. On the floor of the P. Coast, they would have called this a “berry trade.” Literally, a sure thing.

For the past six months, I’ve been carrying the land on the balance sheet at book value. I figured it might have appreciated a little bit. But I didn’t put much thought into it, until the other day when I was talking with an appraiser. I told him the story of the land, and what I had paid for it.

He said it had at least doubled since then.

I had to pick myself up off the floor. I knew we were having a bull market in property, but doubling and then some in six months? That’s the greatest trade of all time.

Lots of people say that the Fed causes inequality through quantitative easing, but here is a more accurate description: It benefits the holders of assets at the expense of the non-holders of assets.

I traded cash for an asset. The asset went up in price.

If I had held the cash, it would have declined in value slightly in real terms.

Obviously, I’m not a land speculator—I’m just trying to build a house—but that was a pretty good lesson in risk-taking in an inflationary environment.

Think of it in terms of regret—if I hadn’t acted quickly, and I was attempting to buy that land now, I would be experiencing a great deal of regret, like a lot of people who were kicking tires on real estate and never did anything about it.

Fortune favors the bold, at least in an inflationary environment.

In the last few months, I have been making a lot of noise about goods price inflation, but not a lot about real estate, which is too bad because this is one of the biggest bull markets ever—up 30% in a year in some instances. Appraisers and inspectors and surveyors are turning away business, they are so busy.

Remember: Real estate is 20% of The Awesome Portfolio—for a reason.

I’ve fielded lots of questions about whether the equity in your primary residence counts as allocation to real estate, and it does. But if you don’t have that 20% exposure, you might want to get it. 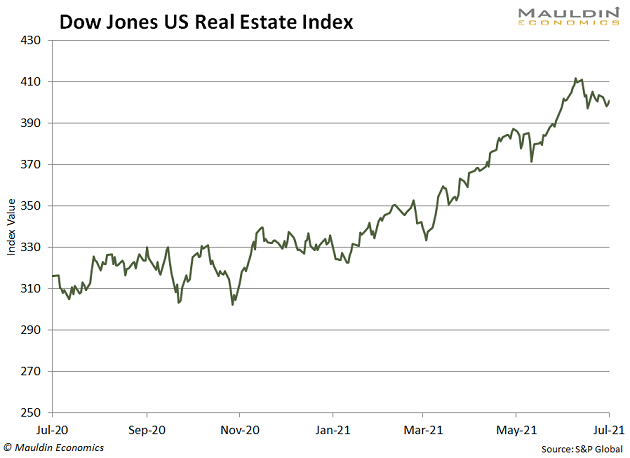 How? REITs are the easy way—it’s been a good six months for REITs.

Or you could buy actual property—just remember to try to achieve diversification. Residential versus commercial, single-family versus multi-family, and of course, don’t forget to diversify geographically.

Real estate investors typically aren’t very good with diversification—they own two rental houses in the same neighborhood, and they think they are diversified.

Am I bullish on real estate going forward? Does a cat have an ass? Yes, as long as interest rates stay low. And incredibly, they have, and have gone even lower.

I’m watching the rates market with some trepidation, as the yield curve has been relentlessly flattening since the Fed meeting two weeks ago. 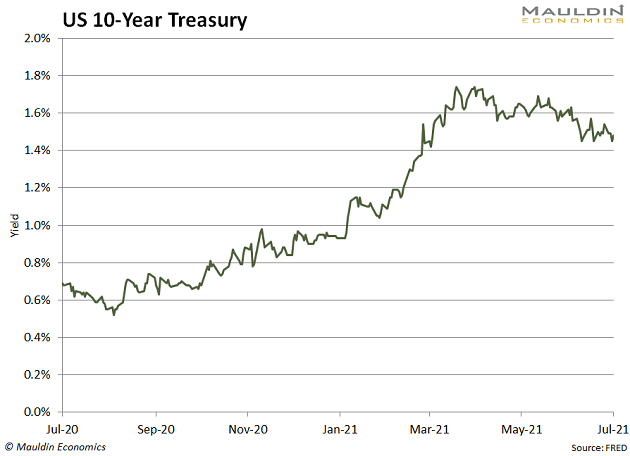 The bear steepening, which is what we got earlier this year, is the rarest and most short-lived out of all the yield curve transformations. I simply do not see a catalyst for it going forward.

In case you missed the party in NYC last week (and you probably did), you’re in luck: I recorded my set. Press play here to see what you missed.