This is a timely issue of The 10th Man, because this month’s guest on The Monthly Dirtcast is Tony Saliba. One of the original Market Wizards, he was a fearsome option market maker on the floor of the CBOE going all the way back to… the seventies.

He also opened the S&P pit on the CBOE on Black Monday, the crash of 1987, which remains the biggest dislocation (and vol event) in the history of all financial markets. The Dow dropped over 22% in one day.

If you want to hear what it was like that day, check out this month’s episode.

Now, in preparation for writing this article, I wanted to brush up on the Crash of 1987, so I let my fingers do the walking: 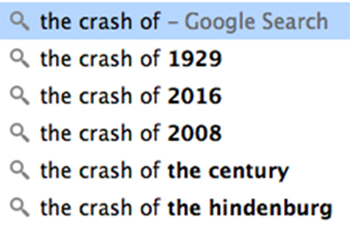 The Crash of ’87 doesn’t even make the list! Wow, short memories.

When I started trading index arbitrage in 2001, people were asking me if index arb caused the Crash of ’87.*

For the record, index arbitrage didn’t cause the Crash of ’87, nor was it a contributing factor.

Arbitrage, as you likely know, is the simultaneous buying and selling of an asset to make money on the price difference. Index arbitrage is the act of arbitraging a basket of stocks with their corresponding futures.

So when people are pounding futures, index arbs will buy cheap futures and hedge with the underlying stocks. Yes, index arbitrageurs were flat out selling stock in 1987, but only because of the monumental selling of S&P 500 futures.

If Everyone’s Doing It…

But the proximate cause of the Crash of ’87 (apart from the geopolitical concerns at the time) was portfolio insurance, a hedging technique marketed to real money accounts.

To understand portfolio insurance, you need advanced options knowledge, but basically it layered an imaginary short gamma position on a long portfolio. This compelled you to sell futures on the way down (to hedge) and buy them on the way up (to get exposure).

A key point to understand about certain strategies in finance:

Nothing bad happens if some people do it, but all hell breaks loose if everyone does it.

You don’t have to be a brain surgeon to realize that everyone selling at the same time could cause problems.

That is what happened. The market declined, which caused portfolio insurance selling to kick in. That made futures cheap to fair value, which caused index arbitrage to kick in, selling a bunch of stock at the same time.

The Dow falling 22.61% in one day was a “25-standard deviation event.” That is an occurrence so rare that if the stock market had been open every single day since the Big Bang… it still shouldn’t happen. And yet it did.

Now you know why people care about tail risk.

You can’t predict when a crash is going to happen… right?

After the Crash of ’87, a lot of people said they “predicted” it. And they did! They had the profits to prove it.

Paul Tudor Jones bet against the market in 1987 and had about the best year a hedge fund could possibly have. An account was written of it twenty years later in The New York Times.

So how did Paul Jones (and Robert Prechter, et al) deduce that the market was about to crash? It wasn’t as hard as you think—the price action was exceedingly squirrelly at the time, and financial pressures were building.

The Crash of ’87 wasn’t a lightning strike. Even people who didn’t predict a crash, per se, had a vague sense that something was terribly wrong. 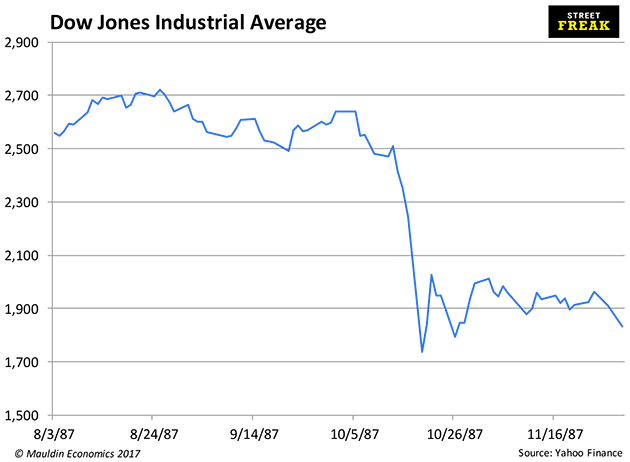 Remember, lots of things in finance are in the category of “if some people do it, nothing bad happens, but if everyone does it, all hell breaks loose.”

That includes being short volatility.

I’ve covered this before in The 10th Man (here, among other places), but let’s briefly go over how crowded this trade is:

All of these things are fine when some people do them—not when everyone does them.

If—make that when—all of these strategies unwind simultaneously, it has the potential to take down the entire financial system. I am not just being dramatic for effect. There has been open speculation about what a violent short vol unwind would look like.

Honestly, this is just a garden-variety crowded trade on Wall Street. A strategy works, people pile into the strategy, and it blows up. Problem is, this one happens to be much bigger than most.

Let me be clear as an azure sky of deepest summer: I am not predicting a crash. I am saying that the conditions that could contribute to a crash are all present, and the likelihood has never been higher.  That may seem like an irritating semantic difference, but I don’t make deterministic statements like the-market-will-crash.  I make probabilistic statements like: the underlying distribution has changed.

Finally, you probably noticed the HSBC chart further up this issue—today’s your last chance to take $100 off Street Freak.

$199 instead of $299 is a great deal for Street Freak. And you won’t find any garden-variety crowded trades in there.

*I was even asked if index arb caused the Crash of ’87 in a bar, one debauched night at the erstwhile Village Idiot in Manhattan’s West Village. A finance student was flirting with me by asking about merits of program trading. That is a weird pickup line. I was so drunk, I lost my coat—forgetting I was wearing it. I barely made it out alive.