I was a pretty good tennis player in high school. I didn’t accomplish much during freshman year, playing exclusively on the JV team, but I felt like I was ready to make the varsity team in my sophomore year.

So during sophomore year, I showed up to the first practice and looked at the ladder. I was ranked 24 out of 25.

Ridiculous. I was clearly a better player than that. Objectively speaking, I was much better than that. I complained to the coach, but he told me if I thought I was that good, I just had to beat all the guys on the ladder ahead of me, and then I could play varsity.

Fine, I said, and accepted the challenge.

Well, high school tennis in Connecticut works like this: when you play a match, the first five guys play singles, and the next four play doubles, like this:

So the coach tells me that he doesn’t want to break up the doubles teams, so if I want to play varsity, I am going to have to beat everyone up to the number 5 guy.

He says no. Doesn’t give a reason. Just no.

So I quit the team.

I stewed on that for about 25 years. It took me a long time to figure out what had happened.

This probably doesn’t come as a shock to you, but I was a very iconoclastic, punk, authority-hating kind of kid, and I had long hair and enough earrings to set off metal detectors halfway across town. I looked a bit like Michael Hutchence or maybe the lead singer from Tears for Fears. In contrast, the rest of the kids on the tennis team looked like Blane and Steff from Pretty in Pink.

It’s so obvious, it’s a wonder why it took me 25 years to figure this out.

You want to play tennis, you have to look like a tennis player.

It is an axiom in life that unless you are unbelievably talented—the best of the best—people are not going to take you seriously if you do not look the part. And even then.

I am a slow learner. It really did take me until about age 38 to figure this out. Even when I worked at Lehman Brothers, I put zero effort into “looking the part.” I had cheap suits and would wear them so long that they had holes in them. Instead of throwing them away, I’d get them patched, like a little kid’s pair of jeans. It’s a wonder I never got fired.

The fact is, personal appearance is really important. More important than you think. There is all kinds of signaling going on when you put on your clothes in the morning. You put on those clothes for a reason—what are you trying to convey to people?

Occasionally, I run across some people who still naively think that what you look like shouldn’t matter. That all you should care about is substance, not style.

But style is substance. That may sound like a very superficial, shallow thing to say—and you can certainly overdo working on your appearance—but it is true.

If Brad Pitt or George Clooney had a mullet and cargo shorts and a T-shirt, you probably would not recognize them walking down the street. If you spent as much time thinking about being cool as Brad Pitt thinks about being cool, you would probably be pretty cool.

I’m not saying my coach was right—that’s a pretty crappy thing to do to a 15-year-old kid, and the tennis team was definitely worse off—but I see his point. I had a part in this as well.

And then you start to think about how things might have worked out differently. If I had just gotten a haircut and stayed on the team, would I have been the number one or two player in senior year? Would I have played in college? Maybe I would still be playing to this day (I took up racquetball instead).

Today, I pay a great deal of attention to my appearance and grooming.  Down to the tiniest detail.  Some would call it an obsession.  You have to, when you’re in the business of selling yourself.

EWZ is up about 100% off the January lows, when everyone thought it was going down forever. 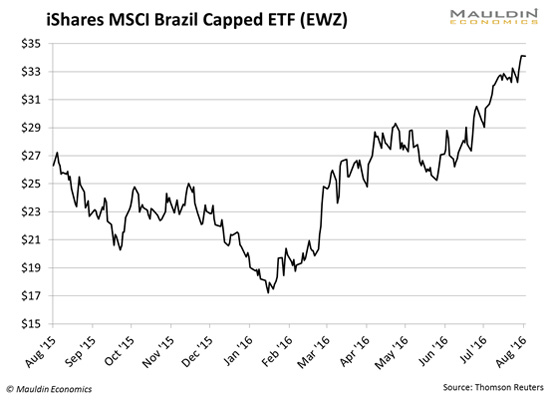 There was maximum bearishness on Brazil going into the Olympics, with the inequality and the poo in the water… meanwhile stocks are launching higher.

There is still an outside chance that Brazil snatches defeat from the jaws of victory and reinstalls Dilma Rousseff—but nothing is better for stocks than bearish sentiment. Party on.