But before we get to that, I’d like to briefly talk about the brand-new issue of Street Freak we published just two days ago.

There’s a mega-trend among investors—and it’s so ubiquitous, you probably don’t even know it’s a trend. (I’m tempted to call it a “fad.”)

This trend was started by academics, was then perpetuated by some of the smartest money managers in the world, and has since then completely taken over the psychology of the retail investor.

As a hardcore contrarian, when I see an omnipresent fad like this, it tells me that the time has come to run, not walk, the opposite way. To that end, we’re recommending a stock in this month’s Street Freak issue that seems to have nothing going for it right now. But it might just be the next big thing—or at the very least, it might prevent you from getting flushed.

To encourage you to join us in this “counter-trend” investment, we’re lowering the subscription fee for a few weeks again. Until September 30, you can get Street Freak at a 33% discount, for just $199 a year.

I suggest you take advantage of this offer and just cancel for a full refund if you don’t like what you see. You have 90 days to do it. But do it soon, as long as the September issue is still hot off the press.

Now on to the issue.

Cash Is an Asset Class

Let’s start off with a game of “name that chart.” 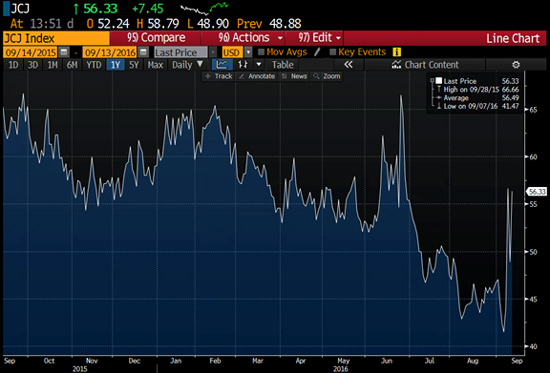 The ticker is a dead giveaway, but I’m betting that most of you don’t know what it is.

This is a chart of implied correlation in the S&P 500.

Many of you have probably heard of the term index arbitrage, that there is a direct mathematical relationship between the stocks in an index and the price of that index.

There is also a less direct relationship between the prices of index options and options on the constituent stocks.

Using index options and single-stock options, you can calculate what is known as implied correlation, which is a measure of how the market predicts stocks will move together.

When there is turmoil in the market, correlation moves dramatically higher. You know this through experience. When the Dow Jones is down 300+ points, you can pretty much assume that all stocks are down together.

Implied correlation is currently spiking higher. Which is not good.

I tweet a lot of sarcasm. And jokes. And more sarcasm. Lately, I have been tweeting stuff like this:

Although I suspect that is an honest question.

People are seriously undereducated on the benefits of being in cash.

The cool thing about cash is that it doesn’t go down. You can’t lose money if you have cash, unless it gets stolen or your bank account gets hacked. We don’t have negative interest rates in the US yet, so you can’t complain about that. If you have money in cash, you will earn zero.

Earning zero is better than losing it!

People get wrapped up in the opportunity cost of holding cash. Screw that.

This is the number one question I get from “less sophisticated” investors.

“I want to invest. What mutual fund should I invest in?”

“Then pay down your credit card debt.”

“Why? I want to invest and make a lot of money.”

“What is the interest rate on your credit card?”

“You can make 20% by paying down your credit card debt.”

“I can do better than that investing.”

Of course, it wasn’t always this way. People’s expectations are grounded in a time when you could make 6.5% a year in cash, and substantially more in equities or risky credits.

I’m being serious… when I tweet out RUN, the answer to the question WHERE? is:

There is no law that says you always have to be fully invested.

In fact, just the opposite. I like to have as much cash as possible at any point in time.

Cash is an option to buy something cheaper in the future.

In my mind, there is nothing worse than being fully invested… on the highs.

The market corrects, and you have no ammo to buy stuff cheaper. You’re trapped in your existing positions.

It’s always good to have cash. Lots of cash.

Many people don’t see it that way. They look at cash as a drag on your returns.

Maybe if you are a large cap growth manager trying to closet index the S&P 500. But as an individual investor, you have no benchmark you’re trying to outperform. You’re an absolute return investor. Same as a hedge fund.

If the whole world were going to crap, you would want your hedge fund manager to be in cash. You probably wouldn’t be happy about paying fees on cash, but it’s better than the alternative.

Remember, you are your own hedge fund manager. And you don’t have fees on cash.

Remember, cash is an option to buy something cheaper in the future.

My guess is, things will get cheaper in the future.

In addition to the rise in implied correlation, there are a lot of other indicators that the stock market is at its most fragile point since the financial crisis. You can read about the investing fad that’s taken over the world and how to sidestep the damage when it eventually comes apart. I suggest you check out my write-up in this month’s Street Freak. You’re saving 33% by signing up today.