I learned recently that we have some new subscribers to The 10th Man. So, let’s review the purpose of The 10th Man.

I’ll give you two charts: the first is a chart of food inflation, which is turning sharply lower. The conventional wisdom is that food inflation leads to broader inflation. 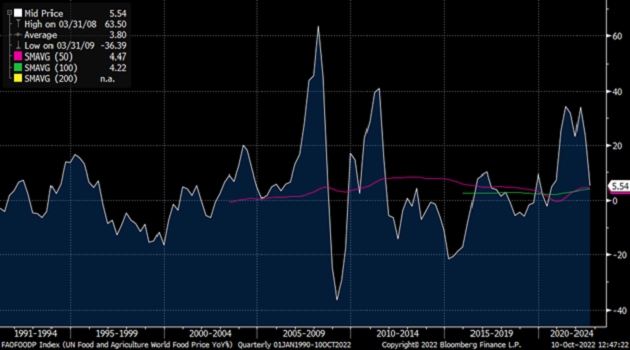 The second chart is one of job openings, which is cratering as the tight labor market loosens up sharply.

These charts are only a sample size of two, but these are highly deflationary signals. And one thing I’ve noticed: the bellyaching about inflation seems to have leveled off a bit. I could blind you with science and put a bunch more charts in here, but there are reams of data saying that inflation is slowing. Like, used car prices, for starters.


I’m writing this before the CPI number is released, and while I’d like to think that this will feed into this month’s number, it might not. We might be doomed to another month in the bond market washing machine. I hope not.

But when I do my chart magic on the bond market, it tells me that we’re pretty close to a reversal. I might point out that it is pretty much the consensus at this point that interest rates are going to go higher. We haven’t had any magazine covers on the bond market, but we’ve had two on the dollar, and if you think the dollar is going to sell off, it’s probably because interest rates went lower. Correspondingly, sentiment in the stock market is at zero. I repeat—zero. There is nowhere to go but up from here.

In the last few weeks, I’ve been called a permabull a handful of times on Twitter. Clearly, those people weren’t following me in 2021. I’m bullish when others are bearish, and bearish when others are bullish. Being bullish doesn’t come naturally to me. I am a guy whose career on Wall Street was born in a big bear market and ended in a big bear market. My trading life was bookended by two crashes. I tend to think that things will crash all the time. But not this time. There is no leverage in the system. This is a valuation bear market—nothing more serious than that.

I think the narrative is growing that the Fed should pause and think about this before blowing up the financial system. Let me be clear: I think it is a good thing that the Fed is hiking rates. They must fight inflation. I think they did it a year too late, but it is good that they are doing it. But these are the fastest rate hikes in history, and it would be smart to take a break and evaluate how the rate hikes were feeding through the system and to see their effect on inflation. Anyway, this is a mess of their own creation, and I’m deriving some degree of pleasure in watching them try to wiggle out of it.