The latest attempt to improve their portfolio is buying “low volatility” stocks.

Everyone knows that some stocks are more volatile than others. It’s not uncommon for some biotech stocks or gold miners to move 10% in a day. McDonald’s will move a half-percent a day—if that. Where people get confused is that they think they can get even more reward for the same amount of risk.

We could follow up here with a diagram and a chart of the efficient frontier, but I don’t feel like getting all academic on you today.

Let’s just say there is a positive relationship between risk and reward, which should be obvious to everyone here. And yet, an ETF of low-volatility stocks has actually outperformed the S&P 500—over quite a long period of time. 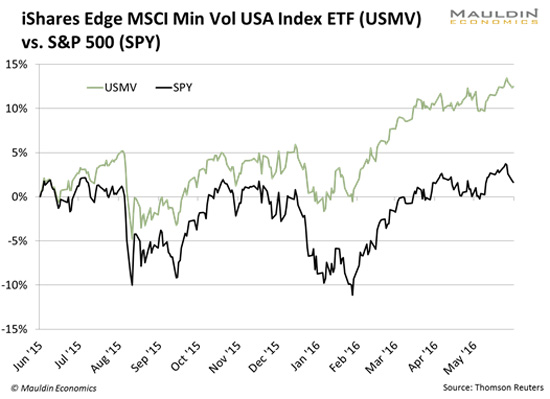 Not just by a little. By a lot.

According to theory and years of market experience, that shouldn’t happen. But it is happening. An ETF that is full of things like…

It isn’t strictly low-volatility stocks that people are piling into, though. It’s also high-dividend payers (which are essentially the same thing). Here’s a chart of the iShares Select Dividend ETF (DVY). It looks the same as the iShares Edge MSCI Min Vol USA ETF (USMV). 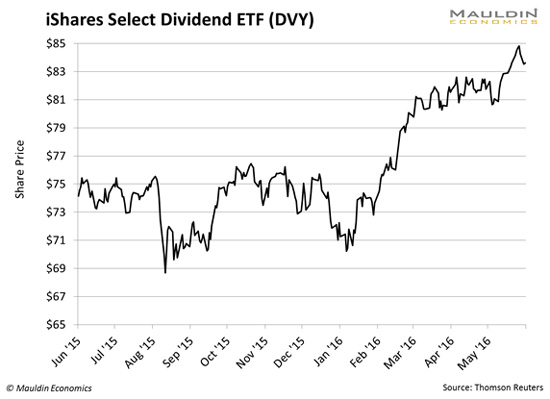 Some people call it a “consumer staples bubble.” A lot of these stocks also fit that description. 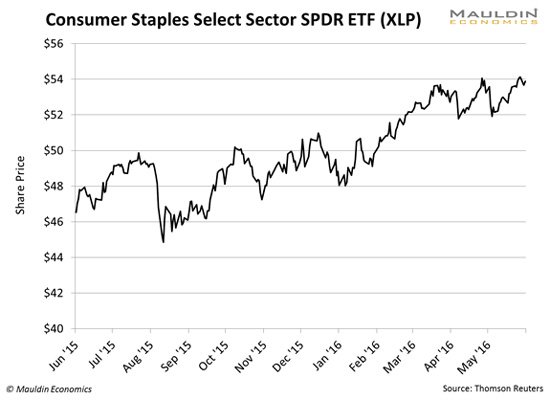 What would the catalyst be?

Tell you what—never ask me what the catalyst would be. I never know. My job is to point out a market distortion and figure out what to do about it. The thing about market distortions is that they can persist for a really long time. We could be talking about low-volatility stocks three years from now.

But I will speculate. Since these are all high-yielders, my guess is that people have been piling into dividend-paying stocks for the same reason they piled into high-yield bonds: fed funds at zero, can’t get anything in a savings account, need to live off some income. All Baby Boomers are in the same boat. That’s at least part of it.

It could take a small crisis or correction to turn low-volatility stocks into high-volatility stocks. My guess is that there is some hidden gamma/convexity in these names that nobody is really aware of. Up on an escalator, down on an elevator.

My piece on Connecticut last week turned out to make quite a splash. It’s cool that people were talking about it. Capital goes to where it is treated best. I have an example of how that can work in the opposite direction—for the better!

My wife is from York, Pennsylvania. When we were younger, we remarked at how similar our hometowns were. Both York and Norwich are what I would describe as “hardscrabble.” You might also recall that the famous ‘90s rock band Live is from York, and that they had a popular song called S--- Towne, about what a dump York was.

I actually got to meet Live once a few years ago, backstage at one of their shows. We talked about schools and property taxes, which is what you talk about when you’re in your forties, I guess.

The funny thing about Live is that… they moved back to York! Back to S--- Towne! Why would they do that?

Because it got better!

Here’s what happened. York is in central Pennsylvania, right near the border with Maryland. It is right on Interstate 83, which is a straight shot into Baltimore. Takes about 40 minutes. I remember visiting about 15 years ago, and all these new houses were popping up along the border.

But here’s the kicker. From 2007 to 2010, Maryland famously imposed a “millionaire’s tax” of 6.25% on incomes of over $1 million a year. Funny thing is, when the tax was imposed, suddenly all the tax returns over $1 million disappeared. So either people found ways to shield income from taxation… or they moved to York.

Judging from how York is booming nowadays, it is the latter. Absolutely crushing it. Real estate values going up, people renovating the downtown row houses (where there was crime and even riots not too long ago), new high-end restaurants, charter schools—it is becoming a fancy, fancy place to live.

It’s so easy, a caveman could do it.

Just a reminder that there’s only 5 more days until All the Evil of This World is released! You can pre-order your e-book today, or wait until the paperback comes out next week. The usual disclaimer applies: it’s not for your Aunt Sally.

There’s never been a piece of Wall Street literature like it. I’m stoked. I hope you are, too.

“figure out what to do about it.”